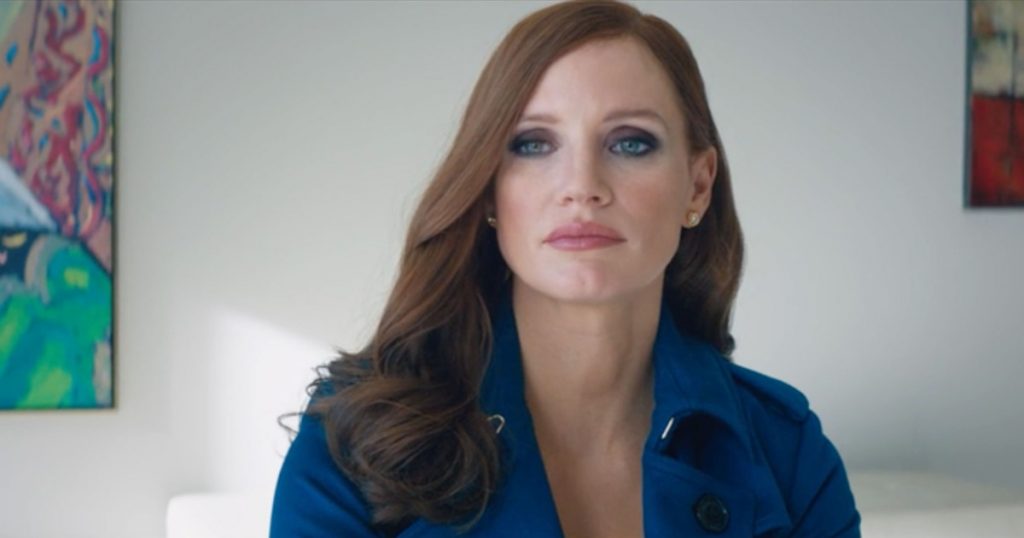 Directed by Aaron Sorkin | Written by Sorkin, adapting the book by Molly Bloom | 140 min | on Netflix 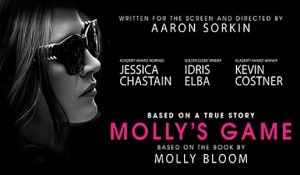 At his best, Sorkin’s words have a knack of making you feel smarter by listening to them. They zip, they zing, they inform, entertain, and surprise. We all felt it in A Few Good Men, Sportsnight, The West Wing, The Social Network, and Moneyball. But he also uses his words to get a little preachy and self-satisfied, like in The Newsroom, and in Steve Jobs he mistook our interest in the genius who made our iPhones by telling an uninspired story of a terrible father. His weakness for sentiment and daddy issues resurfaces in Molly’s Game, and I’m sad to say it almost scuppers the production, but Sorkin’s particular genius for dialogue sings throughout. 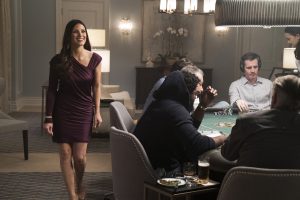 Molly Bloom (Jessica Chastain, typically formidable), was dubbed Hollywood’s Poker Princess. After a bad accident on the slopes, she gave up an Olympic-level downhill skiing career and got a job in LA where her asshole boss (Jeremy Strong) held a weekly high-stakes poker game in a Sunset Strip club popular with celebs and rock stars. Bloom was a fast learner. Before long she was renting a suite in a high-end hotel and running the game herself. We get all this in flashback, shot through with Chastain’s machine-gunned voice-over exposition, while in the present day she’s up on passel of federal indictments for illegal gambling and being in bed with the Russian Mob. She approaches Idris Elba’s straight-shooter lawyer, Charlie Jaffey, for help, even though she’s broke and his retainer is a quarter of a million dollars. 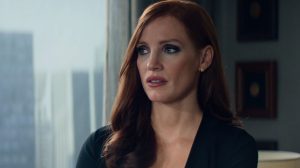 It’s an interesting line Chastain and Sorkin walk with Molly. She’s fascinated by poker, or by men’s fascination with the game, she likes the control the enterprise offers her, and she really likes the money. But she’s also principled, despite swimming with all these sharks, to the point where she refuses to share information with the FBI she’s learned about these wealthy men who gambled in her den. She could save herself from prosecution by trading the dirt, but she won’t go there. Why she protects them, and why she refuses to offer more information on them, is a key part of her story, and this is where Sorkin’s script has a real problem. He casts Kevin Costner as Molly’s father and rustles up a subplot around him that does a disservice to the rest of the movie, as well as to Chastain’s good work. It’s not Costner’s fault—he’s developed a certain conservative gruffness through the years that works in the role—but the script wants to solve her complexity with the most simplistic of Daddy Issues. This is why The Social Network is still Sorkin’s high-water mark in feature films—in that film director David Fincher brought his signature cinematic chill, a delicious moral ambiguity, and an allergy to sentiment that curbs Sorkin’s softer instincts. 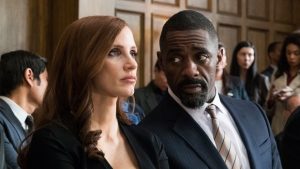 It’s a real shame, the places where Sorkin stumbles, because a lot of the other material here really works. He dives deep into this poker-playing world, and he won’t slow down if you can’t keep up. People don’t really speak like they do in his scripts, but you wish they would, without a pause to mangle a perfectly poised expression coming at you at 180 syllables per minute. Chastain’s impressive articulation is entirely suited, and Elba is almost as good as I’ve ever seen him, with Michael Cera and Chris O’Dowd amongst the squirrelly rich dudes sweating over their chips. These’s also a pleasant undercurrent of feminist retribution as we thrill to Molly’s table turning on obnoxious, entitled fellas and her hiring of an entirely female staff for her games in New York. After the first act I was prepared to retcon my just-published Top 10 of 2017  to find room for Molly’s Game, at the very least an Honourable Mention. 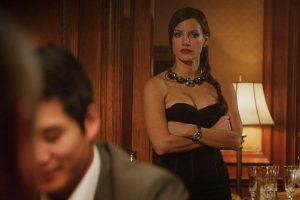 But the places where the picture folds on the river, if you’ll pardon the expression, frustrated me and pulled me back from declaiming greatness. Sorkin the director enjoys the snappy editing to go with his snappy patter, but coming from TV he doesn’t care that his main sets look like sets: the hotel suites and Jaffey’s office couldn’t look more artificial if we could see the lamps in the ceiling, and the syrupy strings applied at key moments feel like they’ve wandered in from some other movie, just like Costner’s Bad Dad. It’s cheap, and both Sorkin and his cast are better than this movie’s problems.