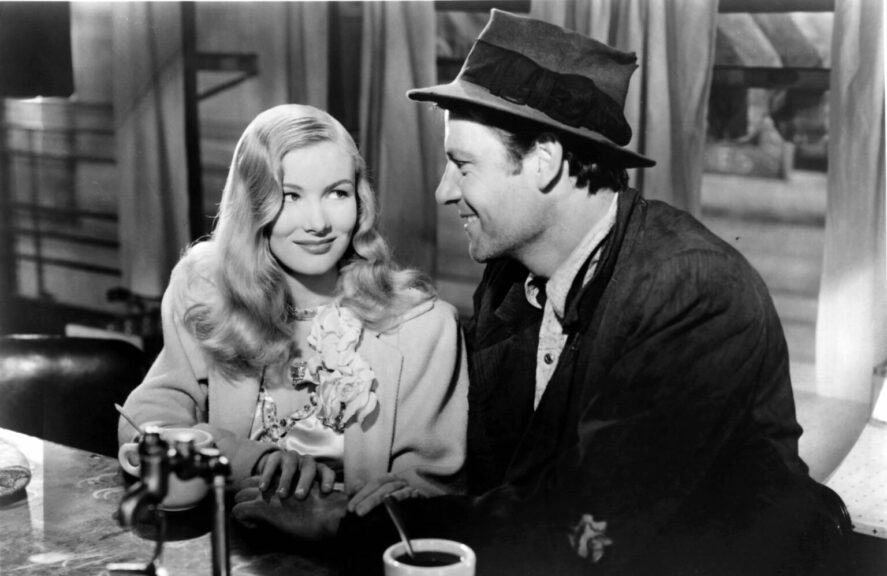 I’m a fan of deadlines — I might not get anything done otherwise. A few dozen features are soon to be dropped from the Criterion streaming channel include a number of classics, near classics, and oddities I’ve never seen (or haven’t seen in ages), so I made a point of watching a few of them while recuperating from surgery this past week. I apologize that my reviews at this late date don’t leave a lot of time to catch up with them yourself, though all are available on DVD and Blu-Ray from Criterion and other distributors. 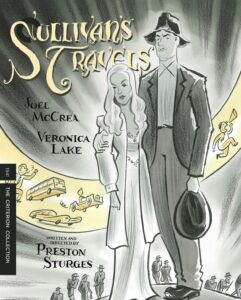 A odd mix of wordy highbrow and lowbrow physical laughs, it’s easy to see why Preston Sturges’ picture is a favourite of the Coen Brothers, who borrowed the title of its movie-within-the-movie, O Brother Where Art Thou. Sullivan’s Travels is about a Hollywood filmmaker (Joel McRae) frustrated by his limitations as a comedy director. He leaves town in a hobo costume “looking for trouble,” hoping to have a real experience of poverty, hardship, and depravation to inspire his new film. Sure, it’s an absurd and offensive idea, but the the picture’s anything but, especially when Sullivan runs into a would-be starlet about to give up the biz (Veronica Lake). Not once, but twice they fall into his swimming pool. You can feel Struges playing with the form here as an undercurrent of seriousness wins out and terrible misfortune tests our traveller. The film makes a decent argument for the value of escapism in an unforgiving world, while offering both gritty drama and escape itself. 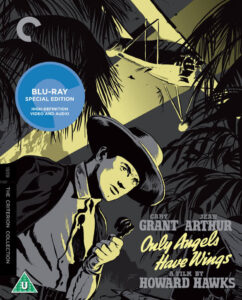 A group of pilots struggle to make a living in a Central American port town Barranca enshrouded by fog and other tricky weather get stirred up by the arrival of a chorus girl. That’s the set-up of Howard Hawks’ picture, but what it’s really about is masculine identity and the romance of dangerous occupations like jungle aviation. Geoff Carter (Cary Grant, going full rogue) runs an airline that delivers the mail, amongst other things, but his pilots don’t have a terrific life expectancy. They are happy partying at a sprawling bar on the airstrip. That’s what Bonnie Lee (Jean Arthur) finds, and despite the fact Grant is pretty much an asshole from stem to stern, she takes an interest — complicated by the arrival of a flier with a past (Richard Barthelmess) and his wife (Rita Hayworth). 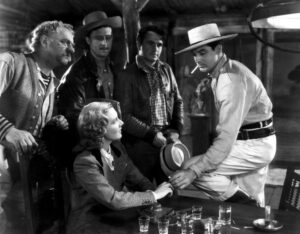 While this is such an old-fashioned movie with its old-fashioned man’s code — it may as well be about the brotherhood of the military, except there’s a big hole where there should be a credo of sacrifice for the greater good — I suppose there’s still some value to be found watching it as a cultural snapshot, and Grant, Arthur, and Hayworth are all magnetic. But, that’s all it is. The misplaced romanticism around dangerous men and the women who love them is as out of fashion as the baggy linen trousers the pilots wear hiked up to their nipples. 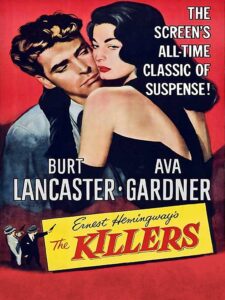 All three adaptations of Ernest Hemingway’s short story are exercises in pitch black film noir. Hemingway was apparently no fan of Hollywood’s treatment of his work, but he had some positive things to say about Robert Siodmak’s 1946 film, which stars a very young Burt Lancaster in his first appearance on the big screen, opposite Ava Gardner. You know how some things are almost too distilled, too pure — you can barely look straight at them? Siodmak’s The Killers is like that, hard-boiled like a 12 minute egg. 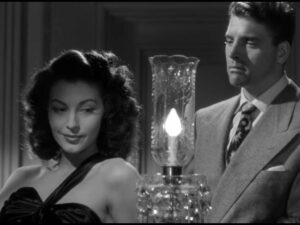 From the Hemingway story it takes only its opening — two gangsters come gunning for someone named The Swede (Lancaster) in small town New Jersey, and start with shaking locals down at a diner. One of the killers is played by William Conrad, who I’ll always think of from the 1970s TV series Cannon. After the Swede is shot and killed, we get an insurance investigator (Edmond O’Brien) looking into his story. He’s a former boxer who fell in love and made a host of bad decisions that brought death to his door. 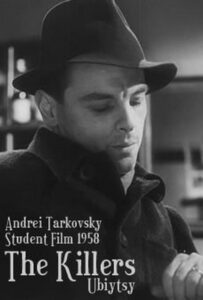 The 1956 adaptation is only 20 minutes long, a student work by Russian auteur Andrei Tarkovsky. Those interested in his work will find this an interesting example of his talent in utero, though it includes an egregious example of a character in blackface. 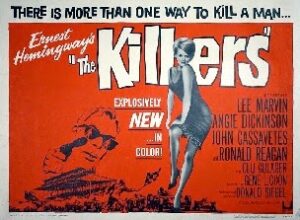 Famed tough-guy director Don Siegel directed the 1964 film, which apparently was originally intended for television but was sent to theatres due to its violent content after the Kennedy assassination. Lee Marvin and Clu Gulager are the killers this time who pop John Cassavettes’ driver/mechanic Johnny North while he’s working at a school for the blind. Then they become the investigators into their quarry, thinking of an even bigger payday. We get the flashback via Claude Akins’ Earl, who tells the story of Johnny’s ill-fated obsession with Californian femme fatale, Sheila Farr (Angie Dickinson), and her criminal associates played by Ronald Reagan and Norman Fell, setting up a robbery and a double-cross. A sunny-looking picture of American darkness, machines, and chrome, the colours pop, and the ’60s suits look sharp enough to cut flesh. Marvin’s gunman towers over it all, one mean mother. 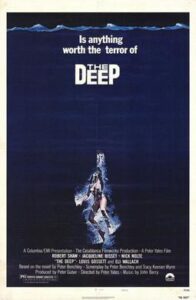 The Deep gets no respect. A hit in the 1970s, it was adapted by Peter Benchley, writer of Jaws, from his own novel. For entertainment value it actually lies somewhere between the big shark movie — much credit also to Robert Shaw here playing another crusty seafarer named Romer Treece — and one of the better James Bond pictures, For Your Eyes Only. 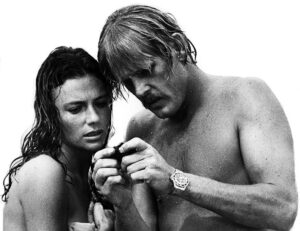 Gail and David (Jacqueline Bisset and Nick Nolte) are holidaying in Bermuda and diving off the coast when they have a big day, finding evidence of both lost Spanish treasure and a WWII wreck full of munitions, including thousands of ampules of morphine. That’s of special interest to area drug dealer Cloche (Louis Gossett Jr), the heavy here. Yes, there’s an undeniable trash on board that’s hard to ignore — more prurient critics at the time made a meal of Bisset’s wet t-shirt, and the Haitian voodoo nonsense feels like a racist dog whistle. 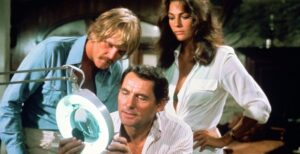 But the thriller beats work well thanks to veteran director Peter Yates, and the underwater cinematography is A+. Anyone who ever dreamed of sunken treasure diving will find things to enjoy here, and with sweet support from Eli Wallach and a lovely score from John Barry, it’s easy to get lost in The Deep on an undemanding afternoon with a couple hours to spare. 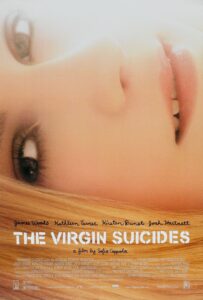 Sofia Coppola’s first feature adapts the Jeffrey Eugenides novel, channeling the suburban 1970s via the ironic ’90s. The mordant humour still translates. It’s the story of a group of boys obsessed with the five blonde, teenaged Lisbon sisters — played by Hanna Hall, A.J. Cook, Leslie Hayman, Chelse Swain, and Kirsten Dunst, who is superb. The girls are sphinx-like to the boys, and to almost everyone else. Kathleen Turner and James Woods are the terrified Lisbon parents, way out of their depth with the mysteries of their own daughters. Josh Hartnett is the excellently named Trip Fontaine, the boy who asks Dunst’s Lisbon sister, Lux, out. He somehow makes a bowl cut work, and gets Heart’s “Magic Man” as his intro tune. 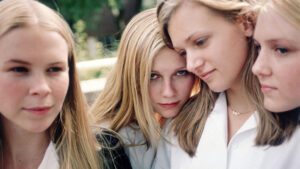 What strikes now is Coppola’s confidence with tone and the thing that would become her signature — the alienations of privilege. It’s also interesting to note how the production design pushes it into what we’d now think of as a Wes Anderson style — he’s Coppola’s peer for sure, but the humour in Anderson’s films frequently comes from a protagonist on a mission wrestling with a heaping absence of self-awareness, while Coppola’s sisters and the boys who worship them gather little flashes of wisdom as they go along, little moments of adolescent truth that light up what otherwise be very dark material. The sun-dappled cinematography, Danny DeVito, and ’70s AM hits (plus Sloan!) on the soundtrack are all just bonuses.