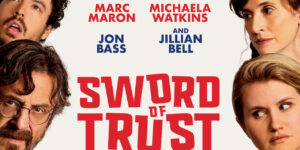 Wow, this is a hard watch. Not because it isn’t a totally charming, shaggy dog story, one of Lynn Shelton’s favourite cinematic landing spots, it’s because that’s exactly what it is. Shelton passed away last week at age 54, her career as a filmmaker includes Your Sister’s Sister, my favourite of her work, as well as Touchy Feely and Laggies, amongst other features and a host of quality work as a director on series. She was beloved in the American indie scene and she had a distinct voice as a humanist filmmaker, it was in everything she did. And, you know what? It’s crystalized in this unpredictable, frequently hilarious final film.

To make it even more bittersweet, Shelton appears in the picture. It’s about a sword, a relic from the Civil War that might be proof that the South actually won, contrary to popular belief and all the history books. It ends up in the hands of Mary and Cynthia (Michaela Watkins and Jillian Bell), who intend on pawning it off at a local shop run by Mel (Marc Maron) and his assistant, Nathaniel (Jon Bass). But that’s where this adventure — and I think it’s fair to call this occasionally biting, if shambolic comedy an adventure — just begins.

Shelton is Deirdre, the woman Mel still loves despite the fact she’s no good for him. That particular sword runs through the film’s heart, and allows Maron — famed as a comedic actor and podcaster — his most affecting dramatic moments to date. His central monologue about heartbreak and drug addiction shatters any pretence that the comedy might not be about real things. 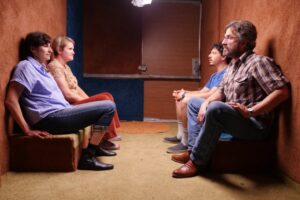 While the humour is driven by circumstance and the odd-couple vibe between the lead foursome, the script takes a few not-so-glancing shots at racist, conservative forces in America. I can’t remember the last comedy that was both so easy going in spirit but still packed with political content. There’s no one here you could call a villain, but what this film is doing is making fun of the culture of misinformation, of people who aren’t paying attention to what’s really going on.

See Sword Of Trust because it’s a lot of goofy fun, and because it’s the final feature of a wonderful American filmmaker. And see it for its sly relevance to our weird political reality.