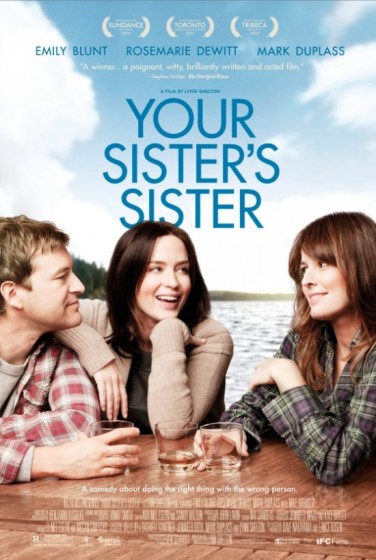 I’ve spent some time recently catching up with movies I missed in cinemas, either because they opened and closed too quickly or didn’t open at all in my town. Here are a few notables now out on DVD. Written and directed by Lynn Shelton

This film is some kind of perfect, tiny masterpiece.

Yes, it’s a story that could have been told on stage with three chairs and two beds, but writer-director Shelton brings in three talented performers (the always reliable and charming Emily Blunt, Rosemarie DeWitt, who I recognized from her work as Don Draper’s beatnik artist girlfriend in the first season of Mad Men, as well as Rachel from Rachel Getting Married, and Mark Duplass) and has cinematographer Benjamin Kasulke show us the arboreal paradise that is the Pacific Northwest.

Iris (Blunt) is best friends with Jack (Duplass), since she went out with his brother Tom. But Tom has died, and a year later, Jack is still dealing with his loss. Jack takes Iris’ suggestion to take some time away out at her family’s cottage in the woods, where he finds Hannah (DeWitt), just recovering from a breakup with her longtime partner. With the help of alcohol, things happen between them that might not have happened otherwise. Before long Iris is there, too. That’s when things get complicated.

The drama and occasional laughs come naturally. The characters are warm and true, and nothing, not a moment,  feels wrong. Even the startlingly loving and forgiving conclusion is right on the money. I expected, and received, the formula drama tropes when I watched this movie, but this was a case where the performers were good enough to elevate the movie beyond the typical.

Sam (Chris Pine, getting better all the time) is a Los Angeles salesman, a selfish guy whose estranged father, a music producer, dies and leaves him a bunch of cash. He could use the money, but Sam finds out Dad had an illegitimate daughter, Frankie (Elizabeth Banks), who already has a son of her own, Josh (Michael Hall D’Addario). (Michelle Pfeiffer, playing Sam’s mom, doesn’t get to do too much but weep when necessary.)

Dad wanted Sam to give Frankie and Josh the money. Instead, Sam weasels his way into their lives, trying to find out as much about them as he can while still holding onto the cash. Of course, his money problems grow, and he gets attached to these people, without them knowing the familial connection.

Yes, the suspense comes from wondering when Frankie is going to figure out the secret, or when Sam is going to tell her. That’s an artificial plot construct that I mostly disliked. I also thought secret siblings Sam and Frankie had weird romantic chemistry, an elephant in the room the film refuses to address. But even as it steps through the expected motions, Pine and Banks are so likeable, so watchable, you want to know how they work it out.

You may even get a bit choked up when you get to watch an important home-movie at the story’s end. Maybe. The Woman in the Fifth

Directed by Pawel Pawlikowski
Written by Pawlikowski, based on a book by Douglas KennedyI used to really dislike Ethan Hawke as an onscreen presence. All the cultural interest in his dishevelled, unwashed self in movies like Reality Bites, that really bugged me. But then he got interesting, started making solid choices with his career. I love Before Sunrise and Before Sunset, and am excited to see Before Midnight in 2013.

This is an odd project, and it confounded me, from the director of the excellent 2004 drama My Summer of Love. Tom Ricks (Hawke), is an American novelist who arrives in Paris with the intention of seeing his young daughter in the custody of his ex-wife, who is clearly afraid of him.

Without much of a plan beyond that, Ricks stays at a grimy boarding house where he does a weird nightwatchman job for the landlord. The owner of a local bookstore, recognizing the author in his store, invites him to a literary party, where Ricks meets Margit (Kristin Scott Thomas), and they begin a relationship. It just gets weirder from there.

This is a film that’s happy to offer up multiple mysteries without anything approaching a solution. As you piece things together, more is left up in the air. I think how much you enjoy the picture depends on how much you’re willing to take on faith. Salmon Fishing in the Yemen

Directed by Lasse Halstrom
Written by Simon Beaufoy and Paul TordayI generally am not a big fan of Lasse Halstrom. I think he approaches the humanism of Ang Lee, but with a touch so soft, so mushy, his films can lose cohesion almost all together. But this time he’s come up with something I really like, a film that juggles drama, comedy and romance in multiple international locations to provide something new. When was the last time you saw a film that incorporated ideas on salmon migration, terrorism and considered the hobby of fishing as an exemplar of faith?

Yes, it’s a romantic comedy, but it stretches in places that surprised me. And it’s wonderfully British in ways that appeal to my latent Anglophilia. I’m not even going to try and detail the convoluted plot, but to say it’s about a scientist who gets roped into bringing salmon to the Yemen through the machinations of the British government, a wealthy Yemeni and a determined financial advisor, and stars Ewan McGregor, Emily Blunt (her again) and Kristin Scott Thomas (and again).

I found it to be a total charmer. “How do I eject?” asks Darius (Aubrey Plaza), the coolest anti-social character in movies this year (taking over where Kat Dennings left off in Daydream Nation). She interns at a Seattle culture mag, that sends her, another intern (Karan Soni), and a reporter (Jake Johnson) on assignment down the coast to a small town, investigating a guy named Kenneth (Mark Duplass, yup, him again) who put up a bizarre classified ad, looking for someone to join him for a spot of time-travelling. They even get a budget!

If you accept this fantasy of what magazines do (and who places classified ads anymore, anyway?) you get a fun little off-beat comedy that goes unexpected places. For instance, the shallow, obnoxious reporter winds up hooking up with an old flame, which becomes a surprisingly moving, if somewhat unresolved, subplot. And, of course, Darius and Kenneth have a connection. It’s light, but a good time with a joyful finale.