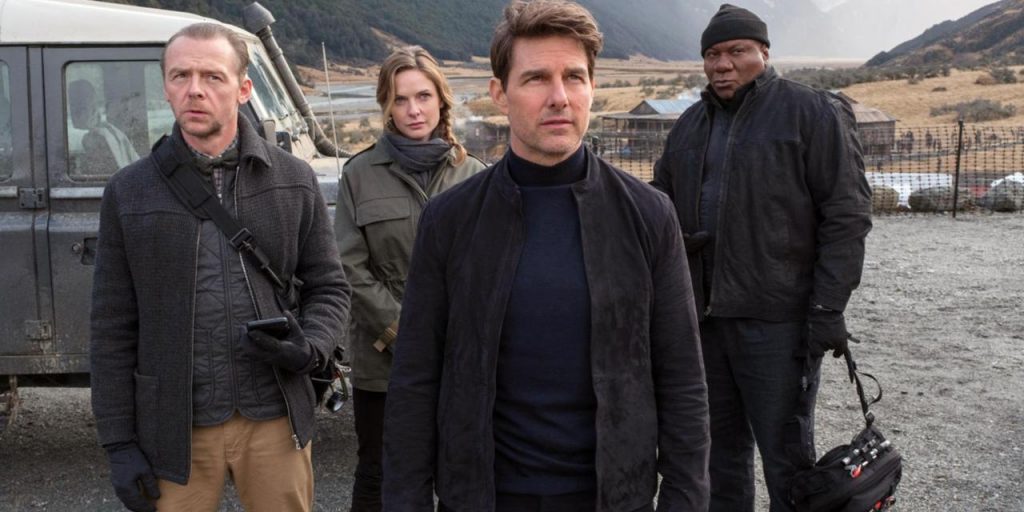 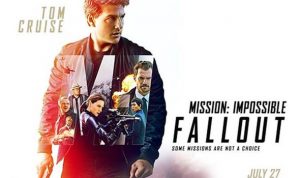 The Mission: Impossible franchise has proven surprisingly hardy. This is the sixth entry, going back to Brian DePalma’s 1996 movie, the first cinematic adaptation of the Bruce Gellar’s TV series, turning 1960s spycraft into a pre-millennial Tom Cruise action picture. Until this one, each subsequent entry has brought in a fresh director to mix up the flavour—the Alien franchise trick—but this is McQuarrie’s second appearance at the helm, following his delivery of the series-best entry, Rogue Nation. In order to maintain a certain non-continuity of style, he pointedly chose a different, more emotional tone than the last film, and a different look. Many of those choices ring clear, delivering another exciting, high-potency action film, a strong entry in the popcorn franchise. If it’s not perfect, it doesn’t steer wrong often. 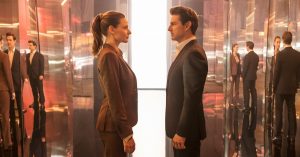 Full credit to star and producer Tom Cruise. He knows what works here, and that people will pay to see him put himself in mortal danger performing a series of jaw-dropping stunts. It’s a smart move for as long as the 56-year-old is physically capable, sort of the Jackie Chan career arc. In this era of over-use of CGI, turning many Hollywood action sequences into animated mush, seeing someone actually do these things on screen brings an extra frisson of fun to the experience. It makes the picture feel more authentic, and weirdly, more for adults. 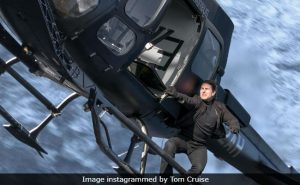 Mission: Impossible – Fallout works as a direct sequel to the previous film—bringing back Rogue Nation‘s Scandi-MVP Rebecca Ferguson as Ilsa Faust, who deserves her own spinoff feature, and the glowering Sean Harris as the villainous Solomon Lane—while also serving as a kind of M:I Greatest Hits; The Crown‘s Vanessa Kirby plays a crime syndicate bigwig named the White Widow who is the daughter of Max, Vanessa Redgrave’s character from the first film, Michelle Monaghan, who first appeared as Ethan Hunt’s wife, Julia, in the third film, returns, as do fan favourites Ving Rhames and Simon Pegg, Hunt climbs sheer rock faces like he did in the second film (the only outright disaster in the series), and the team has to race to defuse a nuclear weapon armed by a madman, like in the fourth film. 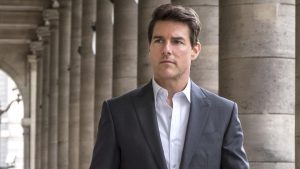 The action set-pieces are flawless: A double-barrelled car/truck/motorcycle chase through the streets of Paris is terrific, as is the sequence where Hunt is on foot across London rooftops from St Paul’s to the Tate Modern, and a concluding helicopter chase through mountain canyons (wherein Cruise actually learned how to pilot the chopper) gets an A+. The film also includes at least two patented Mission: Impossible reversals—they’re delightful. And the score, by Lorne Balfe, feels very true to the standards set by previous composers—effectively adapting the famed Lalo Schifrin theme to various beats and scenes—while also channelling Hans Zimmer’s Inception and Interstellar scores, providing huge bangs when most needed.

The missteps are small, but still worth mentioning, and keep Fallout from topping the best of the M:I list, but only just.

Watched in 3D, the film looks muddy in comparison with the last one, with McQuarrie and his DP, Rob Hardy, utilizing far too many Abrams-esque lens flares, especially in the darker interiors of the first act. I get they wanted to change the mood this time out, but this isn’t the answer—it’s especially egregious when you look at all the marketing materials, which promise a much brighter, clearer movie. Granted, 3D can often make films look dark and gloomy, so I’m hoping to revisit the picture in IMAX and will report back if I have a better experience.

Speaking of marketing, the concluding shot in the film’s first trailer, of Hunt in a helicopter flying toward a jack-knifing 18-wheeler, is nowhere to be found in the film. It’s unwise to sell your action movie on such a terrific moment and then not deliver.

The script offers too much clunky dialogue off the top, and it puts some of those words in the mouth of Angela Bassett, who is sadly wasted here, and in the mouth of the new face at the IMF, August Walker, played by huge hunka beefcake, Henry Cavill. This guy is one stiff performer, which works when he needs to be Clark Kent, but he’s too often “seen to be acting” in other roles, like in that other woulda-coulda been spy franchise, The Man From UNCLE. He does manage to impress by the end of this picture, despite the fact the script tips you off to his real loyalties far too early. 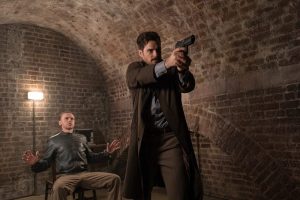 Cruise the producer and presumed cast hirer is cleverly trumping any possible vanity from Cruise the performer: Cavill’s Walker is younger, bigger, and more handsome than Cruise’s Hunt, and in a toe-to-toe donnybrook would probably hand Hunt his head. Having Walker in the corner of most frames of Fallout makes for a looming threat that pays off in a big way later on, with an arched eyebrow and a massive machine gun in his hands.