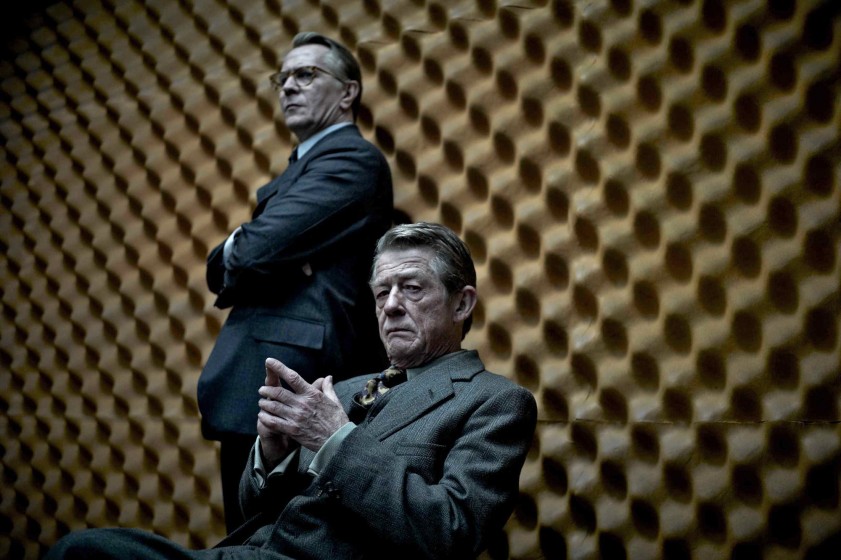 In the past two posts I review Harry Palmer movies and a dozen spy pictures from 1966 to 2006. This post is devoted to the film adaptations of the godfather of spy novels.

Roger Ebert described John Le Carré’s novels as “chess problems in which one solution is elegant and all of the others take too many moves.” There’ve been many through the years, and what follows is an incomplete list. Sidney Lumet directed a Le Carré in 1966, called The Deadly Affair, starring James Mason. I’m still tracking this one down, and have yet to see The Little Drummer Girl (1984), directed by George Roy Hill. 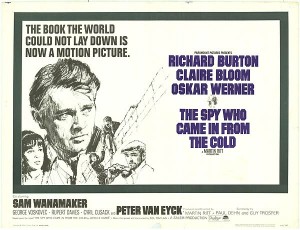 Maybe the least glamorous spy movie ever, it’s about a very embittered and angry fellow—with Richard Burton effortlessly conveying those emotions—working in British intelligence who is asked to defect to the enemy to help sow disinformation about an East German intelligence officer.

The first act is Burton playing the very convincing role of an alcoholic former intelligence operative living in the run-down London neighbourhood working in a library and beginning a relationship with Clare Bloom. Then he’s off to the Netherlands where he’s interrogated by Sam Wanamaker. Eventually there’s a tribunal. The conclusion in East Berlin is about as harrowing as it gets.

It’s very wordy and very bleak, and no one gets out alive. 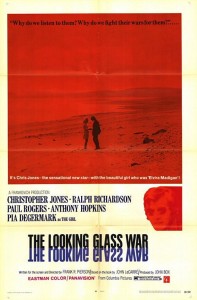 This one’s got some pretty avant garde stuff going on in its look, like a 360-degree camera pan in a pub. Christopher Jones is a Polish refugee, Leiser, who gets recruited by the British secret service to sneak into East Germany to investigate the possible existence of intercontinental ballistic missiles. He’s trained by Anthony Hopkins, and includes a great wrestling scene between the two of them. Leiser seems irresistible to women, including Susan George, but has there ever been a less sympathetic hero? He beats women and kills people for no good reason. About halfway in Leiser goes on his mission and the rest of the spy masters disappear, and then it’s something of a roadtrip across Spain (passing, poorly, for Germany). 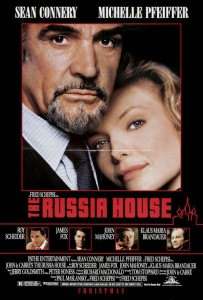 Maybe my favourite Le Carré, I’ve watched this film repeatedly through the years. Sean Connery is boozy Barley Blair, a publisher. The British secret service intercept mail sent to him from a Russian scientist and interrogate him in his Lisbon home, eventually forcing him to travel to Moscow and St Petersburg find out whether the classified documents the scientist sent were real. There he meets a friend and former lover of the scientist, played by Michelle Pfeiffer at her most luminous. 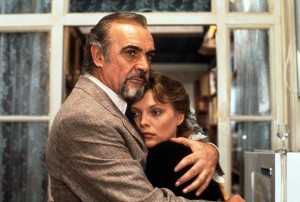 The May-October love affair is unlikely but their chemistry is genuine, and I think this is one of those spy thrillers that works just as well as a romance. At two points in the movie the plot deftly flashes back, to give you a different perspective of events we’d seen previously. The locations are gorgeous, and Roy Scheider and Ken Russell are both along for the ride. There’s great Branford Marsalis sax in the score. It has a sweetness missing from a lot of spy movies. It even ends with a freeze-frame.

For more on this film, please go here.

The Tailor of Panama (2001), directed by John Boorman. 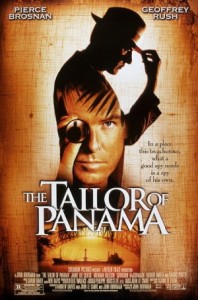 Geoffrey Rush as the titular tailor who knows everyone, shows Pierce Brosnan’s smug and exiled MI:6 agent around Panama City. The film dips into satire, but it all feels a little lugubrious and the colonial overtones are a bit much. Brendan Gleeson plays a local Hispanic character, which is objectively a terrible idea, while Rush sees visions of the spirit of his dead partner. Jamie Lee Curtis is also weirdly cast as Rush’s wife. None of it works. 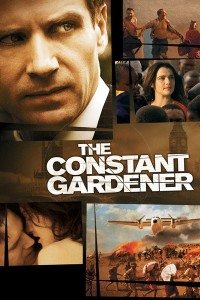 This is a gorgeous-looking piece about a heartbroken British diplomat in Kenya whose activist wife (Weisz) has been murdered. Turns out she was investigating the work big pharma was doing locally and had evidence that they were testing drugs on the African populace with dangerous side effects, but hiding those results in order to avoid further expensive development and get the drug to the market. This is a great movie, but one with a genuinely tragic love affair at its core, and its message about corrupt corporations taking advantage of the impoverished is bitter and brutal. Probably accurate, too. 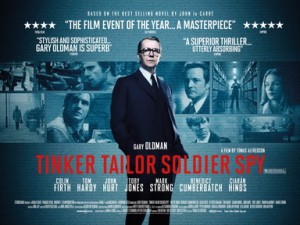 Gary Oldman is Smiley, along with the best thespian stock: Colin Firth, Tom Hardy, John Hurt, Toby Jones, Mark Strong, Benedict Cumberbatch, and Ciarán Hinds. It’s about the effort to sniff out a double agent in the heart of British Intelligence, and is as dense a spy drama as has ever been made. I’ve seen it twice and I couldn’t accurately describe the plot, but will say that it never fails to grip, with the talent above all bringing terrific work in perfectly appointed 1970s sets, costumes, and hair.

A Most Wanted Man (2014), directed by Anton Corbijn, and written by Andrew Bovell. 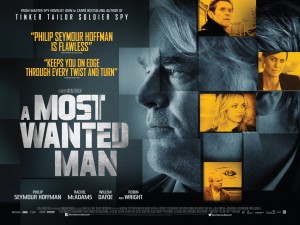 Philip Seymour Hoffman in one of his last leading roles, as a disheveled and disenchanted German spymaster working in Hamburg, who’s still trying to make up for the failure of 9/11 by running a team of people trying to recruit individuals with connections to terrorist organizations, also starring Rachel McAdams, Robin Wright, and Willem Dafoe. It’s a solid and compelling spy movie, but it suffers in that same old Hollywood tradition of English-speaking actors speaking in German accents, acting among German actors speaking English, and no one sounds quite right. It’s awkward, and it bugged me as much as it did in The Odessa File. I don’t know what the secret is to making it plausible, but this particular trope needs to end.

For a more details on this film, please click here.

If you’ve managed to read these three-part, 5000-word posts, thank you. They will self-destruct in five seconds.