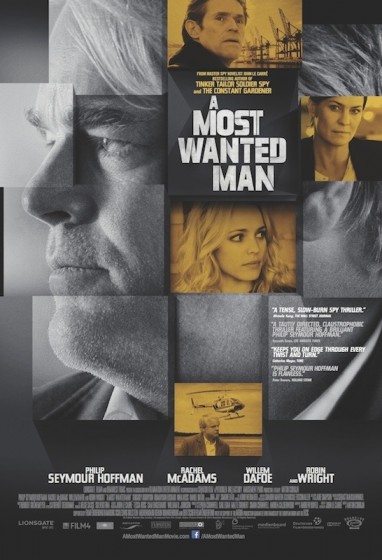 As Gunther, a heavy drinking, heavy smoking, cynical and burnt-out German spymaster, Philip Seymour Hoffman has left us yet another character unlike anything else he played. As if his legacy wasn’t already solid. Gunther feels at least 20 years older than the age Hoffman was when he died, 46. He accomplishes this illusion through the stones in his voice, the stoop in his body, and that special magic the actor put into his work.

Gunther is carrying the guilt of mistakes made. Friends and colleagues who died in Beirut some years back, and 9/11, which left egg on the face of all Western intelligence operatives.

Now he’s consigned to the grimy, industrial streets of Hamburg, trying to track down a man named Issa (Grigoriy Dobrygin), a Russian national recently arrived via Turkey, an Islamic fundamentalist with a questionable past looking to make contact with a magnate named Abdullah (Homayoun Ershadi), who may or may not be funnelling money to terrorist groups.

What distinguishes Gunther from his colleagues, including the weaselly head of Intelligence in Hamburg, Dieter (Rainer Bock), is his patience. He recognizes that in order to exercise any kind of control over the opposing forces in the world requires time, it requires building relationships, controlling information.

Martha (Robin Wright) from the CIA seems to get it, and her influence buys Gunther 72 hours to secure Issa and find out what he knows about Abdullah. Issa is represented by Annabel (Rachel McAdams), a crusading and idealistic lawyer who may be forced to compromise her values if she’s to protect her client.

As is typical of protagonists in Le Carré novels, Gunther’s ambitions may have the world order in mind, but he operates in micro: how to best protect the individual from a machine that will crush them and end up helping no one. And Gunther is committed to his soul: if his quarry is lost, so is he. Dieter doesn’t get that—he sees the short term security benefits of force, rather than the long game reward of waiting.

Corbijn orchestrates all of this with a sharp eye to the slick cobblestones and industrial chic of Hamburg, as well as the desperate human dynamics. Rare is the film that improves as it goes along, and after a bit of a muddled start, A Most Wanted Man settles into its plot machinations going into its second and third act, the suspense swooping.

But even while acknowledging a slightly anticlimactic conclusion, I very much enjoyed where the film took me. Hoffman can be credited with some of that pleasure in his performance, and I especially liked what McAdams does here. Her character draws the men in the story to her—both in her physical appeal and her moral determination—and though she can be a bit too light for this kind of material, she kills it here. And Willem Dafoe is credibly crusty as a banker/broker soured by the compromises in his life.

One other thing to say about A Most Wanted Man. While I recommend it, the part of the film I found most distracting was the old Hollywood convention of American actors playing Europeans and  speaking English with European accents, while often performing opposite actual German actors speaking English. It makes for a peculiar vowel soup coming out of people’s mouths, some more convincing than others. For a picture striving for a deep level of grit and authenticity, it can feel a bit contrived as a result.

Maybe a German filmmaker will remake it with German actors speaking German. I’d watch that.