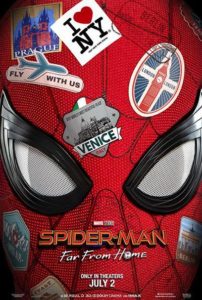 …or Peter Parker’s European Vacation. And who could blame the guy (winningly played by Tom Holland again) for wanting some downtime? For a 16-year-old, he’s had more than his fair share of grief—with the passing of a father figure, Tony Stark (Robert Downey Jr, present here in flashback and frequent mural), and the resumption of what can only seem like a weird, stressful life following the five-year gap detailed in Avengers: Endgame, here referred to as The Blip. 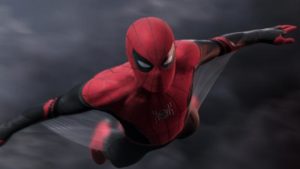 Younger siblings are now older, while some characters have remained the same. Most of Spider-Man: Homecoming‘s supporting characters must’ve been dusted, because they reappear here unchanged, including Peter’s best buddy Ned (Jacob Batalon), his nemesis Flash (Tony Revolori), his love interest—moved on from Liz in the last movie, these teens are so fickle—MJ (Zendaya, terrific), Peter’s aunt May (Marisa Tomei), his bumbling teacher Mr Harrington (Martin Starr), and Peter’s last real connection to Stark, Happy Hogan (Jon Favreau), who’s a little kinder to Peter than the last time. Angourie Rice charms with more screen time as Betty Brant, and Remi Hii joins the cast as Brad Davis, a classmate who also has eyes for MJ. 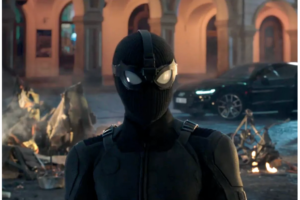 Naturally, Peter doesn’t get that vacation: Nick Fury (Samuel L. Jackson) and Maria Hill (Cobie Smulders) are dealing with the emergence of elemental monsters—and some of the worst CGI we’ve seen in a Marvel movie—along with a lone superhero fighting them off, Mysterio aka Quentin Beck (Jake Gyllenhaal, just OK here). Of course, not all is as it seems, and one of the real pleasures of the film is Beck’s backstory and how it all ties back to the darker legacy of Tony Stark’s ego.

The predominant tone is more relentlessly wholesome/awkward teen comedy than even the last time out, which is OK,  for the most part—it’s preferable any day over a gross-out teen superhero comedy, which we hopefully won’t ever see. It references many of the events of Avengers: Endgame but in what amounts to an almost meta commentary on the darker events of that picture, while still offering a mid-movie mind-bending hall-of-mirrors sequence that feels like it’s right out of the comics. 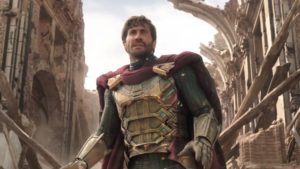 I found myself chuckling at a lot of this as Spider-Man: Far From Home keeps the surprising plot elements, the excellent use of picture-postcard European locations, and character-driven humour at the forefront. The heart of the thing is whether Peter Parker will find the courage to admit to MJ his real feelings, which is something of a hoot while he risks his life against threats mystical and otherwise, that teen romance is the thing that scares him the most.

It’s also a good 25 minutes too long, something I’ve rarely felt when sitting through Marvel movies, which are usually more gingerly paced. To put it simply, a little too much event is crammed in where some judicious cutting could have pared this down to a zippier hour-and-45, rather than a somewhat lugubrious two-10. That said, while the CGI I mentioned earlier is atrocious, a final battle involving drones is an improvement on what goes before, and the first inter-credit and post-credit scenes are real gems—don’t miss them. 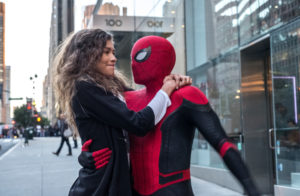 Overall, what you get is a playfully entertaining popcorn picture, a teen comedy with added superheroics, and, count-em, four Spider-Man costumes. They’re gonna sell a lot of action figures.