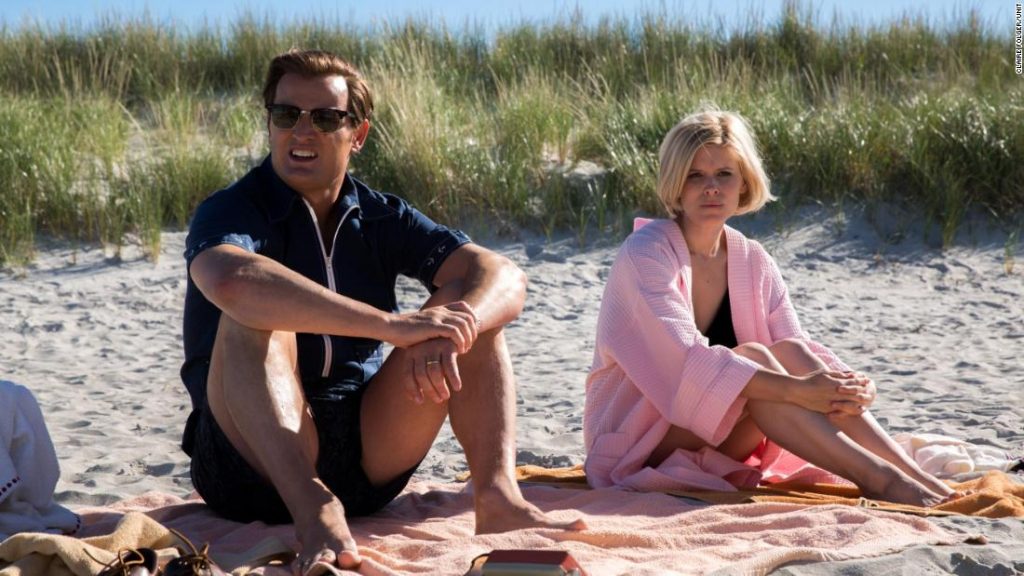 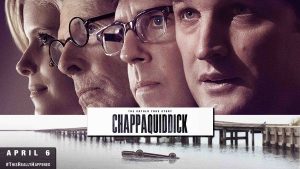 This must be the final piece of the Kennedy legend to find its way to the big screen. If they’ve finally arrived at the Ted Kennedy story, the scandal of his having driven drunk leading to the death of a young woman, the mistake that followed him around his entire political career, then this must be the end of it. It’s not that I don’t get the appeal. The Kennedy’s Camelot provides Shakespearean levels of human drama, but it’s been mined so often by Hollywood if there’s to be a natural stopping point, I hope this is it. Let all the American Boomers know, their icons are presented, considered, sanctified, and humanized. Can we all go home now?

Curran is a director with talent—witness The Painted Veil and Tracks—and he makes some interesting choices here to get to grips with the Senator (as played by Jason Clarke), while also framing him as an overgrown child, someone who never shone like his brothers did. He lived in their shadow, but he withered under the pressure of public expectations, and those of his father, Joe (here played by a never-more-grizzled Bruce Dern).

The first act is all about the car going into the water, the hours before and after that inciting incident. Curran casts well; Kate Mara as the doomed Mary Jo Kopechne, Ed Helms as Kennedy cousin and fixer, Joseph Gargan, Jim Gaffigan as Massachusetts attorney Paul Markham, and Olivia Thirlby as political aid Rachel. She’s magnetic—someone give her a star-making role, already. 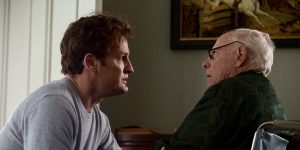 But Curran has all of his characters wandering around in a haze of grief, and this is before anything’s even happened. Ted doesn’t seem all that interested in political power, all he wants to do is comfort all of Bobby Kennedy’s female aids, the so-called Boiler Room Girls, who seem to be still reeling from his death. It’s an interesting dramatic choice, given Robert Kennedy was shot and killed more than a year before the events depicted in this film, but Curran conducts a deep sense of melancholy, where the inevitable slo-mo tragedy of Kopechne’s death almost feels like it’s predestined.

The second half of the film is largely devoted to Ted and his group of Democratic influencers—”The Boys,” including Clancy Brown as an especially broad-shouldered Robert McNamara—efforts at damage control, all against the backdrop of America’s competing interest in the moon landing. Here’s where the film almost tips into farce, including a ridiculous scene where Ted and his cousin Joseph wrestle over Ted’s choice to wear a neck brace to Kopechne’s funeral. 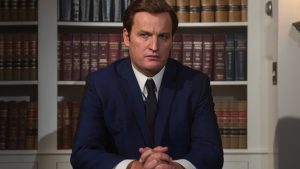 Better films than this one have been rent asunder by these tectonic shifts in tone—a deep sadness followed by weird, dark humour and moments of almost pure camp—and so Chappaquiddick is finally dashed on the rocks of this narrative instability.  It still manages to hold the interest, mostly due to nuance in the performances . Clarke is particularly good, playing Kennedy as a man willing to sacrifice integrity for political opportunity. 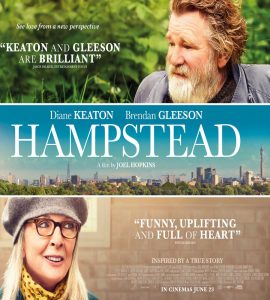 You cast Diane Keaton and Brendan Gleeson together in a feature film, there’s going to be something worth seeing. And I can appreciate the growing genre of senior citizen romcoms, even while there’s not many that have shone—quite the opposite. Here we have the American and Irish stars canoodling in the posh London suburb of Hampstead under the guise of a social realist tale, but don’t be fooled. Hampstead is fuzzy to a fault, way more concerned with delivering formula tropes than anything resembling real life.

Keaton is Emily, a widow living in a building in quaint Hampstead, sitting in on condo board meetings (with a board doyenne played by Lesley Manville) and volunteering at a charity shop while struggling with her finances and leaky flat. Gleeson is Donald, loosely based on an actual character who lived for years in a shack somewhere on the Heath. He’s threatened with eviction from evil developers, but Emily takes an interest in his wellbeing, and charity swiftly overlaps with romance. 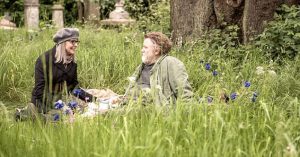 So many missed opportunities here. The new couple explore the British Museum while admiring the Parthenon Marbles (backed by the ubiquitous, irritating score by Stephen Warbeck), which feels like the perfect visual metaphor for a conversation around property and ownership. Nope, doesn’t go there. And then, later, when one party lands a parcel of valuable real estate, there’s never any discussion on the taxes owed—which was my first question. If this was just a mismatched pairing, like Enough Said, I’d probably be more forgiving, but trying to dress this up as a movie with a message leaves you feeling ripped off. It’s unworthy of the leads’ talent, as charming as they might be together. 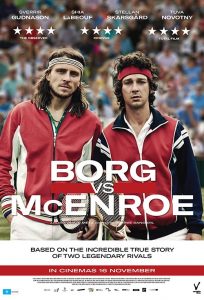 How many good tennis movies are there?  I liked Battle Of The Sexes, I didn’t much like Wimbledon. Does Match Point count? Joining these is Borg vs McEnroe,  telling the true story of the Swedish champion Björn Borg (convincingly impersonated by Severrir Gudnason as an adult, and by Leo Borg, the son of Björn, as a child) who dominated the men’s game in the 1970s until he ran up against the rude, upstart American. John McEnroe (Shia LaBeouf, solid) in the 1980 Wimbledon final.

Whatever the result of the match, the movie is heavily weighted on Borg’s story, flashing back to his childhood as a troubled prodigy. Everyone knows McEnroe was the hothead, picking fights with the refs, but this movie is reporting that Borg as a youngster was just as big a rage-monster. He bottled up his anger because his coach (Stellan Skarsgaard) forced him to. It’s made him neurotic, buckling under the pressure of expectation. 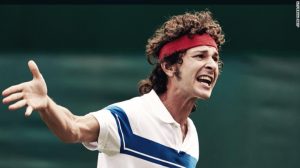 The film’s thesis is that Borg and McEnroe were two sides of the same coin, they just channelled their passions differently. It’s a reasonable gambit, to drill down into their paired psychological landscapes, but it’s executed obviously and without an ounce of joy. You’d think these massively successful players, competing on the biggest stage in the world, were miserable 24 hours a day. Even a fairly convincing visit to Studio 54 in New York feels like it’s a disco drag. The sense of period, especially in the costumes and sets, is right on the money, but the string-filled score is totally overwrought, adding a lot of angst to the proceedings. It doesn’t need extra. It’s also not much of a sports movie, with only a fraction of the time actually on the court. The final match compels, but the rapid-fire editing means the actors’ tennis skills needn’t be too convincing.

What works best are the two capable central performances, but Borg vs McEnroe is unlikely to top any lists of the best tennis movies. We’re still waiting on those.