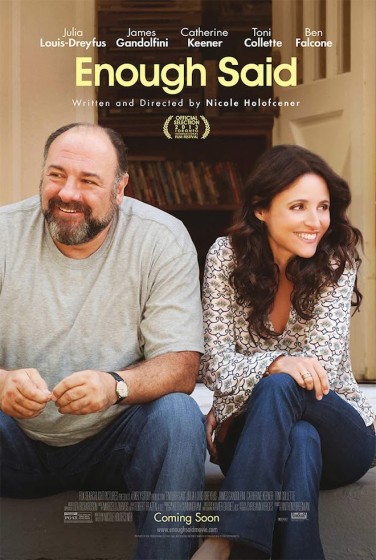 Written and directed by Nicole Holofcener | Disney Plus, Crave Plus and On Demand

Holofcener is the writer-director of a number of awkwardly funny American indie films. To call them comedies, or romantic comedies, is too reductive. They’re independent films, and tend to avoid easy catagorization, but centre on urban relationships, about women and men and their friendships and love affairs, with lives complicated by children and money. I haven’t always loved Holofcener’s work, but do admire her as a singular filmmaking voice, especially as one of the few female writer/directors in Hollywood working regularly. She certainly delivers a consistent level of quality every time out of the gate.

This is going to sound lame and nit-picky, but what I struggle with are her movie titles: Walking and Talking, Lovely & Amazing, Friends With Money, Please Give and Enough Said. I find these generic and boring names for movies, and can never remember them.

Though Enough Said has been screening in only one theatre way out in the ‘burbs of my town — a final indignity from the local Empire Theatres, which has sold its soul and theatres to Canadian national chain Cineplex and hands them over this week — I made the effort to head out there this weekend, not wanting to miss this very well-reviewed feature. And I’m glad I did — it’s a total charmer, and I’d say it’s Holofcener’s best so far.

Eva (Julia Louis-Dreyfus) is a 40-something divorcee with a teen daughter, Ellen (Tracey Fairaway), just about to leave the nest. Eva makes a living as a massage therapist in LA — everyone calls her a “masseuse,” which seems really dated to me, but that must be the term they still use in the States. At a party she’s introduced to Marianne (Catherine Keener, who has been in every one of Holofcener’s films), a potential new client. Marianne makes her living as a poet, and she and Eva really hit it off. Eva’s also introduced to Albert (James Gandolfini), also a divorcee and also the father of a teenager Ellen’s age, Tess (Eve Hewson). Albert and Eva go on a date, and despite Eva being a little cautious — she apparently hasn’t dated much since her marriage ended 10 years before, and Albert isn’t her usual physical type — she has a nice time.

It isn’t long before the plot complication kicks in, and it’s one right out of a situation comedy: As Marianne and Eva become friendly beyond their professional relationship, Marianne opens up about her ex-husband and all his annoying habits. It doesn’t take Eva long to figure out Marianne’s ex is Albert, the new guy Eva is dating. 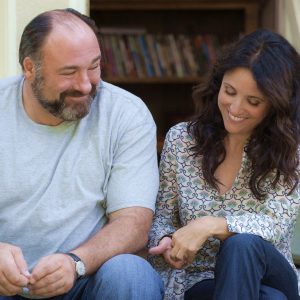 Eva tells her good friend Sarah (Toni Collette, rocking her authentic Aussie accent for a change) all about this conundrum — she likes the new fella but she also likes her new friend and is afraid to come clean with either of them. Interestingly, Eva’s open about this with her daughter Ellen as well as Ellen’s teenage friend Chloe (Tavi Gevenson), who is remarkably frank with her own private life.

This light, affecting film is really a collection of moments, perfectly modulated little scenes of characters acting and reacting authentically. Everyone in the cast, even in the smaller roles resonates—for instance, Ben Falcone, as Sarah’s husband Will, has a few good moments amidst their bickering. This is a story about midlife romance, sure, but its themes go deeper than just that: how we deal with our kids growing up — how to communicate with them, especially — how we manage relationships with former partners and their new partners. Self-awareness is a big issue here, and it doesn’t matter what age you are, there’s always more to learn on that front.

Which brings me back to the plot contrivance. I think Louis-Dreyfus is slightly damned by association: she’s not known for her film work, really, she’s known for her part of that generation-defining sitcom Seinfeld. And it’s hard not to think about that while seeing her, an otherwise intelligent woman, totally paint herself into a corner by something that feels like a construct of the plot rather than necessarily a character-driven element. It’s painful and, yeah, kind of annoying in its predictability. Do you think Eva is going to fix the problem herself by being honest with either party or get caught in her lie of omission at the most awkward and damaging moment possible?

But here’s the thing: Enough Said otherwise earns a lot of license for being right on the money — I was willing to go along with it. This is that very rare thing: an adult romance, where the underlying comedy comes from the characters rather than gags — it rings true at almost every warm, well-observed moment. So, OK, the film offers a fairly artificial plot function baked in, but given all the other good stuff, it’s forgivable.

And if you can divorce Louis-Dreyfus from those associations I mentioned before, there’s so much to enjoy in her work. She and Gandolfini are right in the middle of this thing, and they have a have wonderful frisson together. And his presence, rich and lovely, helps work against the predictability, because it’s so far from what most of us know him for: Tony Soprano. As if we didn’t miss him enough, here in his final lead role he gives us another impeccable, against-type performance.