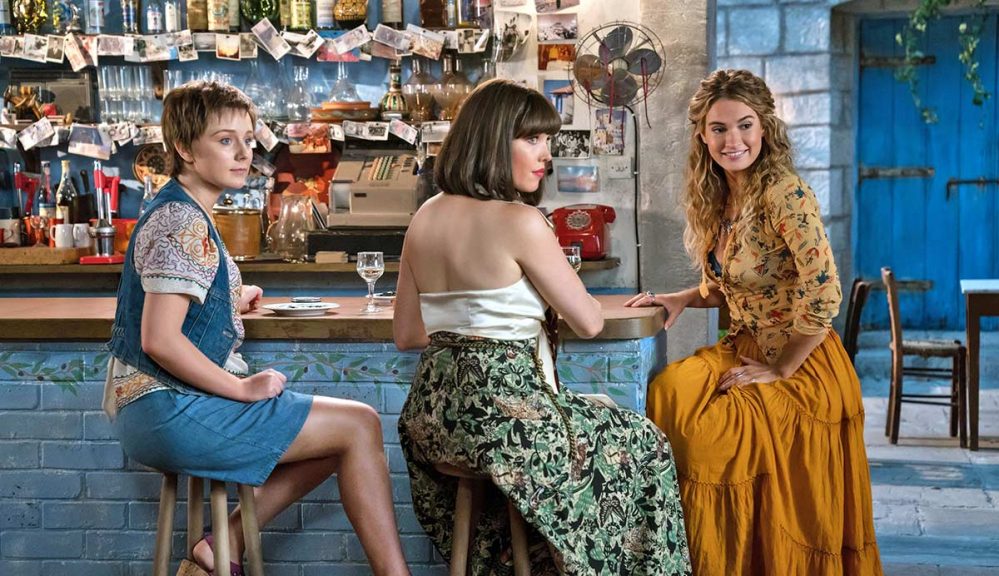 Directed by Ol Parker | Written by Parker, Richard Curtis, and Catherine Johnson, based on the musical by Johnson | 114 min | Netflix 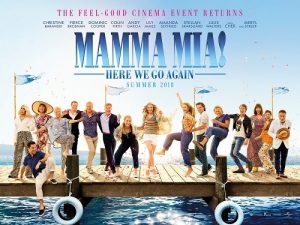 I know I saw the first Mamma Mia! from 10 years ago, but I don’t remember much beyond Meryl Streep having a blast. I recall the on-location cinematography clashing badly with the stagey sets, and that a few members of the cast made mincemeat of the classic Abba songs.

And a dive into my vault uncovered these notes from my former weekly radio hour, The Love & Hate Movie Show, on CKDU:

This is exactly the kind of movie that drives audiences to label critics as whiny, stuffy, and out of touch, because you can bet many will deride this adaptation of the massively popular ABBA stage musical. Guys like me will write that the story of a young woman (Amanda Seyfried, the murdered teen from the first season of Veronica Mars) trying to discover who is her father amongst three men (Stellan Skarsgaard, Pierce Brosnan, Colin Firth) her mother (Meryl Streep) bedded back in the day is a pretty thin premise to connect karaoke renditions of dozens of ‘70s pop/disco classics. We’ll likely grouse about the chaotic pace, the jarring transitions between its Greek locations and poorly lit studio sets, and a few of the marquee stars mangling the songs.

But if we do, we’ll be ignoring a lively, inter-generational, inclusive romp, crammed with tunes people adore—even the lesser known gems, such as the melancholy “Slipping Through My Fingers,” originally on ABBA’s brilliant swan song LP, The Visitors. And it would be criminal to not appreciate La Streep, who has an absolute ball on screen.

I’m not going to do any of that. I really enjoyed Mamma Mia!, despite its problems. I concede to the campy, good time. Like the song goes: “At Waterloo, Napoleon did surrender, and I have met my destiny in quite a similar way.” 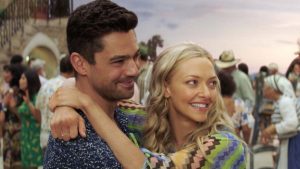 There you go. I found Mamma Mia! Here We Go Again a little harder to warm up to, especially in the first act.

Here the narrative is split into two time periods. We have a series of frequent flashbacks to 1979 when the younger version of Meryl Streep’s Donna—played by the fine-voiced-and-vivacious-but-otherwise-not-very-Streep-like Lily James—finds her way to this remote Greek island and on the way beds the three men (Jeremy Irvine, Josh Dylan, and Hugh Skinner, who will one day become Pierce Brosnan, Stellan Skarsgaard, and Colin Firth). These visits to the past are entertaining enough, but feel superfluous since we all know how this story turns out from the last movie.

The less dramatic present day stuff—Amanda Seyfried’s character, Sophie, abandoned by her man, Dominic Cooper, attempts to fulfill her mother’s dream of opening a hotel on the island—suffers for low stakes and the deeply missed Streep, whose character has died in between the films. Fortunately, Steep’s best pals, Christine Baranski and Julie Walters, are present and accounted for—I’d watch a spinoff featuring just their island adventures. Even their younger versions (a well-cast Jessica Keenan Wynn and Alexa Davies) in the flashbacks help liven things up. 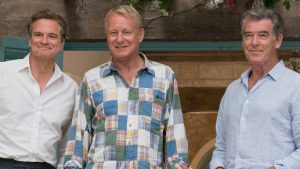 Here’s the thing: The movie improves greatly as it goes along, and even when inherent silliness and the occasional so-so voice threatens to capsize the ship, there’s always another great song around the corner.

The third-act numbers are worth waiting for, especially when Cher finally shows up, playing Streep’s mother (despite being more or less the same age, as anyone who saw Silkwood will recall). Her husky voice is well suited for the couple of ABBA songs she tackles, including “Fernando,” where she duets with Andy Garcia. A scene at a christening elevates the material with a touch of real emotion and the return of a familiar face.

Given the queer culture crossover potential, it’s all a little boringly staid and apolitical. There’s an opportunity missed when Donna chooses to have sex with three different men inside of a week and never breaks into the classic, “Gimme, gimme, gimme a man after midnight,” or, faced with the costs of starting a hotel, Sophie resolutely doesn’t complain about “Money, Money, Money.” The picture also firmly believes motherhood is the best and brightest thing a young woman can do with her life.

Despite this, Mamma Mia! Here We Go Again still has a lot of fun in the sun getting where it’s going. It’s a long way from the worst thing happening at the movies this summer.