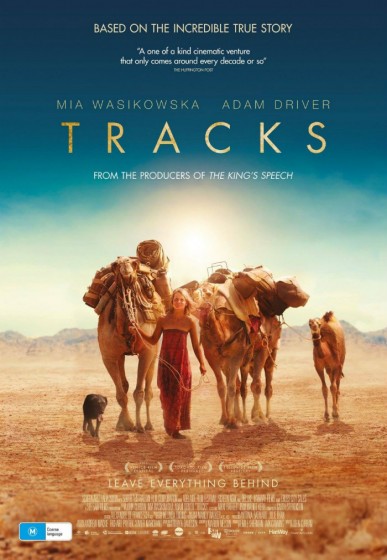 Directed by John Curran, written by Marion Nelson from a book by Robyn Davidson

Tracks is one of the summer’s gems, and easily one of the best movies so far this year. I saw it last year at the Atlantic Film Festival, and am happy to see it a second time.

It’s based on the true story of an inveterate wanderer: Australian Robyn Davidson, who in the mid-70s walked from Alice Springs in central Australia to the western coast, some 1700 unforgiving miles of sand and scrub, in the company of four camels and a black lab. She wrote about it for National Geographic and eventually expanded the article as a book by the same name as the film. The picture comes from director John Curran (The Painted Veil), and it’s a triumph in everything it’s trying to do.

Casting Mia Wasikowska, one of the most self-possessed young actors around, as Davidson, is part of the masterstroke. Her Robyn, we swiftly learn, is someone who takes pride in being able to do things on her own, to not need people. At no time to you ever doubt her spirited self-belief, even as her life is in serious danger out there in the relentless heat, even as she herself starts to wonder why she’s doing it. And though many of the people who care about her—and even those who don’t—consider her trek to be an act of insanity, it attains a kind of epic quality, a representation of the human need to do the creative and the extraordinary, to push the envelope. In that regard Tracks reminds me a little of The Right Stuff. It also works as an ode to self-sufficiency and the pleasures of solitude in emptiness, in the expanse of nature. And so, in different ways, it also made me think of both Lawrence of Arabia and the documentary Man on Wire.

Offering stellar support as a Nat’l Geographic photographer is Adam Driver. Having appeared in three season of HBO’s Girls and Inside Llewyn Davis, not to mention his being cast a villain in the upcoming Star Wars Episode VII, the guy’s getting a lot of work at the moment.

Wasikowska deserves an Oscar nod for this role. She probably won’t get it; this is an Australian movie opening in June. That’s a real shame.  I hope it catches fire with audiences. The film’s worth it.