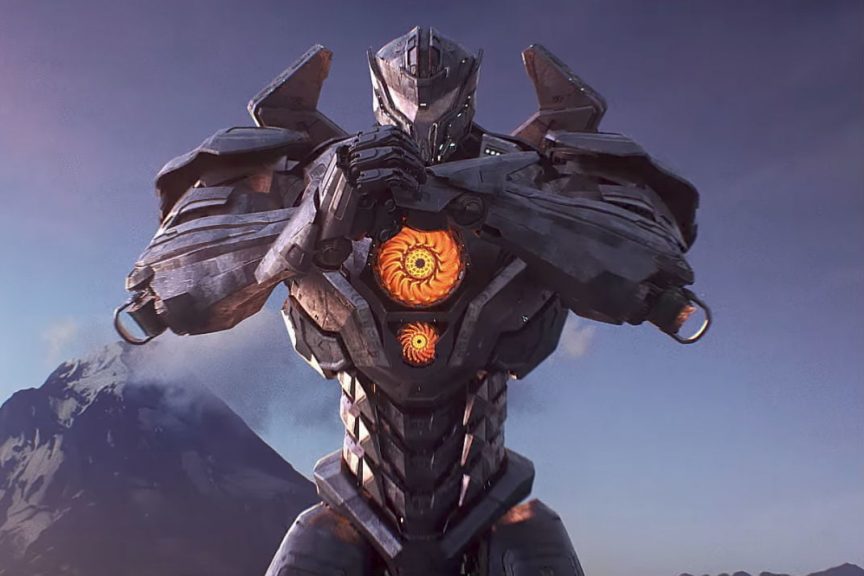 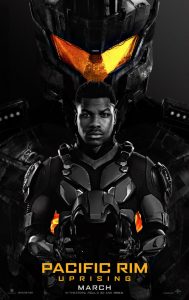 Guillermo Del Toro’s 2013  monsters-fighting-giant-robots movie was a delight, one that just managed to reach the magic worldwide box office take to trigger a sequel. Del Toro is only here as producer and consultant, but his sure hand as director is deeply missed in this return. While it delivers much of the large-scale, ridiculous battle action of the first—between of Jaegers (robots) and other Jaegers, and Kaiju (monsters)—it’s painfully lacking the warmth, character, and internal logic of the original film. 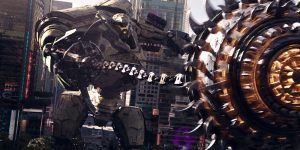 Stacker Pentecost (Idris Elba) is dead, but the spirit of the larger-than-life war hero still haunts the life of his son, Jake (John Boyega), who’s making a living scrounging the wreckage left behind by the Jaeger/Kaiju battles of the previous decade. When Jake crosses paths with Amara (Cailee Spaeny), a teen who builds her own small-scale Jaeger out of scrap, they’re both scooped up and recruited by the forces still training the pilots of those giant robots, just in case the inter-dimensional monsters should ever return. A corporate entity called Shao, run by Tian Jing, has plans to bring remote operated drone robots into the potential battlefield, with the help of Charlie Day’s Dr Newt, while Burn Gorman’s Dr Gottlieb is struggling with tech that’ll help get the Jaeger’s airborne. 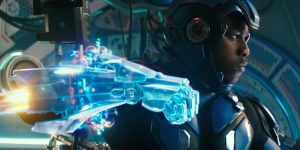 Also present as a pilot is the good-looking but painfully bland Scott Eastwood, who squints like his dad but lacks both his menace and star power. Rinko Kikuchi makes a welcome return from the first film, but there’s no sign of Ron Perlman or Charlie Hunnam, nor any an explanation for their absence. It’s not like I’m a huge Hunnam fan, but he was the centre of the first picture—it would be helpful to know where he ended up.

There’s also a small crew of teenage trainee pilots for Amara to scrap/bond with, but none of them manage to offer much personality. Some of that has to do with the script, and maybe with the dearth of acting experience.

The real problem here has more to do with the fact the movie ceases to care about any of the character arcs about halfway in. But maybe that’s fine: this is, after all, a movie about robots fighting monsters. But the abandonment of anything even approaching human stakes for the final act makes it feel like a special effects reel, crossing over into that awful Michael Bay-Transformers space. 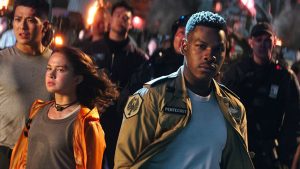 While Pacific Rim: Uprising also includes a couple of reasonably impressive plot twists, as it’s twisting, there’s a genuine lack of consideration for logic. This is a film that has opportunities to make some kind of sense, but turns away every chance it gets. A character has secret information that leads our heroes to discover an abandoned Jaeger base. Why she had this knowledge or what she planned to do with it is never explained. A character set up to be a villain early on turns out to have a lot heroic intent, but in the final moments disappears from the story. One of my cinepanions wondered aloud upon leaving the cinema if there is a different cut of the movie for the Chinese market, offering more detail for a key Chinese character who seems entirely underserved and under-explained. I wouldn’t be surprised.

It’s interesting how this sequel does something that Star Wars: The Last Jedi did too:  It brings back beloved characters from the previous films, but refuses to have them team up, despite the obvious chemistry and likely audience interest. Here Day and Gorman, who were in some ways the misfit heart of the first film, only share a scene or two together. Their connection could’ve played a much bigger role in getting us to care about the way this picture plays out. 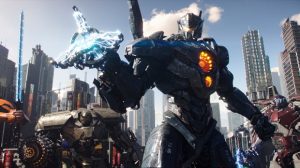 The monster and robot action should please anyone who’s ever dreamed of seeing Tokyo or Sydney destroyed, or didn’t get enough of that kind of thing in Godzilla pictures, but otherwise too much of Pacific Rim: Uprising feels like it needs a tune-up.