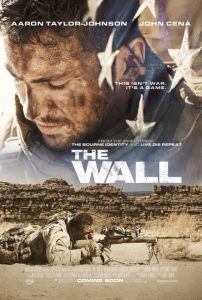 Joining the ranks of the Iraq War movie genre—largely unloved but for The Hurt Locker and American Sniper— comes The Wall, a much smaller picture from director/producer Liman, whose specialty tends to the massive blockbusters The Bourne Identity, Mr & Mrs Smith, and Edge of Tomorrow. Here he tells a story that could easily fit into a 15-minute short, but it’s stretched to a concise feature length, one that still manages to feel like a slog in places.

It’s 2007: US Army recon team Sergeant Isaac (Aaron Taylor-Johnson) and Staff Sergeant Matthews (John Cena) are looking into a killing in the Iraqi desert, a group of pipeline contractors shot where they stood. After waiting for the better part of the day for something to happen, they go in for a closer look and encounter an expert sniper, Juba (Laith Nakli). From then on it’s a game of cat and mouse, with the Americans trying to figure out where the sniper is and how to take him down, while Sergeant Isaac—also gifted with a rifle and known by the telling nickname, “Eyes”—comes to terms with guilt he’s carrying around. 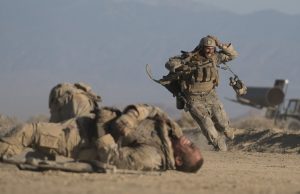 There’s something to be admired in The Wall‘s simplicity, and Taylor-Johnson is typically solid in his role, while Liman’s experience with much bigger action dramas elevates the material, bringing a sense of realism to the technical side of the film.

But when every beat of the script feels overly familiar—with the exception of a twist in the final 30 seconds—and the picture not making any effort to deliver on a thematic level, I found myself mostly disengaged. While watching I was reminded a little of another recent, sparse war drama, Kilo Two Bravo—I wasn’t crazy about it either, but it managed to deliver a genuine slice of suspense, whereas here there’s just not quite enough going on.

Instead, maybe go see a more complex war picture, like Enemy At The Gates, Redacted, or the  recent Danish picture, A War.