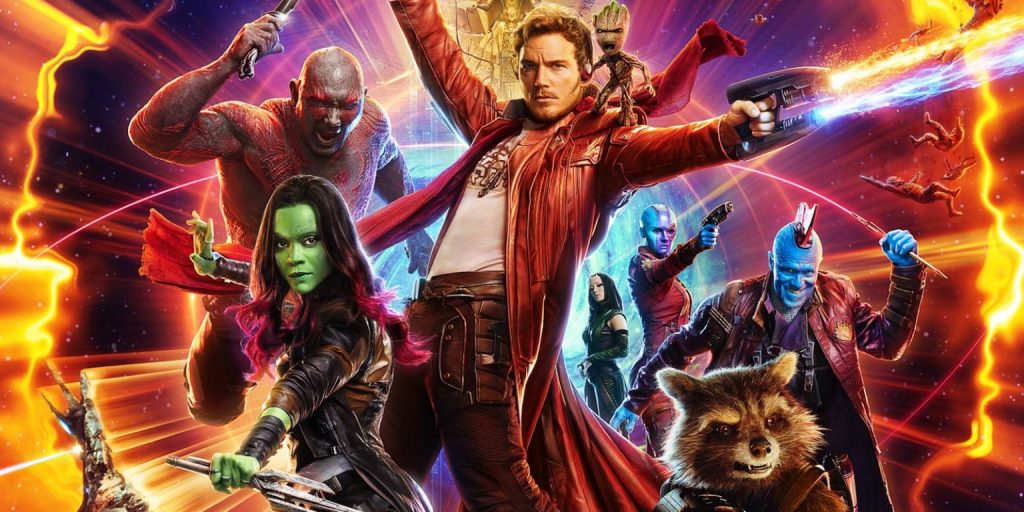 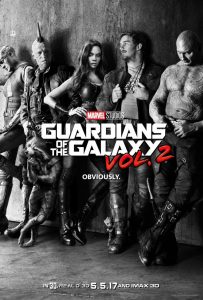 Yup, the newest Marvel movie is a sequel to that surprise megahit of August 2014, Guardians of the Galaxy, which at the time seemed like a huge gamble for the studio. Adapting an obscure comic about a group of space-freebooters gave Marvel a foothold in fantasy/science fiction beyond their collection of earth-bound superheroes. People loved it, and there was a lot to love. Guardians of the Galaxy Vol. 2 is more of the same mix of adventure, space-battles, weird aliens, and humour that put bums in seats in the first place. 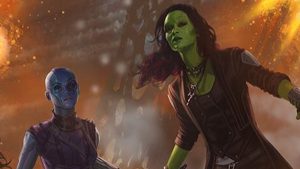 One of the dangling loose ends in the first film was the identity of the father of earthling Peter Quill aka Star Lord (Chris Pratt). And, go figure, this time he shows up in the jovial form of Kurt Russell, who they de-age in an early flashback and it’s the single best example of that technique I’ve seen so far. He practically shines, with hair worthy of a Head & Shoulders ad. His character is called Ego, which should be a bit of a warning sign, really. Fans of the comic will remember the character and appreciate all the Easter Eggs… like another appearance by Howard The Duck… but like the first film you don’t need to have been a comic reader to appreciate the picture. 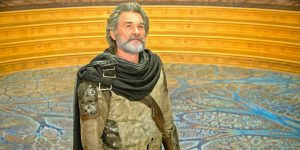 The Guardians now have an interstellar rep—which allows them to find work, like a job battling a giant space slug looking to eat space batteries in the care of the Sovereigns, a priggish, austere, easily offended alien race led by Ayesha (the excellent Elizabeth Debicki). (Why these folks would need the Guardians’ help when they have a remotely piloted fleet of armed spaceships is not explained, but just go with it.) When Rocket (the obnoxious raccoon voiced by Bradley Cooper) steals some of these batteries, the aliens use those remotes (operated on consoles with ’80s video game sounds, a nice touch) to chase our heroes right to Ego, who wants to reconnect with his son. Meanwhile, Yondu (Michael Rooker), the blue-skinned pirate who abducted Peter when he was a kid, is on the outs with the Reavers, his interstellar gang—led by Sylvester Stallone! In a weird way, Yondu’s arc is the broadest, answering a lot of character questions set up in the first film.

Otherwise we’re once again in the company Quill—who, sidelined with his daddy issues doesn’t carry so much of the movie this time out, which is great since Pratt hasn’t nearly the charisma everyone in Hollywood thinks he has—Rocket, Gamora (Zoe Saldana), the mega-adorable Baby Groot (voiced by Vin Diesel), and Drax the Destroyer (Dave Bautista), who this time is the film’s MVP, the funniest of the bunch with his utter tactlessness. Oh, and Nebula (Karen Gillan), Gamora’s vindictive cyborg sister and Mantis (Pom Klementieff), Ego’s underling. The staples of the first film—the heroes’ constant fighting to hide underlying insecurity around wanting to belong, wanting to be loved—is also very much what this one is about, along with those afore-mentioned space battles, weird aliens, etc., all soundtracked to a goofy selection of barely remembered AM radio hits of the ’70s… and Fleetwood Mac’s majestic “The Chain.” 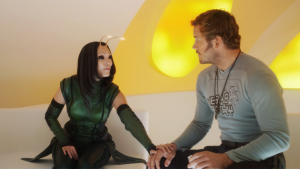 It’s a terrific formula. While the “we’re family” tropes are as tiresomely heavy-handed as they come (this side of Fate Of The Furious) and the final, terminally dull CGI galactic battle that concludes this and most of these Marvel pictures wore out its welcome half-a-dozen movies ago, what Guardians gets right is an emphasis on the fun—and cramming in as many in-jokes and peculiar asides as can fit into an almost two-hour-20-minute space opera. Also, look for a couple of delightfully cheesy nods in the action and production design to Mike Hodges’ Flash Gordon, and a cameo from Howard The Duck, who deserves his own movie (again). 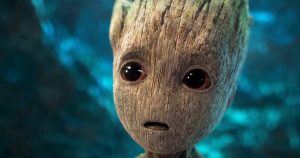 Prioritizing character-based humour throughout is what lifts Guardians of the Galaxy Vol. 2 into the pantheon of solid summer popcorn movies. You’d think this kind of thing would be an obvious approach, but apparently not as it’s still such a charming novelty when Hollywood manages to get it right.