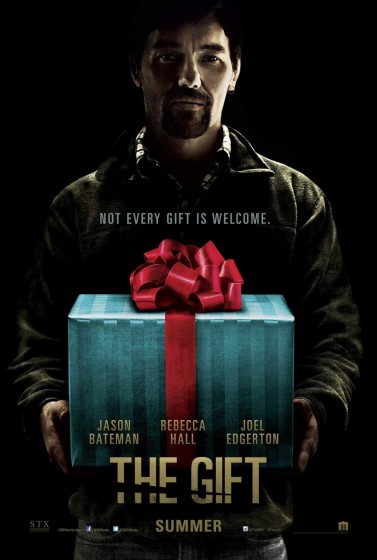 Written and directed by Joel Edgerton

One might say the domestic thriller has gone out of fashion since its 1990s heyday, but that’s not entirely true. There was the Idris Elba/Taraji P. Henson picture No Good Deed, and the Jennifer Lopez drama The Boy Next Door. Halle Berry has made a couple, too. They’re often morality tales, and usually feature a woman threatened by some man in her life.

That much is true of The Gift—and we’re not talking the Sam Raimi thriller with Cate Blanchett and Keanu Reeves—though this new drama with the same title is impressively wound. It’s a slick and largely entertaining achievement, especially as a first feature, by Australian actor Edgerton (Exodus: Gods And Kings, The Great Gatsby), even though disappointingly retrograde in its gender politics. Simon (Jason Bateman) and Robyn (Rebecca Hall) are a young-ish couple newly arrived in Los Angeles with their dog, happy to move into a Hollywood Hills mid-century modern. He’s got a fancy new sales job, she’s a little fragile, trying to leave behind a prescription drugs addiction and a miscarriage. They run into Gordo (Edgerton), a former high school classmate of Simon’s. He’s a little awkward, but well-meaning, dropping off gifts and ingratiating himself into their lives, to mostly Simon’s chagrin. After a couple of dinners, they shake him off when they learn a few unpleasant truths, which allows Wendell “Bunk from The Wire” Pierce a one-scene cameo, again as a cop.

But Robyn feels some remorse about the way she and her husband treated Gordo, and starts to figure Simon is hiding something, so does a little digging herself. What she discovers reframes the entire situation, and allows her a fresh insight into Simon’s days as the BMOC.  According to The Gift, we are who were in high school, and always will be. That’s a depressing thought. Bateman and Hall are terrifically cast in this. His natural likability and the comic gifts that made him famous help keep Simon a sympathetic figure long past the point where he should be. His arc is a study of weakness, and he’s totally convincing. Hall is effortlessly emotive. I’ve liked her since Vicky Christina Barcelona, and she’s never less than compelling here.

Edgerton may have made a mistake casting himself as the potentially threatening Gordo. I didn’t quite buy him as the anxious and awkward sort, though he does have a bit of a creepy glare.

The audience I saw the movie with fell for all the first act jump-and-scare moments, and seemed to enjoy them. The story moves gingerly from those typical genre traits—it’s really a thriller that overlaps into horror—while undercutting it with a more complex dramatic weight, the possibility that Simon’s secrets may be more of a threat to Robyn than Gordo, and the emotional realities of intimate betrayal. But even as Robyn’s takes some agency late in the running, she’s really just a tool in a narrative about the men. She’s the heart of a story that would rather make her a victim rather than its eventual hero. So, while Hall is terrific, and the construction of the movie is impressive, it left a bad taste in my mouth.