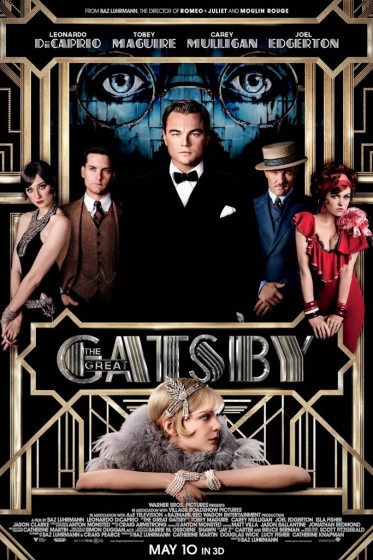 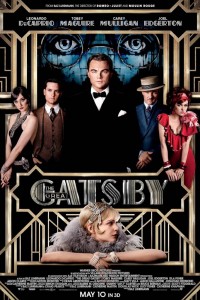 The one thing I liked about Moulin Rouge, Luhrmann’s last hit feature more than 10 years ago, was how he created this grand period spectacle laced with contemporary music. It was fun identifying the songs being performed by Nicole Kidman and Ewan McGregor. Otherwise I found the drama obvious and the tale a bit of a slog. For me, great sets, gorgeous costumes and swooping cameras just aren’t enough.

But I thought maybe, paired with a classic piece of American lit, Luhrmann might be able to deliver something with a bit more soul and substance this time. Unfortunately not. The Great Gatsby is grand, theatrical and eye-poppingly gorgeous to look at, but entirely hollow at its core.

Most people have read the Fitzgerald book, generally required at some stage in high school. It’s a slim, sad tale of American hubris and tragedy. What criticism there was of the excesses of the Roaring ’20s in the book the film pretty much tosses for celebratory opulence, especially in the first act. There’s still plenty of sadness in the story, but what could have been truly devastating is rendered kind of rote.

For those for whom high school was awhile back, here’s a primer: the character of Nick Carraway (Tobey Maguire) is an alcoholic writer recalling those heady days in the moneyed communities on Long Island, where the New York rich and nouveau rich rubbed elbows, everyone from corporate fat cats to gangsters to politicians to movie stars. He was living in a cottage beside the sprawling estate belonging to the mysterious Jay Gatsby (Leonardo DiCaprio, as pretty as he’s ever been). Carraway has family in the area, a cousin, Daisy (Carey Mulligan), a self-absorbed, unhappy and anxious woman married to a former polo player, the obnoxious, violent Tom Buchanan (Joel Edgerton). Tom is having an affair with a married woman, Myrtle (Isla Fisher), who hates her grease monkey husband, George (Jason Clarke). Also on the scene is Jordan (Elizabeth Debicki), a golfer with whom Nick has a flirtation.

Gatsby invites Nick to one of his parties for a particular reason: Gatsby and Daisy have a history and he would like to renew their acquaintance.

All of this intrigue and deceit is set against the bright lights of a dreamlike New York that only ever existed in people’s imagination, the palaces of Long Island and the dirty, industrial road between them. Nothing looks real in this fantasy, manufactured to the gills by CGI. And while I have to applaud Luhrmann and his technicians their ability to create this jaw-dropping environment—I was astonished at how vibrant and glorious their Times Square circa 1922 looked in full-colour 3D—it’s as substantial as meringue. By the end of the first act I was prepared to call The Great Gatsby of 2013 a disaster to rival the 1974 adaptation, which featured Robert Redford, Mia Farrow, Sam Waterston and Bruce Dern acting in front of vaseline-slathered lenses.

But it got better. Maybe because Luhrmann’s unerring ability to marry music and image started to beguile me. As he did in Moulin Rouge, he uses modern artists on the soundtrack, and I have to say I really enjoyed the contributions by Florence + The Machine and Lana Del Rey. And after twenty dizzying minutes of aerial cameras, he finally settles into his story and lets his actors do their work.

In DiCaprio, Luhrmann has an ideal Gatsby. I’ve often found DiCaprio a little flat, maybe because being such a gifted child actor I have trouble believing him in adult roles. Or it just could be he never quite lost his boyishness. But after his great turn in Tarantino’s Django Unchained and now here, it really feels like he’s hitting his stride. He’s able to find the right kind of emotional blinkers for Gatsby. At times I was even reminded of a young Jack Nicholson (who would have made a stellar Gatsby) though mostly because of the eyebrows.

Maguire, however, is a bit less convincing. I never quite believed him as the tortured writer, though he and his buddy DiCaprio have a couple of solid, bromantic scenes together.

The biggest problem I had in the cast is the otherwise charming Carey Mulligan. I’ve liked her in everything she’s been in to date, but here I felt like she was miscast. I think they needed someone who could genuinely inspire obsession in someone like Gatsby, and I don’t think she quite brings it. She needs to be compelling despite her ditziness, and I didn’t think she was. Her ordinariness—and my apologies to Ms Mulligan—makes Gatsby’s outsized passion seem more like insanity; it makes him much less appealing, much loopier. And if you struggle to sympathize with Gatsby, all we’re really connected to is perennial outsider Nick, and he’s barely there in this version of the story. The rest of the bunch, especially Edgerton’s Tom, are cads. (On an incidental note, Edgerton is weirdly starting to look like Conan O’Brien.)

Luhrmann’s film is a grand experience for the eyes, that I can’t deny. But unlike Terrence Malick’s visual grace notes in To The Wonder, which I also saw this week, nothing about this film made me contemplate the vagaries of life and love. If anything, it made me feel as though I’d eaten too much cake.