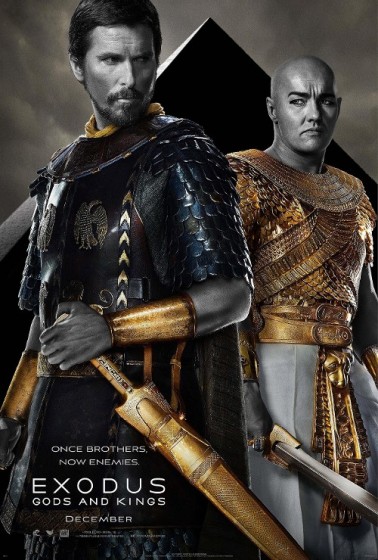 When I saw Noah earlier this year, I wondered who it was made for. Studio heads must be thinking with the right Biblical story they might have another Passion Of The Christ-level success, getting the devout Christians out to the movies. But Noah was very much a part of Darren Aronofsky’s oeuvre—that is, weird, whacked, and crammed full of rock creatures with Nick Nolte’s voice. I enjoyed its creative liberties, but it didn’t seem very faithful to its text.

This time, Scott—Hollywood’s leading creator of grand spectacles and alien horror—has chosen to make a far more conventional Biblical epic. As with all of Scott’s films, the production design wows, but with Exodus, not much else does.

Unfortunately, this is not Raiders of the Found Ark. (Thanks Stephen Cooke.) If you’re like me and your understanding of the tale of Moses came from early childhood stories and repeated viewings of Cecil B. DeMille’s The 10 Commandments, this take will seem very familiar. We meet Moses (Christian Bale) as an advisor to his cousin, Ramses (Joel Edgerton), the Prince of Egypt under Pharaoh Seti (John Turturro) and Queen Tuya (Sigourney Weaver).

In a reasonably rousing early battle scene where the Egyptians take it to the Hittites, Moses is shown to be a great warrior and general, superior to his albino serpent-loving cousin. But Moses won’t ever trouble the Egyptian throne; he’s adopted. And it isn’t long before his Hebrew slave origins are revealed and he’s cast out into the desert and wanders across the Red Sea at low tide to find a home in a little village.

It occurred to me there might be a solid miniseries in the 1300 BCE Egyptian court intrigue. I enjoyed what was going on in the opening act, the power struggles within the first family, the melodrama of hidden parentage and managing the empire’s money. It’s too bad Turturro and especially Weaver are criminally wasted. I wanted the movie to be all about their marriage and the bad behaviour of their puffy, bald son. The art direction, extras in the (maybe digital) thousands, the amazing costumes and sets—all impress. It gives you something to look in the corners of the frame when the drama slows to a muddy crawl.  Bale—who sounds American at the beginning and a Brit by the end—is typically growly, taciturn, and not terribly sympathetic.

In order that the film doesn’t span 40 years (though its 150 minutes are occasionally felt), much is glossed over. It takes three brief scenes for Moses to meet, woo, and marry his rug-weaving bride, Zipporah (Maria Valverde), and become a shepherd, though the better part of a decade passes.

Then he’s back in Egypt, embracing his heritage and organizing the slaves (including a whiskered Ben Kingsley and an almost entirely silent Aaron Paul) to fight against their oppressors, inspired by God (or a hallucination) in the form of demanding little boy. Given the Christian deity’s Old Testament temperament, that actually makes a lot of sense.

Yes, the various plagues descend and yes, they’re as impressive and horrific as the very best CGI in the land can envisage. One of my favourite moments comes when Ewen Bremner, playing an Egyptian scientist with a suspiciously Scottish accent, does his best to explain to Ramses why a torrent of toads might be a natural occurrence. It doesn’t get him very far but does inject a brief moment of levity. With no Edward G. Robinson in sight, a few laughs are much needed.

But what does all this add up to? Was I convinced by the parting of the Red Sea—again, with the suggestion that such a thing could be a naturally occurring event? Do we really need another version of this well-told story? In a word, no.

Sure, there’s a lot up on the screen to enjoy looking at, the level of glossy-yet-gritty professionalism Scott brings to all his grand historical epics, including Gladiator and Kingdom of Heaven. But the emotional engagement is, at best, lukewarm. With the exception of Bale, most of the cast is just window-dressing. Edgerton, whose work I’ve enjoyed elsewhere, is entirely flat here. He’s neither as insecure, as grandiose, nor as tortured as the role requires. Plus, he sounds Swedish, which is odd since the actor is actually Australian.

It may be that the shadow of Yul Brynner is simply too long to escape.