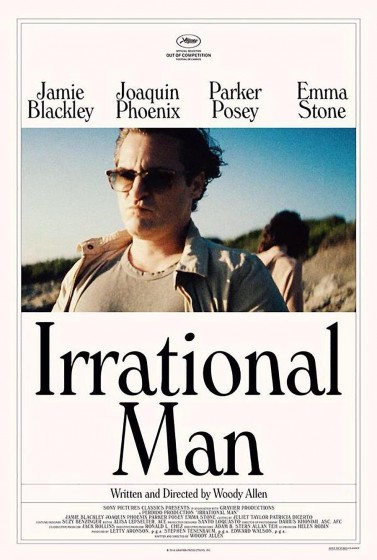 “A tormented philosophy professor finds a will to live when he commits an existential act.” So claims the euphemistic IMDB plot descript-bot.

Others have aligned Irrational Man with one of Allen’s best films, Crimes and Misdemeanors. I wouldn’t go anywhere near that comparison, even if they share the “existential act”, murder.

Where Woody’s 1989 classic is among his best, this time out he’s delivered a late-period middler, the dark vein delivering a lot more weight than last year’s light-hearted-but-ultimately-forgettable Magic In The Moonlight, but suffering from the same hermetic, out-of-touch quality that scuppered some of the previous year’s Blue Jasmine.

I would say that Woody, the great American filmmaker who delivers a new movie annually, needs to get out more. And that’s coming from someone who happily lines up every year to see whatever he’s got on offer. A slovenly Joaquin Phoenix is Abe, the philosophy teacher just arrived at a red-bricked Rhode Island college, though his rep has preceded him. He’s a drinker, a fornicator, and a published philosopher of some renown in academic circles. But his work hasn’t sustained much joy in him. He struggles to find any practical application of all the deep thinking to bring any joy to life.

Despite his alcoholic, anti-social tendencies, he still captures the interest of a married colleague, Rita (Parker Posey), and Jill (Emma Stone, who at 26 really needs to graduate, pun intended, from these student parts), a precocious student with a serious boyfriend. These women orbit around Abe and it’s often tough to see why. Then, one lovely day in a diner at the start of the second act, Abe and Jill overhear a woman talking about how she’s going to lose custody of her kids because of collusion between her husband’s lawyer and the judge in her divorce case . This gives Abe an idea: kill the judge, thereby doing some small amount of good in the world.

It lights a fire under him as he secretly plans out this perfect murder. He’s much happier. Naturally, he gets more involved with Jill as his life finds meaning in doing, rather than dispensing wisdom. This is diverting stuff, very much in line with Woody’s typical search-for-meaning script  inspirations. I liked how he nicely splits audiences sympathies with the murder plot—do we want Abe to succeed? As usual, he’s offered terrific roles for the women in the cast, and, as usual, he’s written a story where at least one of them is smitten by a man who wields power over her, and is, at the same time, a little long in the tooth to be with her.

But, and maybe this is because my will to gripe about these repeated gender tropes in Woody Allen’s movies is being beaten down by their annual repetition, I wasn’t as bothered by it this time out. That may be in part because Phoenix is a whole lot younger than Colin Firth was in Magic as a potential romantic foil for Emma Stone. What bugged me more here, even as I was carried into the plot of Irrational Man, is a nagging feeling that the movie was a period drama, even though it’s supposed to be contemporary.

That’s because Allen has ceased to write characters speaking like they live in this century. As he struggled with the working class characterizations in Blue Jasmine, here he’s filled his cast with characters who are supposed to be in their early 20s, and they may as well have stepped out of the 1960s. Maybe if he’d tried to bring a more playful, more farcical, tone to the proceedings it might have worked better. It’s hard to know.

I’ll give props to the Woodster for his machinations, and there is plenty here for fans of his work to appreciate.  But as Irrational Man reaches a clumsy conclusion, which borrows too much of the dour tone of his dire 2007 crime drama Cassandra’s Dream and any number of 1950s melodramas, I was left wishing for a movie that felt a little less like it was a relic of another time.