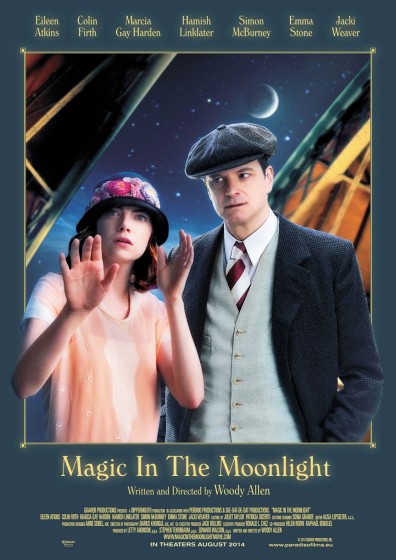 Written and directed by Woody Allen | Amazon Prime and On Demand

While there’s a certain inevitability to a new Woody Allen movie—he’s made one a year since the early 80s, and was pretty quick about putting them out in the years before that, too—going to see one of his pictures and reviewing it in 2014 nearly feels like a political statement, given the scandal that has swirled around the filmmaker this year.  As I’ve said, I wouldn’t blame anyone for excusing themselves from ever seeing one of his movies again, but I’m doing my best not to mistake the films for the filmmaker.

I’m also not going to let my overall affection for his work blind me to the problems in this current release. Allen’s new picture is typically charming, but it’s also so slight it could blow away in a strong breeze.  I’ve noticed a few if his recent features (with the exception of last year’s Blue Jasmine) have been suffused in a kind of nostalgic glow, which clashes with his trademark neurotic wit and some of the more serious themes in his work. Certainly Magic In The Moonlight, which seems to have been built on the blueprint of a romcom, isn’t terribly funny. But it is engaging and lovely to look at, with gorgeous cinematography  by Darius Khondji, who makes sure to shoot every sun-dappled scene for the maximum beauty deliverable by the Cote D’Azur. And it’s filled with winning, beautifully costumed performers with whom it’s fun to spend a little time.

Stanley (Colin Firth) is a massive, self-declared misanthrope. The only thing that makes him at all sympathetic is that he knows it and fully owns his attitude. His day job is a magician, where he dresses up as an Asian illusionist and cuts women in half. (It’s set in 1928, what can I tell you.) Extracurricularly, he debunks psychics, and his magician buddy Howard (Simon McBurney) has found an American woman named Sophie (Emma Stone) visiting the south of France with her mother (Marcia Gay Harden, barely in it) who Howard believes might actually be the real deal. Stanley takes this as a challenge and heads on down there, ostensibly to visit his beloved aunt, Vanessa (Eileen Atkins). The matriarch of the adjacent Catledge family, Grace (Jacki Weaver), is having nightly seances with Sophie in order to communicate with her dead husband.  Stanley starts to spend time with Sophie, distracting her from the attentions of the young, ukelele-strumming man of the house, Brice (Hamish Linklater), who is determined to marry her. It isn’t long before Sophie starts to impress Stanley with her gifts, giving him a much happier worldview with room for a little magical thinking.

And here’s where the movie gets interesting. At its start it’s stagey and stiff—in both the script and performances. I was worried we were in for a Woody in the vein of Scoop or Whatever Works (where very little actually did).

But once Stanley’s confidence in his dogma begins to fracture, I started to enjoy the picture a lot more. The argument of reason and rationalism versus faith, romance, and the invisible threads of the universe is nicely set up. Even as Stanley’s rage against irrational belief systems and chicanery is well-formed and understandable, he’s such a miserable asshole the movie seems to come down solidly on the side of believing in something, even something ridiculous, is better than believing in nothing. And love is, after all, ridiculous.

Stone convinces in her midwestern down-to-earth manner and flapper-y wardrobe, and Firth is convincingly brusque, but somehow manages to stay likeable despite his rigidity. The rest of the cast acquit themselves well, especially Atkins,  who shares a great scene with Firth late in the running.

Did I wish it was funnier, more dramatic, and that Emma Stone got to flex more of her comedic chops? Sure. I just can’t deny the film’s naturally infused good feeling.

And what of that tired trope of Allen casting older men as romantic leads with younger women? Stone is 25. Firth is 53, more than twice her age. Playing Stone’s mother, Harden at 54 is much more appropriate a ladyfriend for Firth, but of course that doesn’t happen.

It sure would be great if Woody would stop doing that.