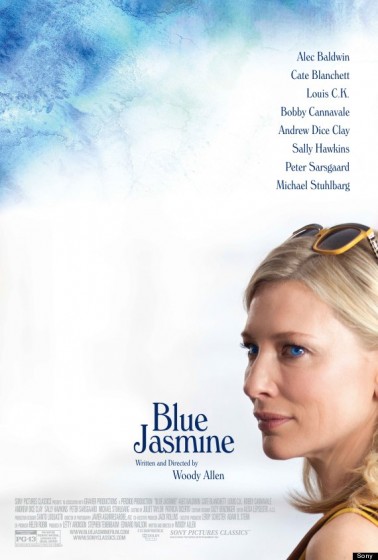 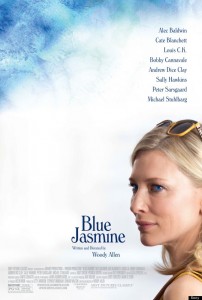 Jasmine is actually Jeanette. Somewhere along the way she changed it, because Jeanette didn’t have the requisite flair. Jasmine married up, to Hal, a New York one-percenter if there ever was one. Except Hal is crook and when he’s arrested, the lawyers take everything. Jasmine, desperate, heads to San Francisco to shack up with her sister, Ginger, who works in a grocery store. Jasmine wants a fresh start, but she’s so completely clueless, so sheltered and neurotic that even as she takes realistic steps to improve her situation, her attitude and self-sabotaging behaviour sends her into a tailspin.

Of the 44 (and a third) feature films Woody Allen has directed, this is the 37th I’ve seen. And though it’s ostensibly a drama, the film has the beats and characterizations of a comedy. That’s to say, it’s lacking depth in a way that we’d forgive if we were laughing all the time.

For example, Ginger (Sally Hawkins) is a bit of a sketch, and her “grease monkey” boyfriends are also sort of caricatures—Andrew Dice Clay, who might be, for the first time in his career, likeable on screen, and Bobby Cannavale, who is quite a bit less likeable.

But Cate Blanchett, as Jasmine, is electric. She’s the best thing in the movie, and if the picture is basically a portrait of a woman coming apart at the seams, it works as that level. Blanchett carries the thing on her lean, tense shoulders, and she brings everyone around her up with the force of her performance.

Maybe it’s not a surprise that the working class characters don’t quite convince. Allen, while being one of the great American directors working, often struggles to accurately represent people outside of his Upper West Side milieu. It’s less of a surprise that the flashbacks to Jasmine’s life on Long Island with Hal (a nicely greasy Alec Baldwin) feel totally on target, and solid supporting work from the reliable Peter Sarsgaard and Louis CK help the rest of the story clip along nicely.

I have to at least give Allan credit for the effort here, creating work that aims for some cultural currency in the midst of the ongoing recession, of which Jasmine is a casualty. His riff on a modern Blanche Dubois doesn’t fail to engage, even if all the parts don’t work.