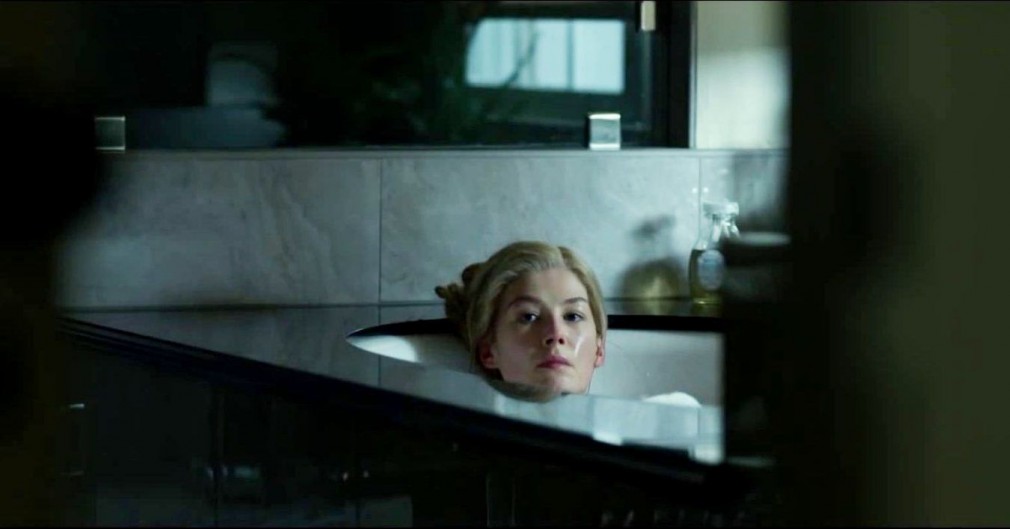 Directed by David Fincher, written by Gillian Flynn, adapting her own novel 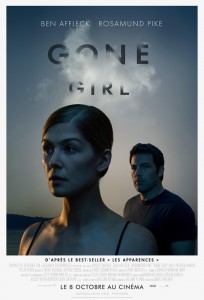 I’ll admit, I got about halfway through the novel. I appreciated the characterizations and the attention to detail, but didn’t find it a compelling page-turner. Given the weeks on the New York Times bestseller list, I’m clearly in the minority.

I could see the material would appeal to Fincher. The director of Zodiac, The Social Network, and the American version of The Girl With The Dragon Tattoo does well with this dark, skin-crawling mystery.

The first act is the powdered-sugar sweet set-up: Nick (Ben Affleck) and Amy (Rosamund Pike) are prominent in the Manhattan media scene, where they meet, fall in love, and buy a spectacular brownstone with her money—she’s a trust fund girl while he’s a smalltown boy from Missouri.

But things go sour—they lose their jobs in the financial meltdown, and the house. The now-struggling couple move back to Missouri where they set up in a McMansion and he opens a bar with his twin sister, Margo (Carrie Coon). He gets belligerent and she grows resentful. 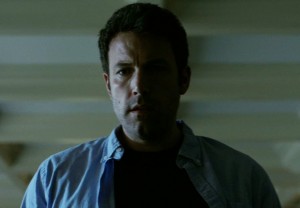 Or, do they? He-said-she-said is the first act structure (with her side of things told through a diary), but it’s pretty clear from the start that both are unreliable narrators—the scripted dialogue of the opening is stiff and stilted, as if they’re remembering it better than it ever could have been. The key question, when Amy disappears and there’s sign of a struggle, is whether he was involved. As the evidence begins to mount, it looks more and more likely.

Beyond this, I won’t go into a lot of detail. But the twists that come thick and fast in the second and third acts are as precisely orchestrated as you’d expect from Fincher, along with the peculiar diffuse grey-green lighting, the amazingly discordant-yet-hypnotic Trent Reznor/Atticus Ross score, the superb construction and editing.

What surprises is the oily humour that begins to pervade. As the plot machinations get progressively more implausible and outrageous, Fincher seems to be daring his audience to believe, all the while serving up an indictment of the American tabloid media establishment—desperate to assign blame, sentence, and execute. And there’s definitely a bit of the quality noir of Double Indemnity and even The Sweet Smell of Success in this film’s DNA. 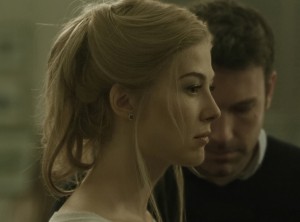 By the time we’re in the homestretch we’ve been witness to some truly terrible behaviour and more than a little gushing gore. Gone Girl is no less than a twisted, cynical and occasionally hilarious opera whose theme is the hideousness of marriage. It might make a great double-feature with Danny DeVito’s War Of The Roses, programmed for anyone going through a bitter divorce.

I liked it. Yeah, I felt like a shower afterwards, but that’s been true about almost every Fincher movie since Seven. Gone Girl should open up some conversation about the way our culture stereotypes both women and men.

The casting is stellar. Affleck, a victim of a certain amount of tabloid media scrutiny in his private life in years past, is ideal as the potentially murderous spouse America finds plenty of reason to hate, and some of his limitations as an actor work in this context, playing a guy whose motivations seem opaque.

Pike, good in pretty much everything I’ve seen her in from Die Another Day through Fracture, Fugitive Pieces, An Education, to last year’s The World’s End, finds a career performance as Amy Elliot-Dunne. It’s a gift of a role, and she’s the one everyone will be talking about from now until February’s little golden men make their appearance. 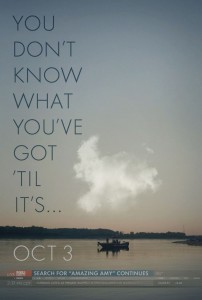 Also serious credit to the support: Coon, who has no film experience previous to this, is wonderful. Tyler Perry is credibly smooth as a Johnny Cochrane-esque lawyer who knows how to work the gutter press, and Kim Dickens and Patrick (Almost Famous) Fugit as officers Boney and Gilpin both shine.