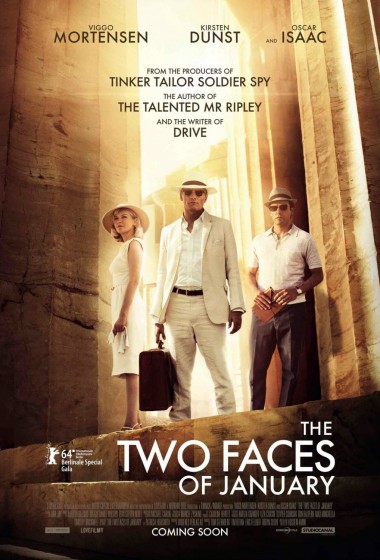 Here’s a film now available on one of the alternative platforms—Netflix, DVD, Blu-Ray, VOD, iTunes, what have you—that didn’t open in local cinemas. I’ll be reviewing these releases and branding them with my NOT IN CINEMAS label to distinguish them from what’s playing on Cineplex screens locally.

Halifax is considered a small market by national film distributors, so a lot of art house movies and quality foreign films won’t ever open in cinemas here. It’s a shame to miss them, so I’ll do my best to let you know about the good ones, and maybe some of the not- so-good ones. For example, Locke was one of the best of 2014 and never made it to theatres. It deserves to be seen.

The Two Faces of January, written and directed by Hossein Amini, adapting the Patricia Highsmith novel

Amini has had a solid career as a screenwriter, adapting quality lit for the screen (Jude and Wings of the Dove) as well as creating some pulpier works, including the screenplay for Nicolas Winding Refn’s stellar Drive. Here he gets his shot as a director, and it’s a bit of a curious choice. I’ve only consumed Patricia Highsmith’s novels through their film adaptations (including Purple Noon, The Talented Mr Ripley, and Ripley’s Game), but it seems to me, based on these movies, she’s an author obsessed with American ex-patriots loitering around the Mediterranean and getting into trouble.

(Another interesting note: Max Minghella, son of the late Anthony Minghella, who directed The Talented Mr Ripley, is listed as a producer on this film.)

Viggo Mortensen and Kirsten Dunst are Chester and Colette MacFarland, a cultured and well-off American couple travelling through Greece in the early 60s. The suddenly very busy Oscar Isaac is Rydal, another American who speaks some Greek, making a little money giving tours of the Parthenon and making time with wealthy debutantes. It’s established early on that Rydal isn’t above scamming a little money from the more naive who cross his path, and the MacFarlands aren’t without their own secrets—they’re on the run, a result of Chester’s bad decisions in the past.

Tonally, it’s very much like The Talented Mr Ripley—the fine linen shirts, Panama hats, strands of blonde hair and sunglasses covering doubt and lies. Two handsome men, neither terribly sympathetic, and a woman caught between them.

Where I found The Two Faces of January came up a little short is in the intrigue. These are compelling actors, but I started to feel they were a little adrift. Is Rydal really going to run away with Colette? Or is the real connection between Rydal and Chester? Shouldn’t we be rooting for someone to survive these bumpy bus rides through the Aegean?

By the end, as the plot has had its way with these people, I was unconvinced of any true connection beyond the circumstantial and a modicum of sweaty desperation.

Still, if you’re looking for a sunny travelogue and a mildy diverting mystery, delivered with a measure of stylish aplomb, I’ve certainly seen worse. 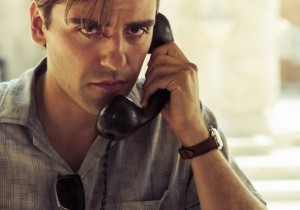