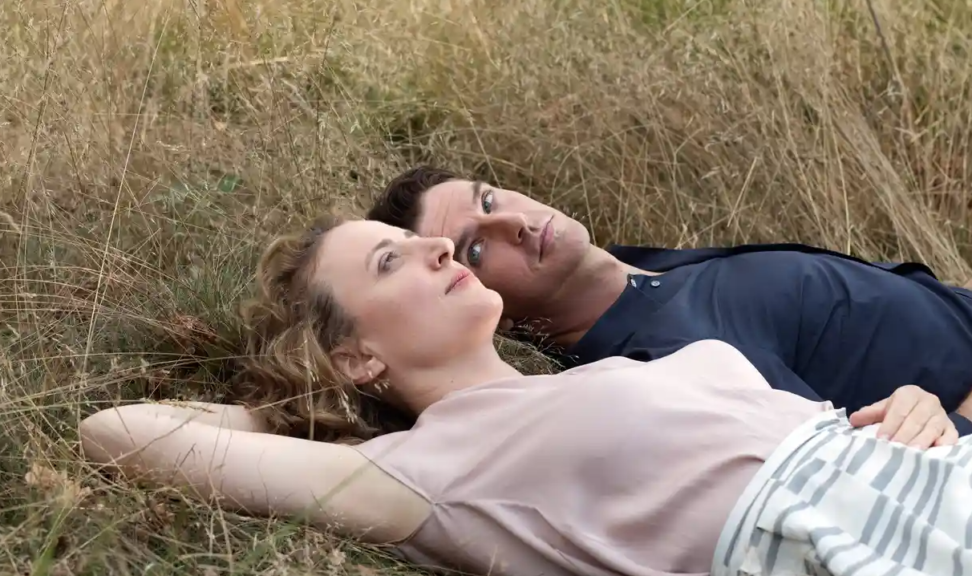 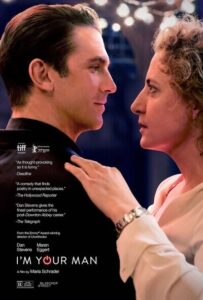 I’m starting to wonder if there’s nothing Dan Stevens can’t do. The guy has the range and chameleon-like mutability of a Tilda Swinton, from Downton Abbey to The Guest to Beauty And The Beast. I figure the only reason he’s not a bigger star is he’s so unrecognizable from role to role.

I’m Your Man is set in near-future Berlin, where single museum researcher Alma (Maren Eggert) is busy working to translate ancient cuneiform tablets, hoping to prove early civilizations valued poetry and creative writing. Meanwhile, she’s also signed on (for the money) to be a test subject for a brand new advanced artificial intelligence.

The android, Tom (Stevens), will move into her lovely apartment for three weeks. He’s been programmed to be her ideal mate, based on what the company was able to parse about her requirements in a romantic partner. He’s courteous, chivalrous, and very clever. He’s online so provides her with any information she needs, like an anatomically correct male edition of Siri or Alexa. 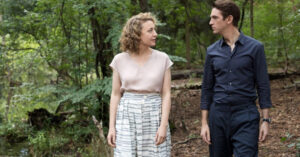 He also attempts to stoke and predict her amorous inclinations, which doesn’t go especially well since Alma is made happy by her work and otherwise resistant to conventional romantic gestures. Tom has a lot to learn, but he’s keen.

Did I mention this is a German language film? Yes, Stevens acts in German, which he’s apparently a reasonable speaker, though the film acknowledges he does so with an English accent.

There’s a lot of Robots-loving/hurting-Human narratives in science fiction cinema and TV, most prominently in my mind is Hal-9000 from 2001: A Space Odyssey. We’ve also got Data in Star Trek: The Next Generation who gave weekly insight into what it means to be human from the perspective of an unemotional-but-humanlike machine, and more recently Ultron in Avengers: Age of Ultron, who, well, tried to kill us all. The example that feels the most like I’m Your Man has to be Samantha in the wonderful 2013 picture Her. 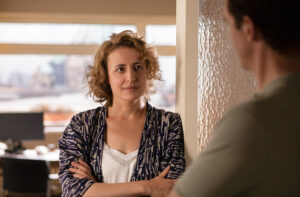 The connection to that film doesn’t make itself immediately evident here, however. I’m Your Man is, at first, a whole lot frothier a movie, structured like a romantic comedy. The awkward humour of Alma having to introduce Tom around her friends and colleagues while he acts like a charming but strangely robotic fellow is milked for all its worth. Of course Alma’s resistance to Tom’s charms is slowly broken down as he does everything he can to be her ideal.

But the film’s a lot smarter than it first lets on. It has some fun undermining the tropes the romcom is built around — a genre that makes a lot of assumptions about what women want. 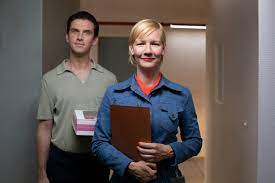 This is where I’m Your Man gets genuinely interesting, and starts to resemble Her. Tom forces Alma to come to terms with what companionship actually is. All he wants is to make her happy — which may be both too much and not enough for her.

The intersection of technology, desire, and friendship ends up making for an unexpectedly complex, if breezy, cinematic experience, with solid work from Eggert, Stevens, and  Toni Erdmann‘s Sandra Hüller in support. 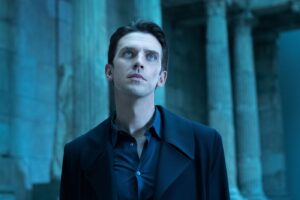 Come for Dan Stevens playing a German-speaking love-bot, stay for the surprising depth in the concept and execution.