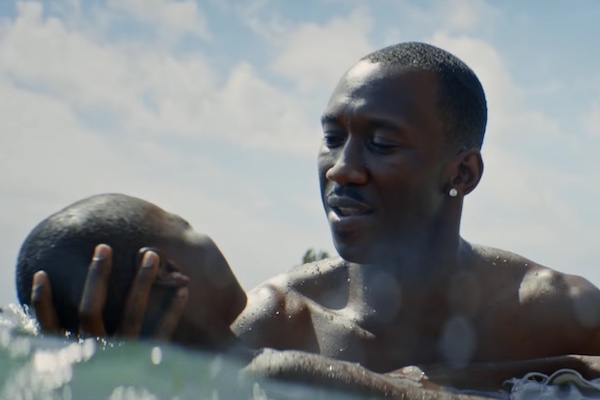 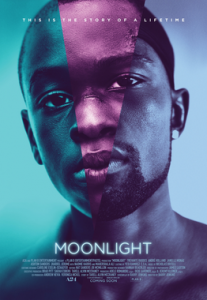 The story of a boy who becomes a teen who becomes a man, but this isn’t a coming-of-age movie. It’s a cultural snapshot in three chapters.

Little (Alex R. Hibbert) is a black boy living in Miami. He’s beaten up by his classmates because he’s different, and his addict mother (Naomie Harris) thinks she knows why. She thinks he’s gay. The local drug dealer (Mahershala Ali, who you may recognize as Remi from House of Cards) and his girlfriend (the singer Janelle Monae) take an interest in the kid. In the second chapter Little is now called by his name, Chiron (Ashton Sanders), and the bullying has stepped up, maybe made worse because he has a close friend, Kevin (Jharrel Jerome). In the third part, Chiron is now known as Black (Trevante Rhodes), and his life, and identity, has changed in response to cultural expectations and peer influence.

The film is a look at traditional masculinity and male role models in this one segment of the African American community, and how difficult it must be to come out in that kind of environment. It’s also an extraordinarily beautiful film, using a lot of hand-held camera that never feels self-conscious or arty. The only disappointment here is the otherwise reliable Harris, whose character never quite escapes cliché, but the performances all around are so good, the scripted material is elevated and enervated .

Special recognition to the three actors who play Chiron as he ages. Though they don’t entirely look alike, they’re immediately believable as the same character. That easy suspension of disbelief also has to be a credit to Jenkins’ control and confidence as a filmmaker. This is powerful stuff. 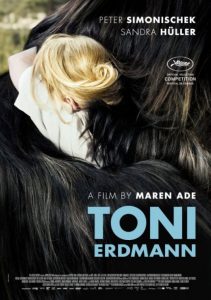 Winfried Conradi (Peter Simonischek) is a bit of a clown. The German piano teacher enjoys jokes and pranks and the like, which annoys the hell out of his workaholic daughter, Ines (Sandra Hüller). She lives in Bucharest, where she’s a consultant to an oil company looking to streamline—she’s coming up with ways to outsource and let go of a large segment of their workforce. It’s a brutal job, and it isn’t helped much by the unexpected appearance of Winfried and his pathological need to interject with an awkward remark or gag into every conversation. As he adopts an entirely fictional character, the Toni of the title, you start to wonder how long Ines is going to go along with it.

The film shambles a little like Toni, lurching down a few alleys that turn out to be totally blind. It can’t quite sustain the extended running time, nor its genre, as it steps away from the absurdist jags to become a realist drama about the costs of globalization, corporate ambition, and chauvinism. Just about when I’d had enough, as it veers from a scene unremarkable to one totally implausible, it pays off:  In the final 25 or so minutes, Toni Erdmann repays your patience with a sequence so unexpected and farcically hilarious, it earns all its red herrings. It even finds a way to be moving, too.

See it before Hollywood remakes it at 100 minutes with maybe Bill Murray and Anne Hathaway, or Steve Carell and Rooney Mara.