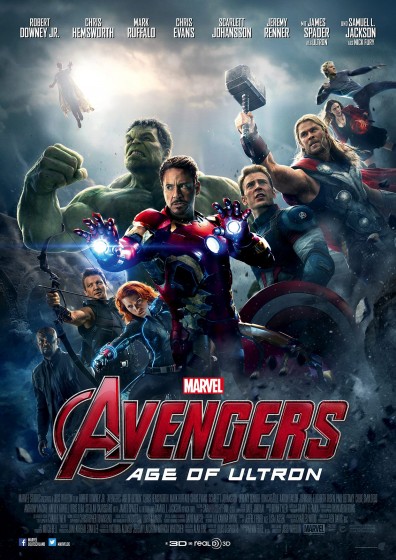 Written and directed by Joss Whedon, from the Marvel Comic created by Stan Lee and Jack Kirby

After 10 movies set in this particular Marvel Cinematic Universe, we know these costumed folks now. They’re fun to spend time with, what with the jokes and fighting and punching. But the filmmakers also have the added pressure of trying to top what went before, to bring something new and, naturally, bigger than what they did the last time.

In that they’ve succeeded. This is the most massive Marvel movie yet: The largest number of characters, the most frenetic battle sequences, and the most breathless, locomotive plotting.

I would argue that bigger does not equal better, but because it’s Joss Whedon at the helm, and he is undeniably a master at doing all of this,  this circus holds together and gets where it needs to go. For the most part. 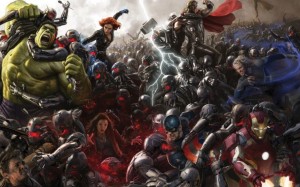 We reengage  with our heroes in mid-shield-toss—Captain America, Thor, Iron Man, The Black Widow, Hulk, and Hawkeye (Chris Evans, Chris Hemsworth, Robert Downey Jr, Scarlett Johansson, Mark Ruffalo, and Jeremy Renner, respectively)—working as a well-oiled machine while raiding a Hydra base atop a castle in the fictional Eastern European nation of Sokovia.

This is despite Tony Stark having pretty much retired from this kind of thing at the end of his third film when he destroyed all his armours. He’s right back in the saddle here. Would have been nice to explain the turn-around, especially given he can now operate his suits/drones remotely. Why does he bother to put them on at all?

The team certainly feels like a unit, apparently having been of late attacking Hydra bases all over the world in the time between movies. Would have been nice to know that on the Agents of SHIELD TV series, too, given those folks have been doing the same thing.

I know it sounds a bit inside baseball to complain about these fragments of continuity, but that’s one of the things Marvel Studios has done so well to date; the seamless connection with all the properties. No matter the rotation of onscreen and directorial talent, we have the feeling this is all happening in the same place. One of the primary joys of rewatching all 10 movies recently was appreciating the care to all that series unity.

The Avengers come away from their castle attack with Loki’s alien pig-sticker from the first movie, and a bunch of high tech materials, all of which get Tony Stark salivating. He and Bruce Banner set out to create an artificial intelligence, something Stark believes is the key to protecting the world from future alien attack. But they struggle to make it happen. Just as they’re about to give up, Ultron achieves consciousness. Though he’s been programmed as a peacekeeping tool, he’s deeply malevolent. He seems to believe that the only way to true peace is the elimination of human beings altogether. 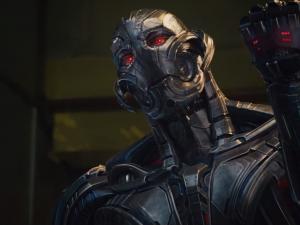 Or, at least, I think that’s what’s going on. Ultron—an eight-foot chrome dude speaking in the mellifluous tones of James Spader—enjoys existential philosophy when he’s not in a petulant rage, but he’s not great at articulating what his real motivations are, or why he finds humanity so abhorrent. His connection with his “father”, Stark, isn’t nearly as potent as I would have expected—in fact, Downey Jr, usually the best part of these movies, is a bit muted here. The Frankenstein analogy is pretty light.

But Ultron does bring the scares, what with being so imposing and able to control all of Stark’s drones, as well as build his own. Credit to Whedon and Spader for creating such a unique villain, even if he isn’t as compelling as he might otherwise have been. 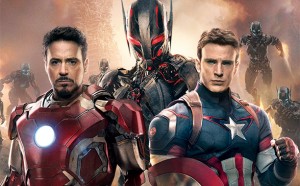 Also on the scene, twin Sokovian powers, Pietro and Wanda Maximoff (Aaron Taylor-Johnson and Elizabeth Olsen). He’s fast and she’s weird, as Maria Hill (Cobie Smulders) so eloquently puts it, and they have a lasting beef with Stark, so throw in with the shiny fellow until they twig he’s a destructo-droid. 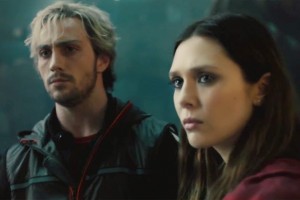 By my count there are five major action set-pieces, taking place in a few far-flung locales such as Johannesburg (I recognized a hilltop location from another sentient robot movie, Chappie!) and Seoul—it’s great to see cities besides New York get levelled by huge superhero battles.

We also learn a few new things about our heroes—there’s romance in the air, and one is even revealed to have a secret family. The Hulk is, once again, a key component in all of this—and the question of whether all that rage can be controlled.

This is what Whedon does best, the character stuff, and I have to say, my favourite scenes were ones where the people are interacting without punching anyone. Whedon also has a gift for gags—the script is just packed with one-liners, which alleviates some of the doomy tone that naturally comes with the threat of our robot overloads bringing on the end times. 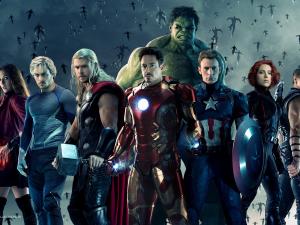 Having said all that, why isn’t Avengers: Age of Ultron quite as much fun as the last one?

Well, it could be that this is a two-hour-and-20-minute superhero movie with a little too much going on. We have this sprawling cast, including support from Don Cheadle, Andy Serkis, Anthony Mackie, Idris Elba, Samuel L. Jackson, Claudia Kim, Stellan Skarsgaard, Hayley Atwell, and in the role of the newest Avenger, the android called The Vision, Paul Bettany.

You can feel the strain, the effort to get the wheels of the plot moving, set up each successive action sequence, but also give some genuine human moments between characters, some of whom aren’t actually human. Those are great, but they feel a bit rushed, despite the inflated running time. I wanted more of the heroes dealing with their personal shit so we could better understand what’s at stake for them individually.

For example: At one point, Wanda gives each of the Avengers a hallucinogenic look at the darkness in their souls, and it’s harrowing stuff. I was hoping for more of a payoff from those glimpses, but discussion of what happened there is pretty much trammelled in the subsequent scenes by the robots attacking and trucks flying, cities levitating, Hulks hulking, etc.

I also didn’t find the repeated CGI robot legions as effective as the crowds of Chitauri from the last Avengers movie, though that might be due to simple familiarity. It’s a problem with CGI in general, I find; a swarmy sameness. And it’s even worse in 3D, which always gives me a miserable headache. I really wish this gimmick would go away—it unforgivably cheapens the effects and darkens the screen. 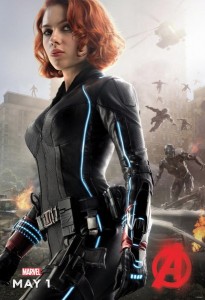 Really, though, if it’s enormous action spectacle you’re after, I dare you to go into this and be disappointed.  If I have a few nits to pick, it’s because the standard set by the last Avengers film, and by, say, Captain America: The Winter Soldier, is so high. I want Shakespearean drama, gods and robots, but that’s a very tall order. It’s to Marvel’s credit they’ve managed it at all in the past. Whedon did it with the first Avengers movie, which  is a modern classic, before actually doing Shakespeare in his home. And the first Iron Man and Captain America: The Winter Soldier both achieved something that superseded the tropes of the genre. Avengers: Age of Ultron is somewhere in the middle of the pack.

A confession: This movie does have a Vision in it, a favourite character from my childhood, and that made my inner comic geek squee with excitement. 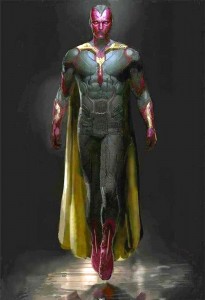 Given the alternative, I’d really rather have a summer blockbuster that tries to do too much than too little—and in that it certainly resembles every over-plotted and outrageous superhero team comic I’ve ever read. And when my brain has recovered from the aural and visual overload, I’m sure I’ll go see it again.

But no 3D the next time.