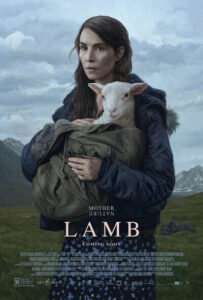 Lamb is distributed in North America by A24, the American company that’s defined itself in the marketplace with stellar indies and horror films, amongst them Midsommar, Hereditary, The Lighthouse, and Ladybird. The trailer for this picture suggested it leans toward the deep creeps, but it’s a very different film than the marketing suggests. 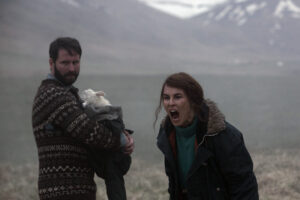 Lamb is from Iceland, the story of a child-free couple, Maria and Ingvar (Noomi Rapace and
Hilmir Snær Guðnason), who run a sheep farm in a gorgeous Icelandic valley surrounded by dramatic, fog-shrouded peaks. After a haunted opening at Christmas with a heavy breathing threat loitering in a snowstorm outside their farmhouse, we flip to summer — all green fields and diffuse daylight. The first 10 minutes is almost entirely free of speech, just life on the farm and the introduction of the characters — including many of the sheep, some of whom are pregnant, a border collie and a tabby cat. Jóhannsson frames the animals and the human characters at their eye level, smartly edited to bring the best performances.

One of those sheep produces a healthy baby that’s a little unusual — a lamb’s head with a human body. Jóhannsson is coy at first with what’s going on here, but we know this is a special kid. It certainly means a lot to this couple though if they discuss the practicalities of this event we aren’t privy to those conversations. It’s mostly just long, yearning looks between them and swaddling the newborn in blankets to hide its essential nature, much to the dismay of its birth mother continually bleating at the window. When Ingvar’s black sheep brother, Pétur (Björn Hlynur Haraldsson) shows up unexpectedly, what’s he going to make of it? 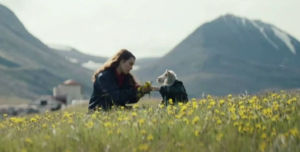 What we’ve got here is an allegory for acceptance of difference, told with a dollop of modern folklore and a whole lot of silence. Though we get notes of horror, especially in the final 20 minutes, this is in no way a horror movie. It’s plenty unsettling though, and not without a few laughs — material like this you can’t take entirely seriously, and happily the filmmakers know that.

The lambykins, Ada, she’s plenty cute. The picture does a good job making us fall in love with her as much as her human parents do — even as the special effects to create her aren’t flawless, and we never entirely understand how human she actually is. This while hiding just outside the frame is that sense of imminent foreboding, that all of this is going to sour before long. 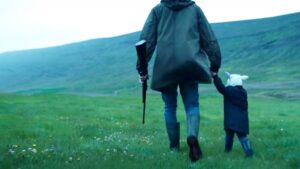 Naturally it does, but it takes its sweet time getting there. Lamb is much happier to be ensconced in the peculiar family dynamic, but hiding beneath this pastoral, domestic drama is a monster movie. While it’s all plenty involving, I ended up wishing the monster reared its horned head earlier and the film provided a more emotional, visceral conclusion.