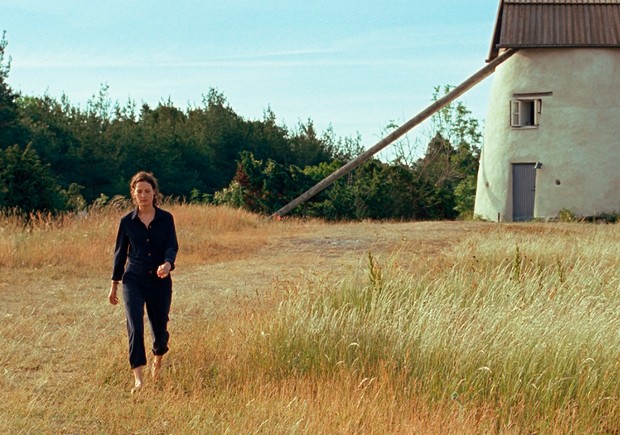 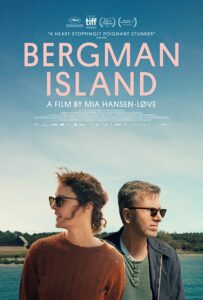 As a FYI for new readers, I help program films at Carbon Arc Cinema in Halifax. The cinema offers tickets and screenings through their website and in person through fall and winter seasons (in non-pandemic times) at the Museum of Natural History on Summer Street. This Friday Carbon Arc relaunches the in-person screenings with this film.

Bergman Island is a treat for anyone interested in cinema’s present and past, doubly so for Ingmar Bergman fans, as well as those who’ve enjoyed Hansen-Løve’s semi-autobiographical work — including the lovely, pensive Things To Come. 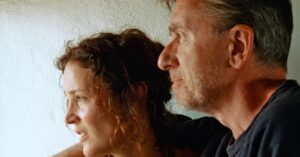 It’s pretty much common knowledge to cinephiles — and included in Hansen-Løve’s bio on the IMDB — that she met and worked as an actor with French auteur Olivier Assayas in her late teens, eventually becoming his romantic partner. They’re not together now but they did have a child. Bergman Island would seem entirely related to her lived experience.

Chris (Vicky Krieps, busy lately) and Tony (Tim Roth) are romantic partners and filmmakers. Tony is older and more established. They’re enjoying a working vacation on the summery Baltic island of Fårö, just off the Swedish coast, famed for being the home and preferred shooting location for a lot of Ingmar Bergman’s films. The room the couple will sleep in was where Bergman’s 1973 TV series Scenes From A Marriage was shot. 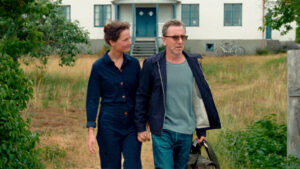 The sense of a couple in the taking-each-other-for-granted stage of their relationship is strong here, but as with Things To Come, Hansen-Løve seems uninterested in anything approaching high stakes or melodrama — her ease with her actors and her mise-en-scène, combined with this meta affection for Bergman makes for a comforting, lived-in quality to a picture not particularly full of event.

This while Tony is repeatedly on the phone with producers, getting a new project off the ground, and attending a screening of one of his own films on the island with the associated attention from fans. Chris has been stuck trying to get her own script finished, and eventually gets a chance to talk about it with Tony.

Cue the movie within a movie. I won’t say too much about that, but it features a younger woman (Mia Wasikowska) struggling in her feelings for a former lover (Anders Danielsen Lie) while both attend a wedding on Fårö.

Structurally, this is quite the high wire act — Hansen-Løve devoting so much of the running time to another, reflexive storyline. Naturally, the second story increases the meta-experience, commenting on both the central narrative and the ongoing shadow of the Swedish master filmmaker. That’s where the film gets really interesting.

Bergman Island overlaps its parallel narratives in a delightful and slightly giddy way. Hansen-Løve’s confidence with her storytelling never seems too precious or too clever. Instead it’s fun, affecting, and will likely prompt a lot of “what was going on there” conversation with your cinepanion when the credits roll, whether either of you are an Ingmar Bergman acolyte or not.

The performances are good across the board, though I know Hansen-Løve originally cast Greta Gerwig and John Turturro in the main roles, which I would’ve loved to have seen. You’ve got to wonder whether Hansen-Løve ever considered an all-Swedish cast.