Directed by M. Night Shyamalan | Written by Shyamalan, based on the graphic novel Sandcastle by Pierre-Oscar Lévy and Frederick Peeters | 108 min | Crave Plus 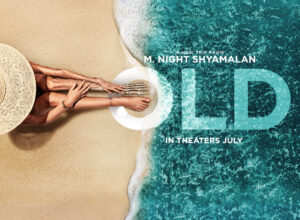 If you’ve seen the trailer, you know the premise: A group of people vacationing at an exclusive resort on a tropical island head to a remote beach for the day where strange things start to happen.

We’ve got our central couple, Guy and Prisca (Gael García Bernal and Vicky Krieps), having troubles in their relationship and with her health, and their kids, 11-year-old Maddox and 6-year-old Trent (Alexa Swinton and Nolan River, who’s the movie’s MVP — this kid is a star).

And already on the beach, a rapper whose handle is Mid-Sized Sedan (Aaron Pierre).

It’s not long before the strange things take form: The youngest on the beach change first, and the fastest, marked by sudden maturing. (Trent becomes Luca Faustino Rodriguez and then Alex Wolff, Maddox becomes Thomasin McKenzie, and Kara becomes Eliza Scanlen.) In the adults, dormant or controlled diseases suddenly manifest, marked by sudden death or outsized tumours. A day on the beach is now these people’s entire lifetime.

Why don’t they just leave? Because reasons. 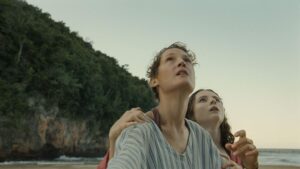 Typically for a lot of vintage Shyamalan, the film rolls out like an outsized episode of The Twilight Zone, with a dash of The Monkey’s Paw. It doesn’t come with a twist the size of an Unbreakable or The Sixth Sense, but we do eventually get an explanation of what’s going on, though I’ll be surprised if that’s going to satisfy many people. We have to take a lot on faith, and the rest on a conspiracy that’s not rooted in anything close to plausibility. In other words, this is a lot like The Village or The Happening.

And as we get to the halfway point, you may start to wonder where it’s all is going. The cognitive dissonance here is that a movie with these deep existential stakes, built around the fear of time slipping through our fingers like beach sand, also seems like it’s heading nowhere fast.

Yes, it’s a horror picture, if you find aging horrific (And a lot of people certainly do). Surprisingly, it’s not especially gory — Shyamalan is coy with his camera, framing eyes in the singular, reminding us we’re missing the depth in the story — if there is any. I gather it isn’t R-rated, which is probably why it’s absent visceral grue. 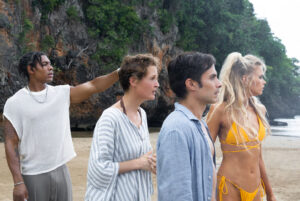 Larger themes at play are pretty thin — maybe something about how some people are completely comfortable with the sacrifice of the few for the betterment of the many, and how the tragedy of life can bring people together who were otherwise on the outs. How those thoughts might relate to these particular days we find ourselves in as we hopefully step out of a pandemic? I’ll leave those with you and your cinepanions. 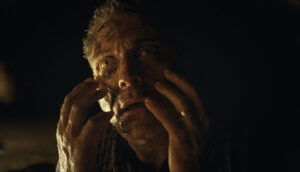 Also typical with Shyamalan: the film is gorgeously shot and edited, with a grace in the camerawork that reminded me of the best moments in the lovely looking Signs.

The emotional heft, such as it is, is left to that central family. They all do good work as children grow up and are replaced — it makes you wish the beach was a little less crowded, to give those actors more time to find their characters and allow us to care more about them.

This even while the psychological realities of children becoming adults overnight, having to somehow accumulate decades of emotional experience in a matter of hours, is never addressed. 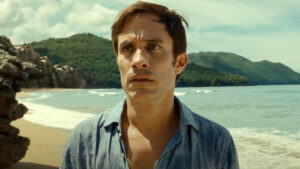 Incidentally, the question of the Jack Nicholson and Marlon Brando film that comes up? It’s The Missouri Breaks from 1976. Why that’s important? I actually doubt it is at all.