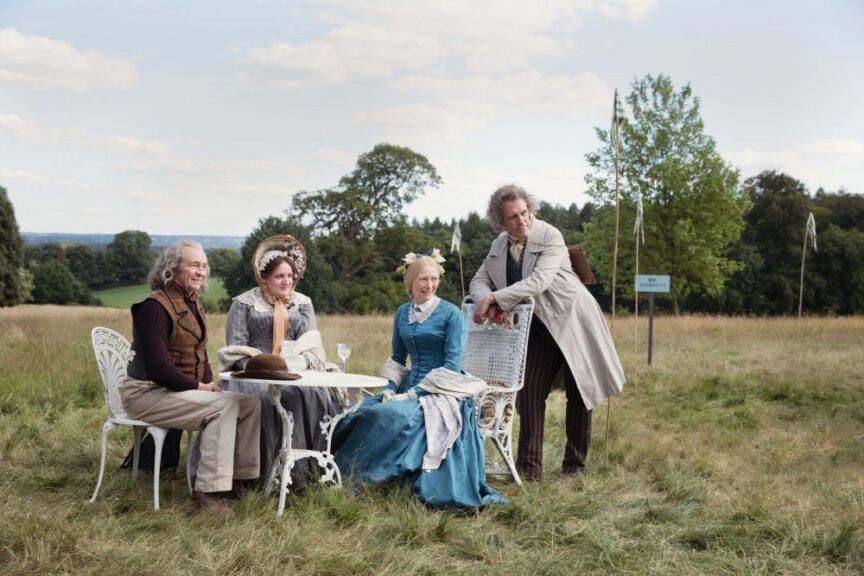 Directed by Armando Iannucci | Written by Iannucci and Simon Blackwell, adapting the book by Charles Dickens | 119 min | Crave Plus 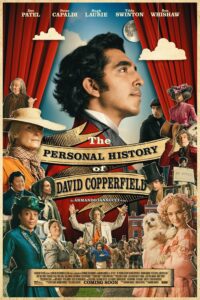 Words I’ve used to describe Iannucci’s work on films like In The Loop, and The Death of Stalin  include “biting” and “hilarious,” and I’d carry forward that kind of language for his newest effort, and add to it “warm” and “engaging” in this adaptation of a gem of Victorian lit. I’m far from a Dickens scholar, but I grew up watching Richard Curtis and Ben Elton’s Blackadder, which at times played off of Dickens’ humour with a knowing, postmodern edge. This film delivers a familiar dose of those kinds of character-driven, absurdist laughs, while showing sincere affection for the semi-autobiographical source material.

Dev Patel is the eponymous David (Ranveer Jaiswal as a child), who grows up in a rural environment with a single, loving mother, Clara (Morfydd Clark), but when she marries a cruel suitor David is sent away to a factory in London. Right away we get the lesson  — it’s an unpredictable fate that sets events in motion, and class and position in life is no guarantee of happiness or security. Also, being from the upper class is no guarantee of a strength of character or even kindness. As David becomes a young man we see his gifts as a wordsmith, but we also see he’s susceptible to flattery and class consideration. His friends and family call him by a succession of nicknames, a constant reminder of his struggle to secure his identity. 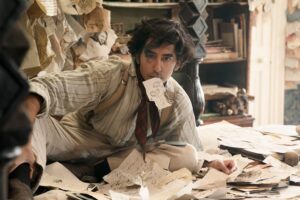 He’s surrounded by a colourful cast — nicely colourblind, too — of enthusiastic characters. There’s too many to comprehensively list, but maybe most wonderful is David’s brittle aunt, Betsey Trotwood, giving Tilda Swinton her most extroverted role in some time. Ms Trotwood’s companion is the cerebral but doddering Mr Dick (Blackadder veteran Hugh Laurie). Also in David’s orbit is a secret admirer, Agnes (Rosalind Eleazar), the perpetually short-of-cash, Mr Micawber (Peter Capaldi), the perpetually in-his-cups, Mr Wickfield (Benedict Wong), his chum from school, Steerforth (Aneurin Barnard), Steerforth’s mother (Nikki Amuka-Bird),  the conniving Uriah Heep (Ben Whishaw), and David’s love interest, Dora Spenlow (weirdly also played by Morfydd Clark, who is David’s mother early in the film — for this second character she channels Jane Horrocks). They all have something to teach David has he makes his way in the world and he starts to understand some of the adults around him are no more certain or secure of their path than he is. 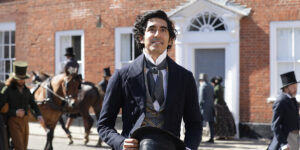 With DP Zac Nicholson on board, Iannucci ups his style quotient from his previous films — it’s in the wide angles chosen for both the English countryside and London fish market, as well as a lovely, theatrical approaches, like the use of projection when needing to illustrate events in the recent past. 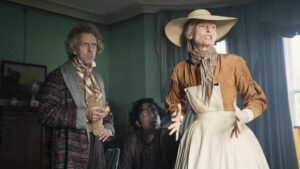 As the events of David’s life mount up, the film picks up speed. The pace in the last act is fairly breathless, to the point where it feels Iannucci and Blackwell are attempting to stuff in as much as they can from the book while sacrificing a little of the easy grace they established earlier in the film. It’s a small criticism, and none of the hurriedness comes close to ruining the film’s giddy pleasure — a class commentary on England of 170 years ago, a commentary that Iannucci somehow succeeds in making both relevant and relatable.