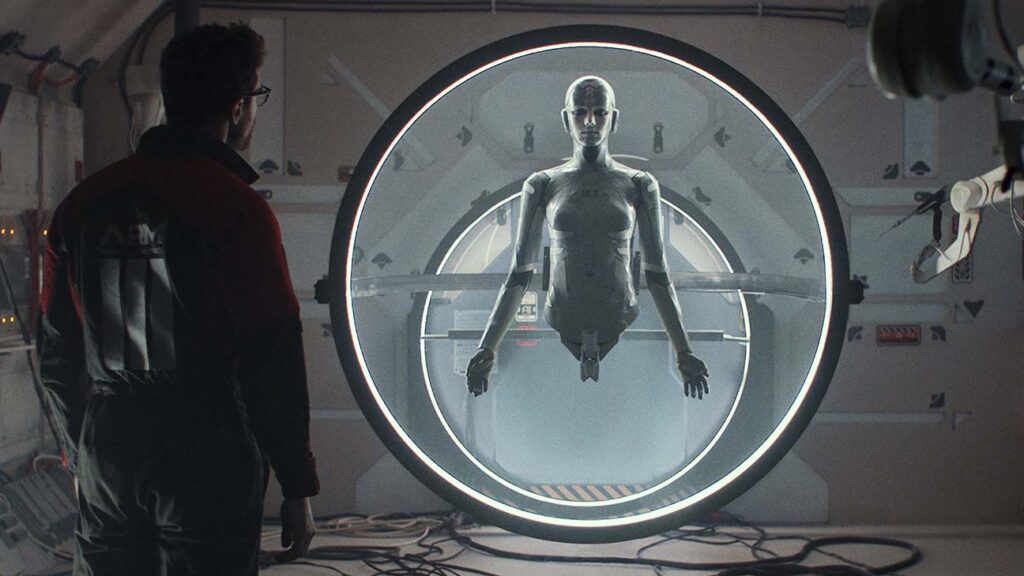 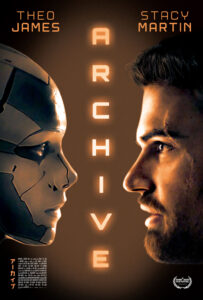 The first feature from a visual effects supervisor on Moon channels a lot of the impressive visual imagination he brought to the Duncan Jones movie. His Archive works with a few promising science fiction concepts while being a pulpy amalgam of other, more original films. 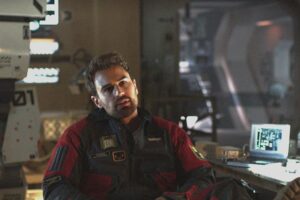 We’re on a remote Japanese mountain side in winter, the kind of place where snow is always gently falling but very little accumulates. George Almore (Theo James) is a robotics engineer who’s been given a grant to develop advanced robotics. He’s doing pretty well, but he’s reluctant to share his progress with his employer, Simone (Rhona Mitra). That’s because he’s been using the essence of his dead wife, Jules (Stacy Martin) — and how he has that essence is a whole other plot thread — to help program his new artificial intelligence.

His first version is a box-like robot, J1, not a far cry from Huey, Dewey, and Louie from Silent Running. The second, J2, is a more sophisticated petrol pump, like a maintenance droid from Star Wars, but her emotional intelligence is stuck as a teenager, an especially unhappy one. With J3, George is finally is able to create an AI who somehow estimates his wife’s physicality and emotional capacity, fully Ava from Ex Machina. 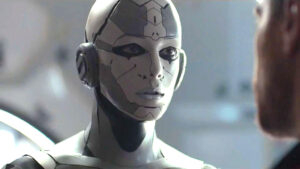 Rothery’s film isn’t without drama and a certain sophistication. The most sympathetic character onscreen ends up being J2, and given she has no anthropometric qualities, that’s a real accomplishment. Her private, inarticulate loneliness is where the emotional heart of the film lies, but the narrative ends up leaving her behind to take twist and a turns that, in the final analysis, don’t feel entirely earned. There’s a lot to appreciate in Archive‘s mysteries, but the eventual payoff doesn’t quite work. 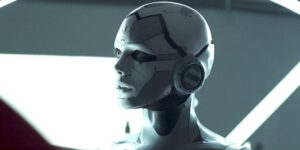 One of the film’s problems is in the casting. Theo James worked as tall, dark and stolid in the Divergent series, and is equally a handsome man with a single expression here. When we need to believe George is missing a certain empathy for his artificial creations, his performance works, but when it comes to believing George’s grief is an engine that drives his efforts to resurrect some semblance of his wife, James is unable to convey any kind of internal life. It’s an almost fatal flaw to the film’s logic.

But there are things here for fans of the look of Alien, of Steven Soderbergh’s take on Solaris, and of Ex Machina, if only because Rothery himself is clearly such an admirer of all these better films. If he doesn’t quite find his own voice in the shadow of those influencers, it’ll be interesting to watch what he produces in subsequence versions, uh, visions.