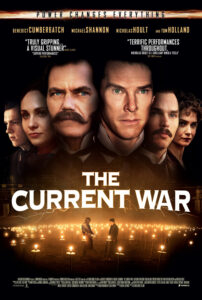 This is a historical drama with history.

The Current War debuted at the 2017 Toronto International Film Festival with the whiff of prestige. That’s due to the cast, which includes Benedict Cumberbatch, Michael Shannon, Tom Holland, and Nicholas Hoult — and a very American story of entrepreneurial genius and competition about the race to commercial electrification between Thomas Edison and George Westinghouse in the 1880s. 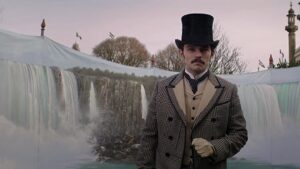 The problem was the film was received at TIFF with a resounding “meh”, and while it was being recut for release later that year the revelations about producer and now-convicted rapist Harvey Weinstein came to light. A number of features, including this one, were collateral damage of his company’s collapse.

Reclaimed by Gomez-Rejon (whose previous film, Me And Earl And The Dying Girl, is an indie gem) The Current War found another distributor and limited release in cinemas in October 2019 in this cut — with five added scenes but somehow 10 minutes shorter — and is now available on demand. But that initial prestige has been scrubbed away. 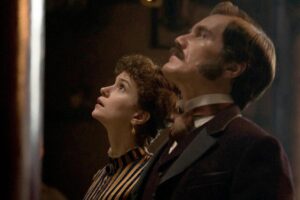 Gomez-Rejon prefers gravity-defying camerawork and all the gorgeous sets and costumes Weinstein’s money could buy, and there’s little doubt in a less just universe this film would’ve been in the running for awards come Oscar season, even if only the technical ones. The film is at least entertaining if not terribly deep, rooted by solid performances and a promising story. It illuminates the history clearly, but with not a lot of charge. 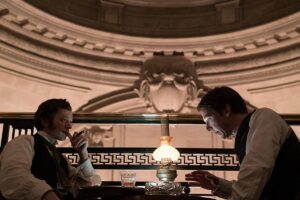 Cumberbatch is Edison, playing one of his becoming-familiar big-brains-on-toast characters, a man who, despite being brilliant and accomplished, sabotages himself with pride and overweening ambition in his effort to be first to fill American cities with electrical light. 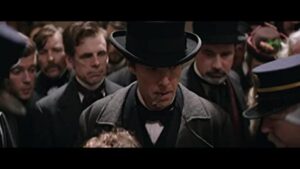 Shannon is terrific as Westinghouse, the industrialist who plays fair, more or less. Holland is Samuel Insull, Edison’s assistant and the conscience of the film. Hoult is Nicola Tesla, convincingly obsessive in his own way, a character type we haven’t seen from Mr Hoult to this point. Katherine Waterston, Tuppence Middleton, and Matthew Macfadyen, with an added bulbous red nose playing financier JP Morgan, all bring added flavour to the production, though this isn’t a film where the female characters get much to do but motivate the men in one way or another. 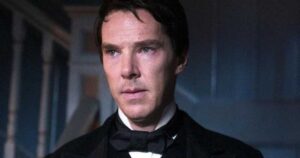 I wondered, idly, why in the film they chose to show the electrocution of a horse rather than an elephant. The story goes that Edison wanted to show the danger of Alternating Current, the preferred method of Nicola Tesla, as opposed to his preferred, safer, but more expensive Direct Current, and so electrocuted an elephant with the AC. But, apparently, the movie is more historically accurate than the apocrypha I’d come to believe.