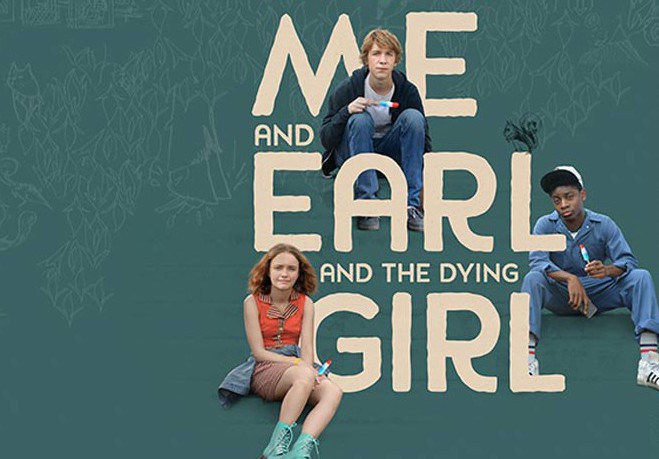 Directed by Alfonso Gomez-Rejon, Written by Jesse Andrews adapting his own novel.

It wouldn’t be hard to be cynical about this movie. After the  calculated-to-jerk-tears machinations of last year’s teen cancer hit The Fault In Our Stars, having another teen cancer movie show up  almost exactly 12 months later seems pretty frikkin’ calculated, too.

But trust me on this one: this is very fresh, different, and heads and shoulders above that last picture. Added bonus: no making out in the Anne Frank house. 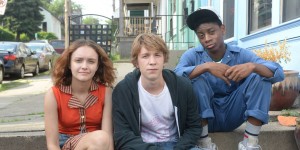 While it does have a bit of coy self-awareness, it’s much more indie and appealing in that Sundance-annointed way. I make it more of a kin with The Spectacular Now and Be Kind Rewind than, say, Wish I Was Here or Perks of Being a Wallflower.

Thomas Mann is Greg, a teen gliding through high school like a far less-loved Ferris Bueller. He’s mastered the ability to hop between the social nations of his small-town Pennsylvania teen milieu. It actually seems pretty impressive at first: He might not be able to commit to any real chums, but he also manages to not have any enemies or sign on to any tribal doctrines. 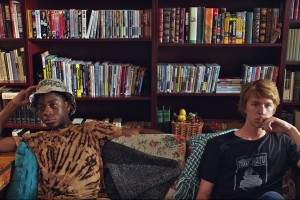 His father (a hilarious Nick Offerman) is similarly disengaged from anything except the food and culture of South East Asia. His mother (Connie Britton) finds out a classmate of Greg’s, Rachel (Olivia Cooke), has been diagnosed with cancer, and Mom insists he go over to Rachel’s place and keep her company, despite the fact Greg and Rachel barely know each other. Rachel suspects Greg’s pity, but indulges him. They become friends as he starts to spend more time with her. You get the sense Greg figures she’s safe to get to know since she might not be around for too long. 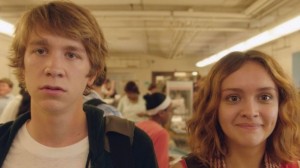 If we hadn’t sussed our unreliable narrator’s issues ourselves, though Rachel’s eyes we start to see Greg’s real problems: massive social anxiety, fear of commitment, and lack of self-esteem. We also discover that one of the best things he’s got going on in his life is his long friendship with Earl (RJ Cyler)—which he totally undervalues—and their ongoing project to remake their favourite films with goofy, comedic changes to the titles and plots.

This is a great gag for anyone in the audience who might be a film buff, and it makes me suspect those critics who creamed over this film at Sundance probably saw a lot of themselves in Greg. Hell, I did, too. But any teen movie that has multiple Werner Herzog jokes in it can’t be bad.

A classmate who Greg has a crush on suggests he and Earl make a movie for Rachel, which forces them to come up with some original ideas, not just “Swede” movies they love. Meanwhile, Rachel is struggling through her cancer treatments. 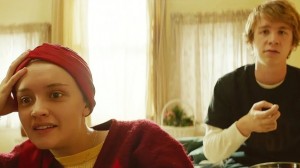 The film does lose much of its jaunty comedic tone as it goes, tackling serious themes in a heartfelt and moving way, but it’s never less than sensitive, and much less manipulative and overt than that one from last year I mentioned above. It helps that along with the solid performances from all involved (including Molly Shannon as Rachel’s mother) and sharp script, this is a film with a lovely look, interesting framing, and a great sense of place.

It also has room for a bang-on drug trip sequence. It’s amazing that anyone can bring a new spin to being high in movies, but credit to Gomez-Rejon, it’s just the right kind of goofy.

Pretty sterling all the way around, Me And Earl and the Dying Girl is a surprise—genuine summer counter-programming, a balm for those feeling blockbuster fatigue.

Me And Earl And The Dying Girl opens at The Oxford on Friday, June 26