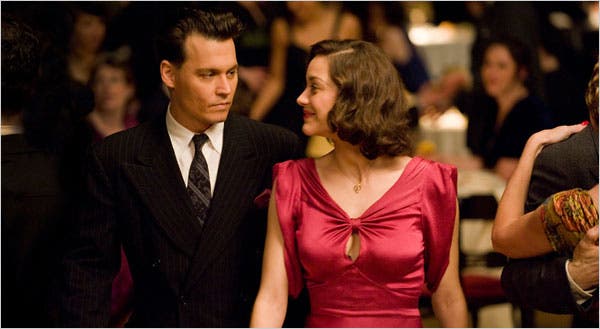 Directed by Michael Mann | Screenplay by Mann, Ronan Bennett and Ann Biderman, based on the book Public Enemies: America’s Greatest Crime Wave and the Birth of the FBI, 1933-34, by Bryan Burrough | 140 min | Amazon Prime 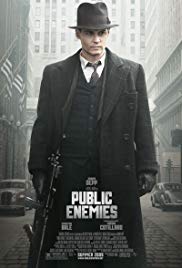 Michael Mann is known for his intense dramas, suspense thrillers and shooting with the most high tech digital cameras available. His film before this one, Miami Vice, wasn’t a box office success, but I loved it.  I think Public Enemies is in many ways a more ambitious movie than Miami Vice, and if it’s not quite as satisfying, it gets points for saying something about organized crime, and how the invention of a federal police force in America, the FBI led by Herbert Hoover, also changed the culture, and maybe not for the better.

I remember I was critical of many things in the movie when I first saw it in the cinema, but I’ve since found it on Blu-Ray and I have very much enjoyed seeing it again. And this is what I think Mann does as well as any filmmaker working: his thrillers are full experiences that you live in and they stay with you afterward as a result. 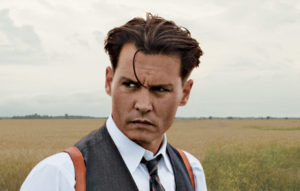 For those who don’t know, John Dillinger was a bank robber in the early-to-mid-1930s who through charm, determination and relentless self-belief became a folk hero to many Americans, looking for a way to feel better about themselves in the middle of the Great Depression. The story here is a fairly straightforward recap of a few months in Dillinger’s (Johnny Depp) life, how he and  his gang broke out of jail, twice (including gunsels played by Jason Clarke, Stephen Graham, Stephen Dorff, and Giovanni Ribisi), how he met and romanced Billie Frechette (Marion Cotillard), and how his gang robbed a series of banks in the American Midwest. At one point he was  making the FBI look bad and annoying the local organized crime lords who were switching to bookies and national gambling syndicates to make their money and were afraid of the heat that Dillinger was going to bring down on them. This is a 2-hour-20-minute movie that never bores, never slows. The pace is intense and there are lots of violent interludes, desperate men being riddled with bullets from the spit of ever-present Tommy guns.

Shooting over the shoulders of his actors, Mann and his DP Dante Spinotti creates these slashing, sudden close-ups, it gives the action sequences a shocking intensity. This high-def look was unusual at the time, especially in a period picture, but looks entirely modern and de rigueur now.

These moments stand out: Dillinger driving the car away from the jail he’s just busted out of, Pretty Boy Floyd (Channing Tatum), running into the apple orchard,  a dishonored cop alone in an interrogation room, with a hallway full of men  just outside the door. The final scenes of the film, taking place in the cinema and in the street outside, amazing moments where you know you’re in the grip of a master storyteller. 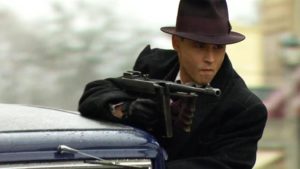 Depp plays Dillinger with a mix of cockiness and his own, undeniable movie star charisma. If he’s saddled with a little cheesy dialogue, you could argue it’s because his character was so in love with Hollywood and that roguish characters he saw on the silver screen, he was probably borrowing the dialogue from them… the Edward G Robinsons and Jimmy Cagneys and Clark Gables. 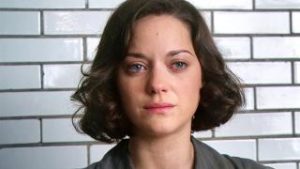 Cotillard is the heart of the movie, even as she disappears for chunks of time. As it goes along her understanding of the fleeting  nature of her romance with the famous gangster is what we latch onto as an audience. There is a reason Mann chose to linger on Myrna Loy in Manhattan Melodrama, the movie that’s playing in the cinema where Dillinger goes in the end.

As usual, a great supporting cast in a Michael Mann movie. He always fills his movies with cool tough-guy actors and  performers often found in other movies with bigger roles, but are clearly here to have a chance to work with this remarkable filmmaker, such as Channing Tatum, Lily Taylor, Carey Mulligan, and Leelee Sobieski, all of whom are only in the picture briefly. Christian Bale is a little flat in his role as G-Man Melvin Purvis who leads the efforts to capture Dillinger, but Billy Crudup as J Edgar Hoover manages a great 1930s cadence and enunciation in his lines. Watch for a Diana Krall cameo as, what else, a singer.

In the past I felt the film was maybe a little too much like Heat, the 1995 crime drama with Al Pacino and Robert DeNiro, which is considered by most to be Michael Mann’s masterpiece. Like that film, Public Enemies is never about good versus evil,  it’s about two similar forces in opposition, the cops and the crooks, coexisting and struggling for domination, with brutal tactics and sacrifices on both sides. Characters in both films are very present, not too concerned with backstories or ghosts of the past, nor do they tend to look too far ahead. They deal with the here and now, life and death. 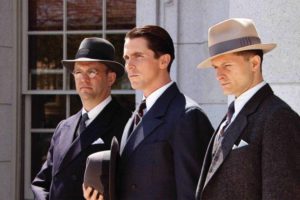 Watching it again, Public Enemies distinguishes itself by its doomed central love affair — Depp and Cotillard are especially good — and by the achievement in its visual storytelling. It’s something to see.