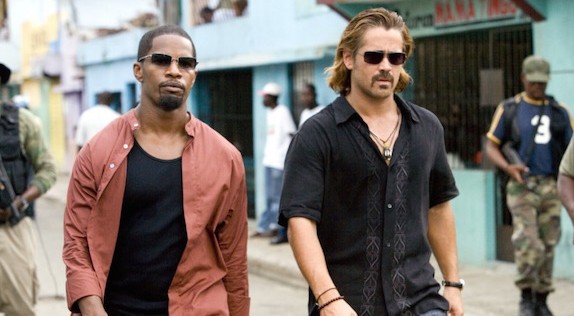 This is a semi-regular feature on FITI where I highlight an older film that doesn’t get much love but I believe is worth discovering… or rediscovering. 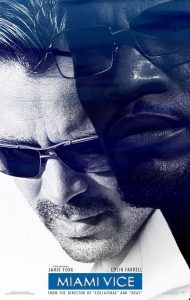 Written and directed by Michael Mann, based on the TV series by Mann and Anthony Yerkovich | 134 min | 2006

No one mentions Miami Vice. 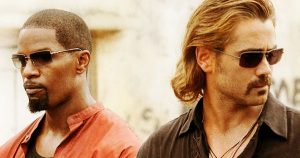 Miami Vice is part of a (sadly ongoing) wave of features adapting old TV series that audiences never ask for but Hollywood bean counters see as a way to make a buck. Most of these films are jokey, ironic takes on the original material, and none are as deadly serious as this is. Mann went back to his original series and cut out any suggestion of camp or ’80s pastel cheese. His Florida-set cop drama is a lean, mean, big-budget 21st Century thriller about committed law-enforcers who do not fuck around. It’s also about a deep respect (*cough* total homoerotic bromance *cough*) between two men, Sonny Crockett (Colin Farrell) and Ricardo Tubbs (Jamie Foxx).

But there’s more than that to qualify Miami Vice for ACOO—and I should couch the claim that I am the only cultist by admitting that a few cinephile friends and I got together to watch the film a couple weeks back and we very much enjoyed it. A cult of five? 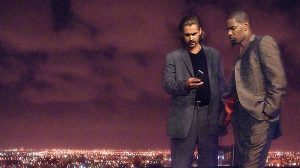 It’s a visual feast. Mann used Thomson Viper digital cameras to shoot the film. Reviewers will often use the cliche “the city is a character in the picture,” (and I’m sure I have), but thanks to these amazing cameras and the creativity DP Dion Beebe and Mann at work behind them, the south Florida sky is really the other character here — flecked with lightning and shades of purple and blue in the hours just before dawn. The cameras pick up the existing light in astonishing ways, and represent urban cityscapes with a grainy texture unique to Miami Vice.

How many films can you say have a distinct look unlike anything else… except maybe moments in other Michael Mann films. The world of the film — merciless drug cartels and their white supremacist partners moving massive quantities of product while earnest, fearless cops go deep undercover to stop them—is as much fun for its look and sound as it is for its plotting, adrenalized action sequences, and characters’ high-stakes brinksmanship.

The score is also worth talking about: somehow Mann uses tracks from Moby, Audioslave, Jay-Z/Linkin Park, Nina Simone, and Goldfrapp to create a unified and perfectly moody rock/electronica substrata that perfectly suits the look of the thing. 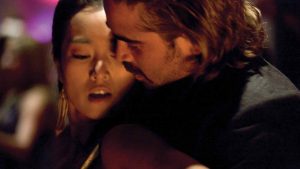 The entire picture is pitched at such a high level of masculine seriousness that any wrong step would send it careening into the ridiculous, and in that you can see how Christopher Nolan watched a lot of Michael Mann as inspiration for his Batman movies. The commitment to this tone is so complete you either buy in 100%, or it won’t work at all for you. I found it hardly a choice: Miami Vice sweeps you into its arms from that utterly immersive opening sequence in the nightclub — it begins the Theatrical Cut, my thoughts on the substandard Director’s Cut to follow below — where we get music and image, flashing lights, dancers, and then the anxious faces of the team of cops waiting for a deal to go down.

The inciting incident is a phone call from a desperate informant, Alonzo (the always powerful John Hawkes, even in a small role like this one), who’s been forced to rat out some of the good guys. It only earns him tragedy, but it draws Crockett and Tubbs into a deal with multiple law-enforcement organizations (including a stuffy FBI representative played  Ciaran Hinds) against a cartel led by a scary dude named Montoya (Luis Tosar), his partner in business and romance, Isabella (Gong Li), and right hand man, Jose Yero (John Ortiz).

The planes and go-fast boats speed far and wide, and before long we’re in Uruguay, Colombia, Haiti, going over Iguacu Falls, and sipping mojitos in Havana. Typically in a Mann joint, the action sequences are top notch, but duelling love stories here — between Crockett and Tubbs and between Crockett and Isabella, under the nose of her compatriots, gives the film its heat.

In many ways the reason Miami Vice is so good is because it’s as much a spy movie as it is a police thriller: These guys are living their lives on a bed of deceit, pretending to be other people while still managing to keep one eye on the truth and one eye on the women they purport to love.

There is a downside in all this tough-guy posturing: The cliched place of key female characters in the film. Too often Mann is like Scorcese in that way, telling  stories of men where too often women are only there to suffer and need rescuing. Two key female roles — Isabella and Naomie Harris’ Trudy — start on the level of equals with the men in their lives and business, but in the end become pawns. Only Elizabeth Rodriguez’s Gina provides a toughness and capability that’s consistent through the movie, the highlight of which is a terrific scene where she dispatches a neo-Nazi thug in a trailer park with a bullet to the head. 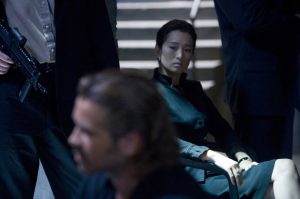 Mann is also a filmmaker who can’t leave it well enough alone. Given the chance to recut his films, he does — there’ve been at least three versions of Last Of The Mohicans available on disc, the original theatrical cut now lost in time.

With Miami Vice a disappointment at the box office, Mann’s “Director’s Cut” was the version most commonly available on Blu-Ray and DVD. Avoid it if you can: It adds interstitial moments to the film by puffing up a few scenes — that stuff is fine. But its cardinal crime is a new opening, starting in the daytime with a go-fast boat race. I can understand why he wanted to include the footage, but it brings little to the film beyond extending its running time, and denies us the pleasure of being thrown into film — sans opening credits — at the club. That opening immersion  inexorably sets the tone, and it shouldn’t have been messed with.