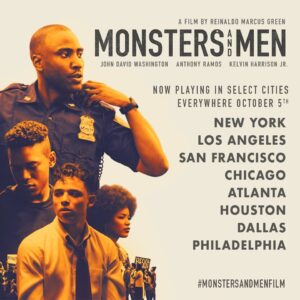 The first question I had while watching this impressive first feature from 2018, a film with solid performances, gorgeous cinematography, and a terrific cast, is this: Why hadn’t I heard of it before a couple weeks ago?

I don’t remember it on the festival circuit — though I’ve since learned it premiered at TIFF in 2018, where Drake, who serves as an executive producer on the film, was expected to intro it, but he bailed at the last minute. It certainly didn’t get a release in cinemas locally. It wasn’t part of the awards season conversation that year, though I think it’s probably worthy.

So, how did I miss it? Is it my not paying attention, or is it the vagaries of a production and distribution system that doesn’t forefront films with leads who are people of colour? 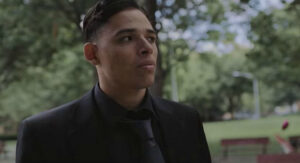 A cinematic triptych, Monsters And Men is above all ambitious, telling three overlapping stories set in the Bedford Stuyvesant neighbourhood in Brooklyn: Anthony Ramos as Manny, a young family man who videotapes the shooting of a black man on a street corner and has to decide whether to share it online, knowing it will bring him trouble. John David Washington is Dennis, who supports the actions of his fellow cops no matter what his wife says, and Kelvin Harrison Jr is Zyric, an up-and-coming baseball player who wants to get involved in activist causes. 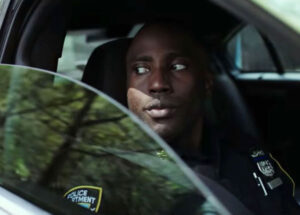 By choosing to focus on three leads rather than one, Green risks his film feeling shallow and episodic. It’s certainly not shallow, but it doesn’t entirely escape the sense this might be a promising pilot for an ongoing series we’ll never get to see, where the characters’ future interactions are both possible and plausible. Leaving us wanting more is a justifiable narrative choice, and the structural discipline is admirable, but in breaking the typical screenwriting rules it walks a line that some likely won’t appreciate. 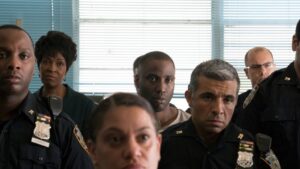 Full marks to the DP Patrick Scola. I’d wager Bed-Stuy’s never looked better. A shot of Manny with his child on a rooftop against a sunset looks like an insurance ad it’s so fetching, and the visual ease with which the story is told helps make its interlocking pieces fit.