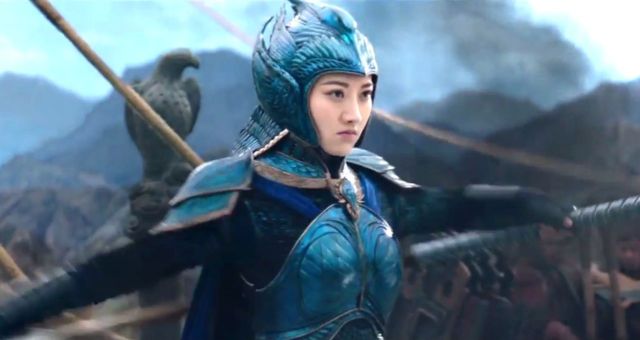 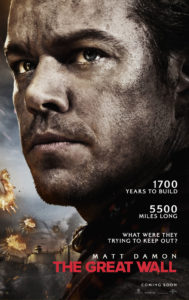 This fantasy blockbuster’s reputation precedes it: The most expensive film ever made in China, a co-production with Hollywood that chose Matt Damon to shore up its international prospects, but gave him both a Twitter-enflaming pony-tail and accusations of being the hero of a White Saviour narrative.

From the producer’s perspective, his appeal is obvious, and I can understand why he’d take the gig — Yimou Zhang is the filmmaker who made the elegant Hero and House of Flying Daggers. On the surface there are things to appreciate here in a semi-camp adventure about two mercenaries in Northern China (Damon’s William and Pablo Pascal’s Tovar) looking for gunpowder. They kill a prehistoric-looking giant lizard and subsequently join up with a well-armed and colour-coded Chinese force on the eponymous Wall, including the spear-wielding Commander Lin Mae (Tian Jing), who takes an interest in William. 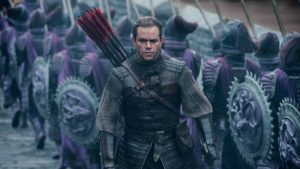 But will he help the cause, find a measure of personal honour and protect civilization from this hoard of semi-mystical lizard creatures, called the Tao Tei, or will he stick with the plan and take off with a barrel full of powder?

That isn’t really much of a question, is it?

The problem with The Great Wall is it has a pulpy, b-movie spirit but aspires to a classier sort of epic that it never gets close to. To make matters worse, the CGI is substandard throughout, turning what should be thrilling action sequences into video game interstitials. Too much hangs on the handsome production values, the impressive costumes, and shoddy, hole-filled plotting, while the critters are credited with smarts and strategy, but nothing like motivation. 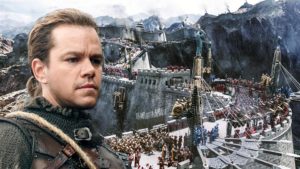 Damon never looks comfortable with either the pony-tail or the amorality, while the suggestion of Irish accent is established early then forgotten. Pascal is more fun, but this could’ve been a romp with a little more humour brought to bear.

And, yes, it does seem misguided that this high-concept Chinese story should be told through the eyes of a white Westerner, even if it turns out the Chinese teach him honour. Zwick and Herskovitz were also mostly responsible for The Last Samurai — I guess they’re the go-to team when you need a white dude saving Asian culture. 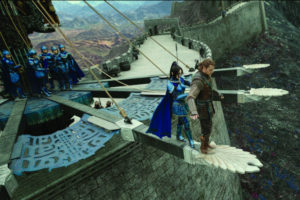 Interesting that despite the suggestion of sparks between William and Commander Lin Mae, they never go there. I suspect that’s another calculated decision — Hollywood and the Chinese movie industry can team up and spend a huge amount of money on a so-so blockbuster, but an onscreen interracial romance is off the table.