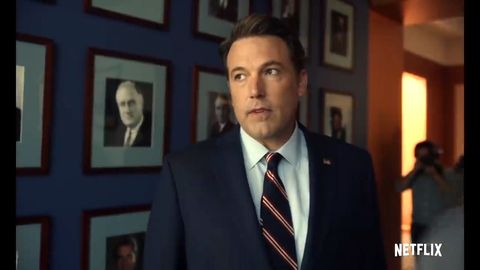 Directed by Dee Rees | Written by Rees and Marco Villalobos, from the book by Joan Didion | 115 min | Netflix 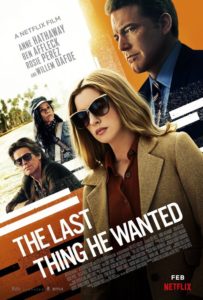 35 years ago, The Last Thing He Wanted wouldn’t have been an outlier. It would’ve joined other political dramas based on actual geopolitical events, stories of fictional journalists and innocents caught up in dodgy deals in Africa and Central America in movies like Salvador, Under Fire, and Missing. I have to applaud Netflix for investing in these weird little genre pieces, like  Triple Frontier and Red Sea Diving Resort — movies of a sort that have no right showing up in cinemas because nobody goes out to see them anymore, but they can live here online and maybe attract an audience, especially when headlined by stars like Anne Hathaway, Willem Dafoe, and Ben Affleck. 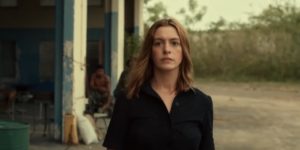 Funny thing is, despite its flaws, for most of its running time this movie is a lot better than, say, Serenity, also starring Hathaway, a weird fantasy that camped out in cinemas early last year. That, unfortunately, isn’t saying too much — while Rees is solid with actors, this and the overrated Mudbound showed her work as a writer-director has a ways to go.

Elena McMahon (Hathaway) is a hard-bitten muckraker on the Latin American desk of her American newsmagazine circa 1984 whose life changes when pressure from above prompts her editor to reassign her. The press plane following Ronald Reagan on the reelection trail is a poor fit, so when her father (Dafoe) asks her to help him with a little import-export job, delivering crates stuffed with M-16s to Nicaragua, she takes the gig — and sure enough, drugs await on the other end, all very Iran-Contra. 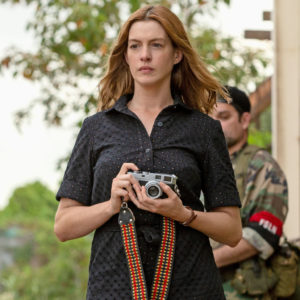 That’s when things get complicated, and Ellie finds herself in over her head — still acting like a journalist while dealing arms, relying on a colleague (Rosie Perez) for info from Stateside while parenting her little girl over the phone from a distance. All of this injects a welcome feminine perspective on what is too often a sausage party genre. Ellie’s desperate situation does manage to hold the interest — along with the expected conventions of evil Washington suits, sweaty functionaries, tropical locations, and occasional gun play. 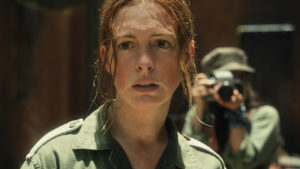 Hathaway wears this character like a tattoo — she does damaged-but-determined better than your average Amy Adams — but you can feel coherence in the script and direction start to slip about midway in. When Affleck’s spymaster crosses Ellie’s path in Antigua, offering this year’s most unlikely, sudden romantic pairing, the story goes off the rails. When Toby Jones appears in the third act, the whole affair as a lost cause. It’s a real shame because it started pretty well.