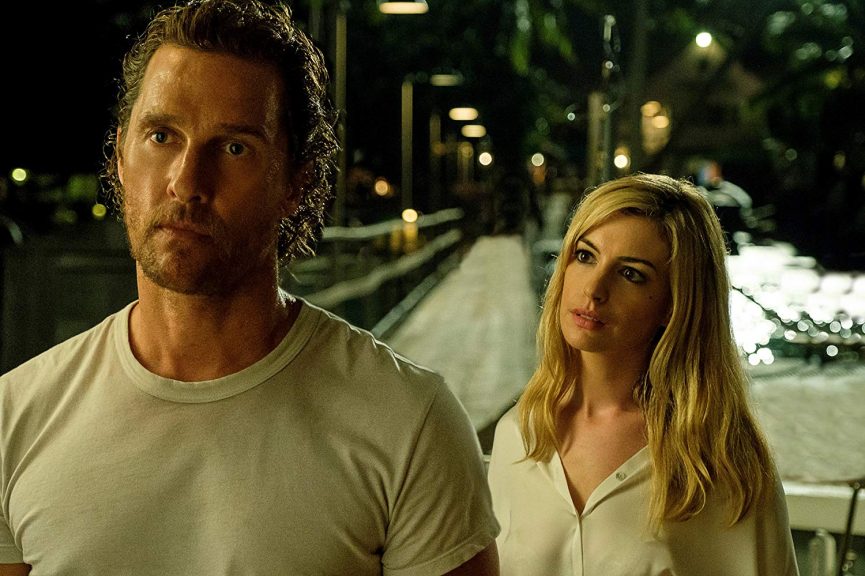 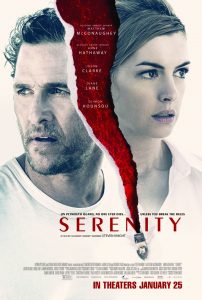 My co-host Stephen Cooke and I have been getting into the work of M. Night Shyamalan on our podcast, LENS ME YOUR EARS (Episode #74), where  I out myself as an apologist for the Philadelphia filmmaker. I have time for a storyteller as gifted as he is mixing realism and the fantastic, and his admission that he’s deeply inspired by Rod Serling’s The Twilight Zone. I’ve got time for the whole third-act twist, especially when it’s well-seeded earlier in the film and doesn’t capsize the drama, but adds to its overall worldview. 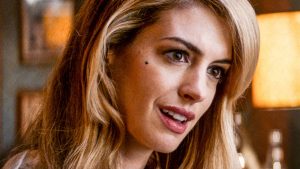 This brings us to Serenity, which comes with a doozy of a late-arriving twist, except this one is so off-the-wall bonkers, it feels like it was hatched from some other kind of film, entirely. It’s the kind of twist that makes audiences feel ripped-off. Maybe a working vacation in Mauritius, where Serenity was shot, was too attractive for all involved to say no to this deeply flawed script.

Whatever the reason, the movie’s a turkey. 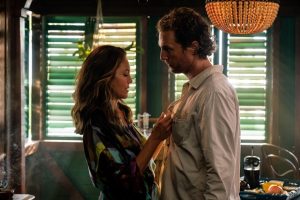 The torrent of disappointment in Serenity carries over to the filmmaker: Steven Knight has a gift for British crime thrillers, having written and sometimes directed quality, pulpy dramas such as Dirty Pretty Things, Eastern Promises, Redemption, and one of the best films of 2014, Locke. But it’s hard to see what he was going for here but for some deconstruction of noirish tropes that he never quite gets to. Instead, the plot and character particulars don’t make any sense with what’s revealed later on.

It starts promisingly enough: a sun-baked thriller in the style of Body Heat. Matthew McConaughey is Baker Dill, an Iraq veteran and sport fisherman who makes a living bringing wealthy tuna and shark fishers out on his boat (the “Serenity” of the title) on the tropical island of Plymouth, which must be somewhere off the Florida Keys given how much people talk about Miami. He’s obsessed with a catching a certain, specific fish, a tuna he’s named “Justice.” His friend and captain, Duke (Djimon Hounsou), thinks Baker’s priorities are a little off, and so do we since we’re never given a reason for his fish fanaticism. When the reserves get low, Baker gigolos for Constance (Diane Lane), and drinks at the island’s only bar. Karen (Anne Hathaway), Baker’s ex, shows up, telling stories of their son—introverted and video-game obsessed—and her new husband, Frank (Jason Clarke), a brutal, abusive asshole. She offers Baker a cool $10 million to take Frank out on his boat and drop him into the ocean for the sharks. 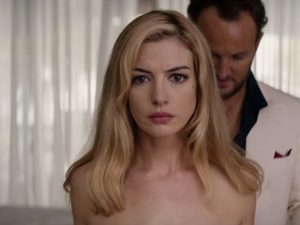 This is sweaty, pulpy noir, and so far, that’s fine. Hathaway makes an unconvincing blonde, but her commitment to the fatale makes up for a so-so dye job. McConaughey spends most of the film either soaked to the skin or shirtless—his movie-star charisma always worth watching. The core suspense comes from whether Baker is willing to kill a man who so clearly deserves to die horribly. To paraphrase Captain Willard, everyone wants him to do it—even the movie wants him dead.  And Clarke plays him as relentlessly evil—not his best work.

Then comes the twist, which, as previously mentioned, is so outrageous you wouldn’t believe it if I spoiled it. I won’t, in case you have a rubbernecker’s fascination with such things—no judgement here. The performers are attractive, but what an undercooked waste of interesting ingredients, otherwise.