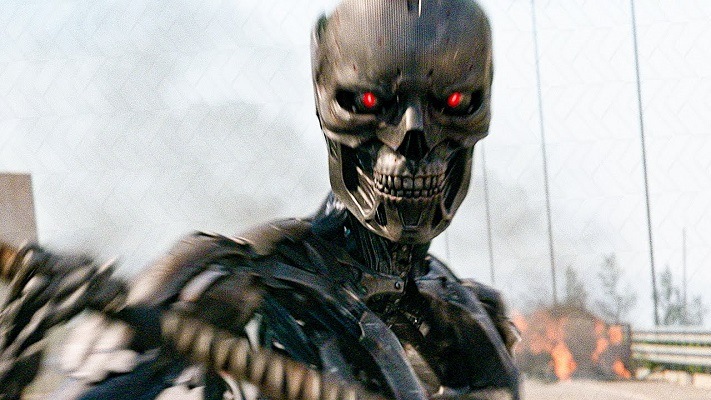 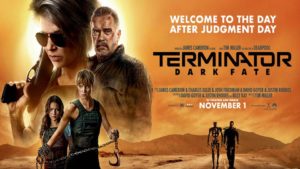 Here’s the accepted wisdom on this long-running killer robot movie series: The first two films by James Cameron are science-fiction and action-movie classics, but the following three movies, spread over almost 20 years, have driven a once fascinating concept into the dust—go here for my look back at them.

Two names in the creative team helped brew hype for this newest sequel. The first is Jim Cameron, who doesn’t direct—too busy with multiple Avatar sequels—but he produces and has a hand in the script. The other name is Linda Hamilton, returning for the first time since 1991’s Terminator 2: Judgement Day. That’s especially good news, because she was the beating heart of the first two pictures.

So, ignore the past three features, and any of their alterations to the mythology. For all intents and purposes, this is Terminator 3, arriving 28 years after the previous film. 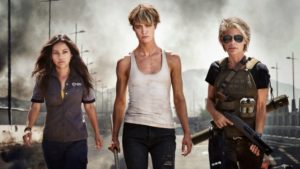 The story this time focuses on Dani (Natalia Reyes), who lives with her father and brother in Mexico City. One morning at the automobile assembly plant where she works, just as she’s informed her brother’s job will be replaced by a machine, she’s attacked by a man (Gabriel Luna) made of black metal who can take the identity of anyone he touches—he’s a Terminator from the future, a mix of the original T-800 model and the T-1000 liquid metal version. But she has a protector: Grace (Mackenzie Davis), who claims to also be from the future, and she has special skills and bionic augmentations. But the new Terminator is indomitable and the humans barely escape with the help of Sarah Connor (Hamilton), who shows up armed to the teeth.

What follows is what I call a stealth reboot—serving many of the same themes and action beats of the earlier movies under the guise of a sequel,  with (a few) new cast members and updated special effects. It’s an effort to reheat what we liked about the admired films by giving it to us again, engineered just enough to feel fresh.

The movie fails in its efforts. It’s calculated, it’s repetitious, and about as appetizing as a TV dinner from the 1980s. 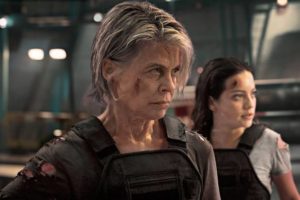 I have to ask—why do future rogue AIs keep using time travel to solve their problems? And because this new future has been changed due to the events in the first two movies, it never saw a Skynet—how did it develop this time travel technology, and why? And how did both the robots and the humans get access to it? Maybe the filmmakers figure we’ve been pummelled so often by this mythology we no longer care to have the basics explained. It’s a mistake to assume a shoddy copy of what worked before will work again.

You can see where they tried to update the material—three women in the middle of one of these movies forefronts a worthwhile feminist perspective. Reyes, Hamilton, and especially Davis, acquit themselves well enough despite frequently clunky dialogue and ropey plotting. But the movie around them misses the boat on so many opportunities to be genuinely fun.

There’s only one thing that makes Dani’s story different from Sarah Connor’s, and it isn’t enough to distinguish her beyond a late-arriving political point. She seems strangely OK to go along for the first act and much of the second not knowing why she’s being hunted, or why Grace is there to help her—the script doesn’t do nearly enough to allow for her lack of curiosity about why her life is being destroyed. 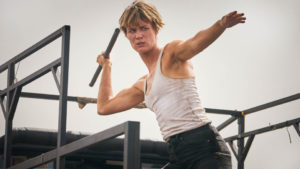 Davis plays Grace as someone who’s sacrificed mightily in her mission—she’s become part machine in order to fight the enemy. What’s that done to her humanity? This movie doesn’t care. And while it’s great to see Hamilton as Sarah Connor again, she has no real arc—she’s more or less the same embittered fighter at the film’s beginning that she is at the end.

Meanwhile, the protagonist, Luna’s Rev-9 Terminator, is a blank elemental force. This may as well be a disaster movie for all the personality he brings to the role.

The movie’s biggest problem is that Tim Miller is no James Cameron. (Though who is? So few filmmakers have his kinetic gifts.) The action sequences here are anonymous, hard-to-follow CGI storms. At one point a military cargo plane is rammed by another jet and torn apart, with a humvee ejected from its rear end held aloft by parachutes before falling into a rushing river… and yet I was bored. Naturally, the crashing plane(s) and humvee careen toward a hydroelectric dam, and I was briefly amused by how much it reminded me of one of my favourite Calvin & Hobbes strips. (“His eye twitched involuntarily.”) 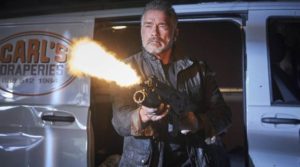 Arnold Schwarzenegger’s T-800 does eventually appear about an hour into the picture, but his part in all this is worse than shoehorned, it’s silly. It’s an excuse to have a senior citizen robot walking around, and while he’s given some of the best lines in the movie—including a killer gag about Texas—it’s not nearly enough to raise the film above the mediocre. There are moments, like in a detention centre at the Mexican-American border, that are both a throwback to the future apocalyptic visions of the early movies, as well as  being very now, but they feel more like window-dressing than any real commentary on how society is moving toward a dehumanized authoritarian regime.

Hopefully, as the red, glowing eyes fade in the explosions and flame we expect at the end of all Terminator movies, our future will arrive with no one sending another killer machine back in time to bother us.