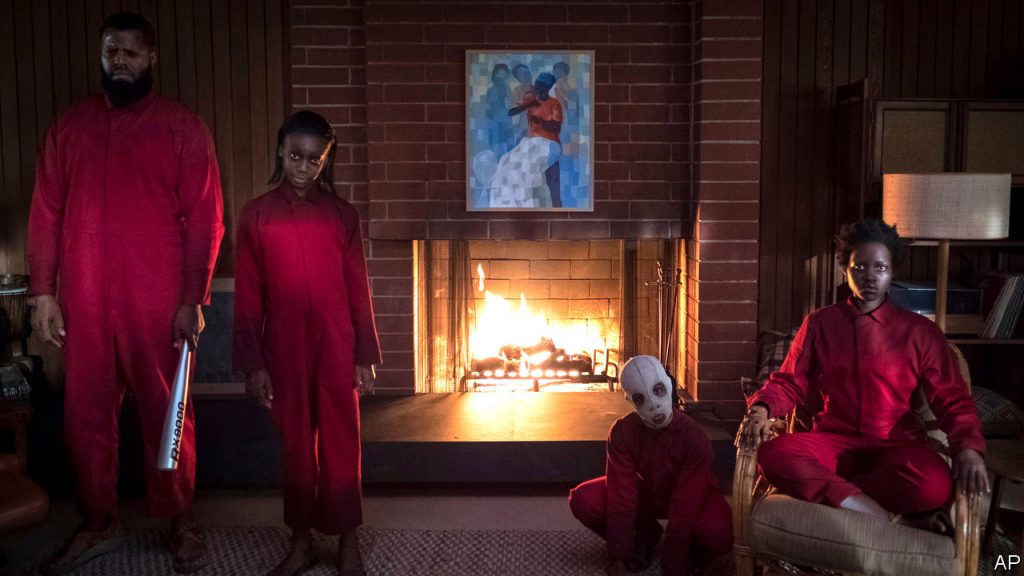 Written and Directed by Jordan Peele | 116 min | Netflix, On Demand 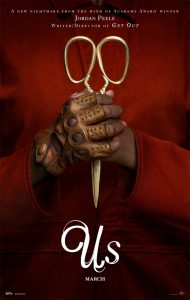 The unexpected commercial and critical success of Jordan Peele’s first feature—Get Out, which earned him an Academy Award for screenwriting—means his follow-up is garnering a lot of attention. What he’s delivered is another ambitious genre film, though a much more straight-ahead horror than the last. The biggest difference with the new work is Peele doesn’t quite stick the landing. 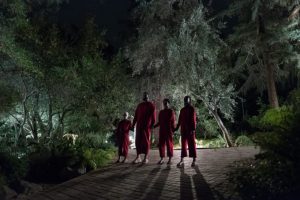 In the pre-credit sequence we’re introduced to a young girl at a summer night funfair in 1986. She walks away from her parents and sees something strange, something she can’t explain. In the present day, she’s grown up to be Adelaide (Lupita Nyong’o), married to Gabe (Winston Duke), with two kids, teen Zora (Shahadi Wright Joseph) and pre-teen Jason (Evan Alex). They’re on vacation to a summer house in Santa Cruz, and generally seem pretty happy about it, though Adelaide is a little anxious about going to the beach. When they meet up with a somewhat wealthier couple they know, Kitty and Tyler (Elizabeth Moss and Tim Heidecker), and their twin girls (Cali and Noelle Sheldon), near where Adelaide had her weird experience as a child, Adelaide’s paranoia starts to manifest. 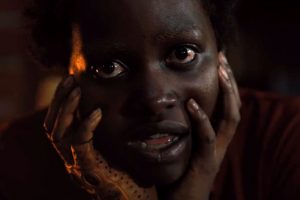 Of course, she’s right to be concerned about this place and its weird old House of Mirrors that’s remained completely unchanged in 30 years. The perpetual shack is only the start of an exercise in plausibility stretching, putting Peele very much in the M. Night Shyamalan camp, with whom Peele shares a cinematographer. That’s not necessarily a dig—I’m a longtime Shyamalan apologist—but it gives you a sense of what kind of universe Us is set in. 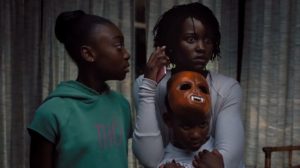 Peele drills into the American psyche here, but this time instead of race, he’s taking shots at class, capitalism, and materialism—the weakness in America is inside us, the U.S.. Get it?  There are a few chucklesome barbs at his targets, like an easily confused living room AI and its music choices, for example, but it’s a thin layer of meaning under the scares. That leaves the basic genre tropes—the family must face psychopathic and vengeful duplicates—to keep the interest, until the reason behind it all is revealed.

And when that reason arrives, it clunks—the explanation of how these duplicates came to be is entirely half-baked. As he showed in Get Out, Peele isn’t shy about laying a foundation of weird science-fiction to support his high-concept creepfest, but in Us it’s not nearly enough to support the broad allegory. 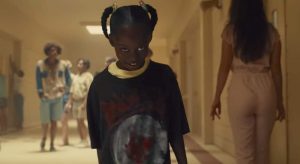 It’s a testament to Peele’s burgeoning skill as a filmmaker that, despite the deficit of internal logic, most of the movie still works. It’s got a score, lighting, and sound cues that help sustain suspense through a wire-taut second act, where the family does battle with their evil doppelgängers and faces other surprises I won’t spoil. It delivers a shot directly to the audience’s subconscious that lingers beyond the running time. 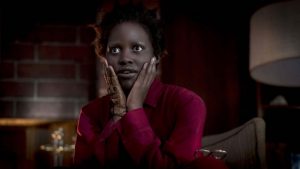 Moss isn’t in it for long, but she really knows how to capitalize on her close-up, and Nyong’o and Duke are especially good in their (dual) roles, with Duke bringing much welcome humour while Nyong’o delivers the wide-eyed terror (and raspy-voiced intensity) these peculiar circumstances demand.