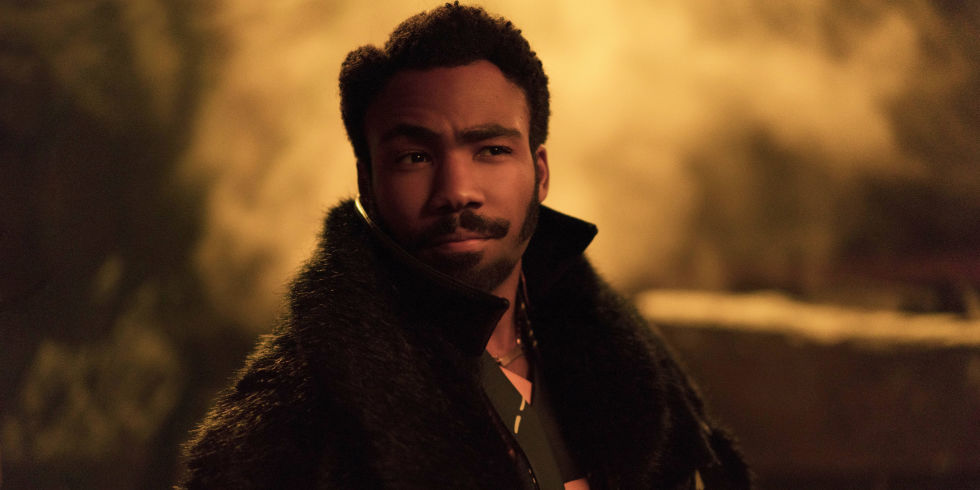 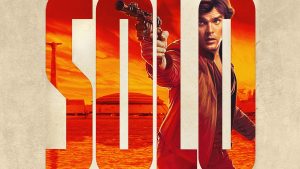 The relaunch of the Star Wars cinematic universe has come with more than its fair share of behind-the-scenes drama. This film is no exception, with Phil Lord and Christopher Miller kicked off the project and veteran helmer Ron Howard brought on board to fix whatever was wrong. The reasons for the directorial change remain a little mysterious, especially since Howard has said he didn’t alter a line in the shooting script.

The resulting movie has memorable characters, but otherwise is absent much of a thrill. I was surprised at how rote and uninspired it feels. Gareth Edwards’ prequel Rogue One wasn’t perfect but it took risks. Rian Johnson’s The Last Jedi, was similarly flawed, but also took narrative chance, showing some authorial style. Solo is premasticated and safe. This is more fan fiction that fails to convince of its need to exist, and in places commits the deadliest sin of summer blockbusters: being boring. 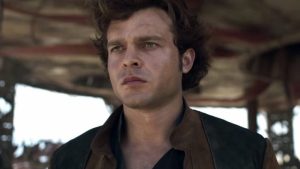 It’s the origin story of Han Solo (Alden Ehrenreich ), the rakish freebooter of the Star Wars universe, the guy who in the person of Harrison Ford brought a much-needed adult edge to the original trilogy. Here he’s something of a kid himself, with more in common with the young Luke Skywalker than with the Corellian we know—boasting about his piloting skills and desperate to get a ship so he can get back to his (platonic?) sweetheart, Qi’ra (Emilia Clarke), who he’s separated from in his efforts to escape his cruddy homeworld.

He signs up with a group of thieves—including Woody Harrelson and Thandie Newton—who’re being paid by a gangster (Paul Bettany) to steal valuable, if volatile, space fuel. From there it gets a little more complicated—lots of crosses and double-crosses—and brings in other welcome figures from the original trilogy, Chewbacca the Wookie (Joonas Suotamo) and Lando Calrissian (Donald Glover), as well as Lando’s droid L3-37 (voiced by Phoebe Waller-Bridge, the brilliant mind behind the TV series Fleabag and Killing Eve), who’s had enough of droids being second-class citizens to every other organism in the galaxy. 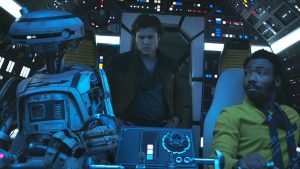 The heist-heavy plot is maybe the best thing about this picture—it moves the characters around deftly, keeping us guessing on motivations and alliances. But Howard, who has a few good movies (Rush, Splash) and a lot of stinkers (the Dan Brown series) in his filmography, directs this movie with barely a stylistic pulse, piling one generic action set-piece on top of the other.

It improves as it goes into the third act, but if the director can’t inject real excitement into a scene of Tie-Fighters attacking the Millennium Falcon, what is he even doing here? A sense of fun, and of awe, is frequently and painfully absent, as is a decent score—Johnny Williams, you are missed. This is also the worst-looking Star Wars movie to date, with whole sequences taking place in cold, drab, and underlit spaces (and space), and at two-hours-and-15-minutes, it’s easily a half-hour too long. 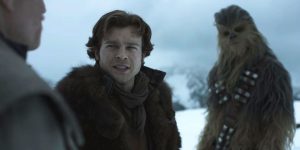 Alden Ehrenreich is a better Harrison Ford stand-in than you might expect, with charm and winning smile, but he’s never quite comfortable front and centre, instead surrounded by colourful performers who constantly steal the spotlight away from him. Harrelson, Clarke, and especially the volcanic talent that is Donald Glover, all wield charisma that simply outshines Ehrenreich’s low-key presence.

He’s also left dangling by a script that refuses to give him any of the good lines. It’s almost as though the father-son team, the Kasdans, who wrote the thing, are afraid to make Solo unlikeable, and instead have turned him into a friendly optimist. I don’t know if you remember this particular space pirate, but he was a pessimist to his bones. As a younger man maybe he was cocky, maybe he was obnoxious, but you’ll never convince me he was ever cheery. 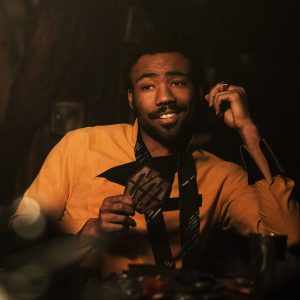 It’s no mistake all the pre-release hype around this movie has featured Glover almost entirely.