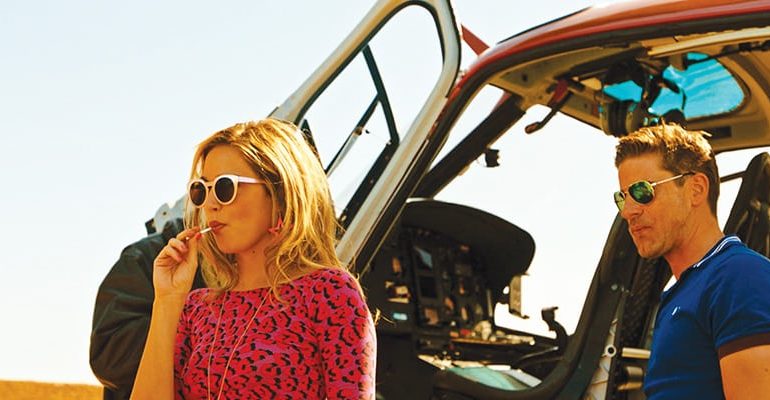 Written and Directed by Coralie Fargeat | 108 min | on iTunes 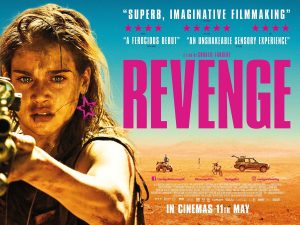 This French-sploitation actioner is getting a lot of love from the critics, and I can see why: It’s unusual and praise-worthy for a female filmmaker to take on this (unfortunately) predominantly masculine genre, the revenge picture, and give it a potent, stylish kick, especially for her first time as a feature filmmaker. I liked it, but I also recognize that just because it’s a woman calling the shots doesn’t automatically raise it above the rape exploitation cinema that inspired it—including pictures like I Spit On Your Grave, Thriller – A Cruel Picture, or even Death Wish—but it certainly can stand amongst the best of them. 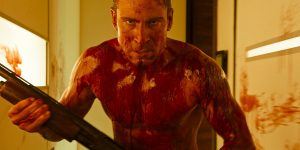 One way Revenge distinguishes itself in the set-up: Jen (Matilda Lutz) joins her married lover, Richard (Kevin Janssens), at a villa in some unnamed desert for a naughty weekend. As she decorates the place with her bikini-clad form, Fargeat dares us to judge her or consider her the way we might have in other films from this violent subset. In a lesser picture, Jen would be a victim of her own allure, dead before act two, and the boyfriend would be the one seeking justice. Not so here: When Richard’s buddies (Vincent Columbe, Guillaume Bouchede) show up early to join him on a desert hunt, things go very, very wrong, but Jen is left alive. 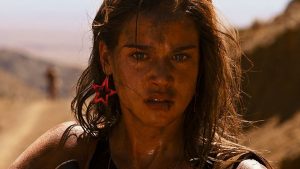 By the middle of the second act it’s clear Fargeat doesn’t care much for realism, given the way certain characters continue to function after terrible, otherwise fatal wounds, and the sheer gushing volume of blood painting the desert. But with that uneasy, unlikely relationship to realism, and a terrific visuals, comes a bigger picture. There’s something  mythical about it, as if it’s sprung from Norse or Greek Myth. If Jen is an avenging angel, a blood-soaked superhero, the film makes a lot more sense.

And when the bat-shit insane conclusion finally lands, we understand fully that this world runs by  its own rules.