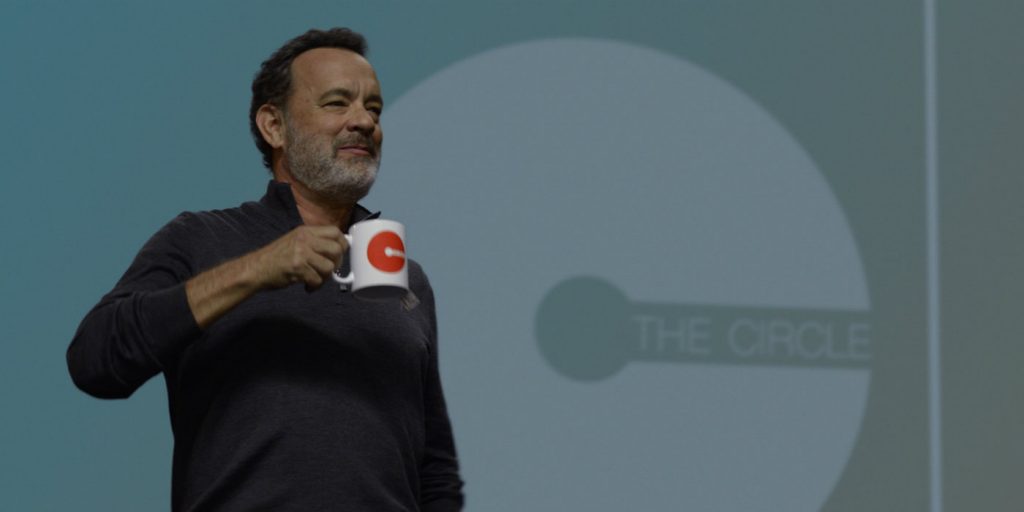 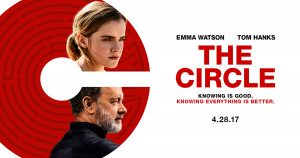 Mae (Emma Watson) is an American Girl living somewhere in America… probably California. She drives a crappy car, has a crappy job, but a cute boy, Mercer (Ellar Coltrane, of Boyhood), who builds deer antler chandeliers in his spare time, moons over her.  She doesn’t seem terribly interested in him, but then she’s not interested in much. She’s remarkably personality-free, you could say. She does care about her parents (Glenne Headly and Bill Paxton), and is concerned about Dad’s health—he has MS.

But then her glamorous Scottish friend Annie (Karen Gillan) gets her a gig at the company where she works, The Circle, a massive Facebook/Google-esque joint with a ubiquitous social media arm and a bunch of other high-tech ware in the offing. Soon Mae is spending all her time on “campus” and going to product launches hosted by the guy in charge, Eamon Bailey (Tom Hanks), and his aide-de-camp Stenton (Patton Oswalt), who has at least one great moment toward the end—he scowls like the James Bond villain he really wanted to be in this. 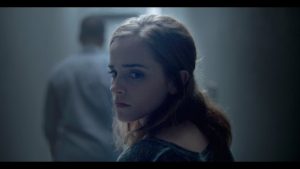 The culture at this social media giant feels pretty cultish, and Bailey’s hard sell of a tiny, portable camera he’s invented totally ignores the apparent privacy issues. The way Mae squinches up her face seems to indicate she’s not buying his patter—she even makes a joke to the mysterious hunky dude floating around campus, Ty (John Boyega), about “drinking the Kool-Aid.”

But then, about mid-movie, Mae has a life-altering experience and a psychotic break. There’s no other way to describe how she becomes a totally different person, utterly buying into The Circle’s community pact—”secrets are lies”—and living her whole life online.

For a few moments the movie looks like it might have a thought or two in its fuzzy head. It leans in to being a satire—some of The Circle’s ideas of social utopia through media are outrageous enough to seem satirical—but what the picture is really aiming for is tech thriller territory. It’s aiming for a gripping tale of personal responsibility versus fame and exposure in the information age.

Unfortunately, it can’t find a thrill with both hands. Rarely have I seen a movie with this much assembled talent totally flub it in so many categories. Ponsoldt has written and directed a rough-looking, plot-challenged, tonally askew disaster, suffering from the glazed inertia of many an international co-production, usually the product of a committee-based filmmaking approach. Ponsoldt—director of quality indies Smashed and The Spectacular Now—has shown style and smarts in his earlier work that elude him here. 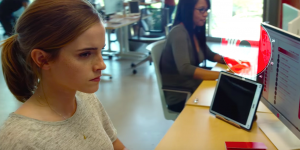 The narrative regularly eschews logic, characters are painfully underwritten—why Hanks chose to be here I’ll never understand—and Emma Watson is just terrible. It doesn’t help that Mae is so painfully undefined, but the actor brings nothing to increase our interest. Given that she and Coltrane both grew up on camera, you’d expect their casting might provide some pizzaz, but it’s amateur hour in their scenes together.  The threads of other subplots—Bailey and Stenton’s possible secret plans, Annie’s true role in the company, Mae’s parents’ relying on their daughter’s benefits a possibly complicating factor—are all set up and abandoned.

It makes you wonder why Hollywood—and its pretenders—are so ham-fisted with these anxiety-driven dramas of the internet. It’s more than the fact people looking at screens is inherently un-cinematic. It’s like they’re too close to the issue to really see it, and then they forget basic rules of quality storytelling.