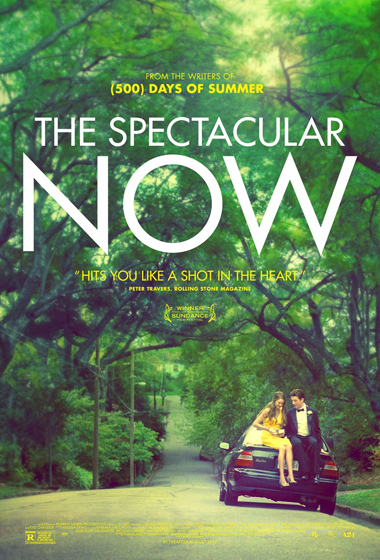 The Spectacular Now manages a very difficult trick: it quietly shifts its tone without selling out or undercutting the way it starts or how it ends. It’s a teen coming-of-age movie that begins lightly and gets heavy, but at no time does it feel inauthentic. In its own, unassuming way, it impresses.

A lot of credit can be laid at the feet of its lead: Miles Teller. He doesn’t breathe a false breath as Sutter, the class clown at his Georgia high school. He’s a teenager a bit adrift, to where it’s a point of pride, or at least a part of the shell he wears. He likes to have a good time, and is smart, confident and funny enough to ride along for as far as it will carry him. Problem is, he’s about to graduate from high school. Real life and real decisions await. And there are obstacles: he has a steady job in retail (with boss Bob Odenkirk), but one without a future. Maybe that’s OK, if he keeps living in that titular now. His mother (Jennifer Jason Leigh) won’t tell him much about his father (Kyle Chandler), who’s been out of his life for years. His sister, Holly (Mary Elizabeth Winstead, who was in Ponsoldt’s Smashed), married to a lawyer, isn’t much help, either.

To make matters worse he’s just been dumped by his girlfriend, Cassidy (the delightful Brie Larson, who seems to be everywhere right now). She immediately starts dating a sensitive jock. To get back at her, or maybe just to distract himself, he starts sweet-talking a smart and less-popular girl, Aimee Finecky (Shailene Woodley, also giving a perfectly modulated performance), who, it turns out, has her own parental issues.

This is where it goes from breezy to a dark. Teller is so true to this character, and his smiley face, like a rounder teen Elvis, is so genuinely likeable, the film’s suspense is largely built around hoping he gets his act together and doesn’t screw up, hurt himself or someone he loves. His appeal is a lot like John Cusack in his early stardom. But Sutter’s not all that good a guy; it’s easy to see how he manipulates Aimee—while never quite letting go of Cassidy via text messages—even as it begins to look like Aimee might save Sutter from himself. And his bad influence on her might swing it the other way, too. He’s never without his handy flask of booze, though the film is too sophisticated to fall into a trap of being a preachy after-school special on the dangers of alcoholism. Sutter self-medicates because he feels lost at his core, not the other way around.

Ponsoldt and his collaborators have done something special here, a small, indie gem of early adulthood with a sense of autobiographical honesty in the material.