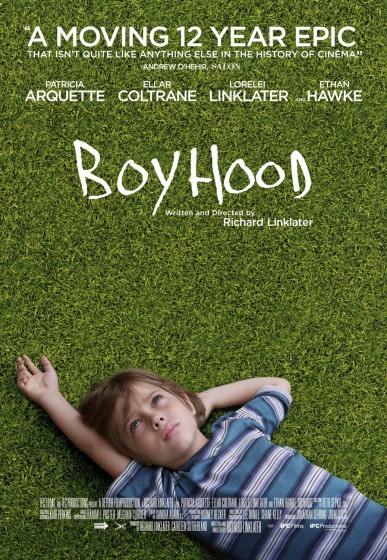 Written and directed by Richard Linklater

In December of this year when people like me consider the stand-out feature films of the past 12 months, Boyhood will distinguish itself from the pack for one undeniable reason: it took 12 years to make.

Starting back in the GW Bush era, Linklater gathered a small cast together in his home state of Texas  to shoot the first scenes of a family drama. Patricia Arquette and Ethan Hawke are Mom and Dad, with Ellar Coltrane  (b. August 1994), as the son, Mason, who we meet in first grade. The writer-director’s own daughter, Lorelei (b. May 1994), is the elder sister, Samantha. Every year since he’s put his actors together again to continue the story, right through 2013 when Mason graduates high school.

The tale, especially early on, is told from Mason’s perspective. As a little boy he rides his bike with his friends, does some spray painting under a bridge and gets a thrill from the ladies underwear section of the Sears catalogue. Dad and Mom are divorced with Mom taking on the primary caregiver role. They have to move to another town so Mom can go back to school. Mason and Samantha are naturally annoyed by the change. Dad drops in and out of the picture, offering lots of life advice but not much else—certainly not much of a positive example.

And so it goes. For 165 minutes we see the radical changes in Mason and Sam as they grow up on screen. Sometimes the changes are subtle—scenes shift and aside from a new haircut you might not immediately realize time has passed. But taken cumulatively, the film reaches an epic scope, one where the mundane details of life collected provide some kind of larger understanding.

Linklater, who along with John Sayles and Terrence Malick, is one of the great humanist American directors working. He’s done something a little like this before. With Before Sunrise, Before Sunset and last year’s Before Midnight, he revisited the same fictional couple over 18 years, where the real-time breaks between the films were mirrored in the characters’ lives. I compared those films to Michael Apted’s Up Series of documentaries—where every seven years the filmmakers revisit the same group of people—but Boyhood feels even more like Apted’s non-fiction in that the changes are so dramatic because the lead characters are so young.

That said, the movie’s plot isn’t exactly littered with dramatic event. Mom’s knack for choosing assholes to partner with is problematic, but she still manages to raise a pair of good kids. Dad continues to come and go, eventually settling down and committing to a new family in a way he wasn’t able to in his youth. Music, technology, and world events are cued up to help us identify the year we’re in, making for a playful subtext to the drama—Boyhood regularly draws attention to the fact it’s a project assembled over a long period. Time becomes a character in the story.

Which prompts the question: Is Boyhood just a formalist exercise? Is it interesting only because of how it was made? How involving would it have been if it was shot in six weeks last summer, with Mason and Samantha played by three or four young actors, recast as necessary to indicate the passage of time?

It may be a discussion worth having. The LA Times’ Kenneth Turan suggested as much, even going so far as to call Boyhood a gimmick, which ended up making him feel very lonely. Poor guy.

While I’m not personally bothered by the loneliness of the long running reviewer, I don’t think I’m gonna join Kenneth in his camp. If Boyhood is just a trick, it’s an extraordinary one.