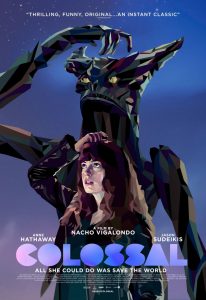 It may not make you feel as awkward or uncomfortable as, say, The Lobster or Swiss Army Man, two of 2016’s most singular features—delightful in at least their resistance to easy categorization—but Colossal is the first of this year’s indie films to reach for righteous individuality, and deserves to be celebrated for that. And more.

It tells the story of Gloria (Anne Hathaway), an alcoholic writer who moves from New York back home to her small town when her boyfriend (the ubiquitous Dan Stevens) accuses her of being “a mess” and throws her out of the apartment. Back on familiar turf, her home is empty. No family, no friends she’s kept in touch with. If this is her plan, to get her head together, it seems half-baked. The first thing she does is buy an inflatable mattress to sleep on. 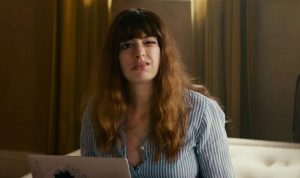 But Oscar (Jason Sudeikis), a guy with whom she was in grade school, recognizes her on the street and lends her a hand—bringing her a TV and a couch. He offers her a job at his bar. He seems like a sweet guy who’s maybe carrying a torch for her from the old days, and for a minute Colossal looks to be turning a corner into romcom territory—one with a subplot about a kaiju stomping all over Seoul. 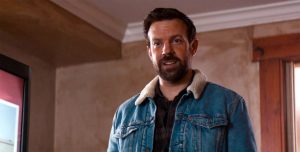 Beyond that I’ll let the film reveal its surprises, because the turns the script takes are not in a direction that genre would point to. This is wonderfully unpredictable storytelling, and that’s much to the credit of its writer/director Vigalondo, who a few years back gave the world the twisted Spanish sci-fi thriller Timecrimes.

If Colossal has a flaw, it’s that by dancing around these various styles—comedy, drama, romance, giant monsters—it shimmies across its themes rather than dig deeply in them. I’d venture it all has something to do with abusive relationships, as well the ways we tend to abuse ourselves and ignore our problems with drugs and alcohol, though I’ll hear other perspectives if you have a theory.

Either way the film is largely a joy, with big props to its performers. Hathaway and Sudeikis are especially good—I was reminded fondly of Hathaway at her raw best in Rachel Getting Married, a character not too far a cry from Gloria. And Sudeikis has previously ridden on his semi-smarmy charm to the detriment of a drama—I’m thinking of Tumbledown here—but in Colossal he finds all the nuance the part needs, and then some. And credit to Austin Stowell and Tim Blake Nelson offering shaggy support. 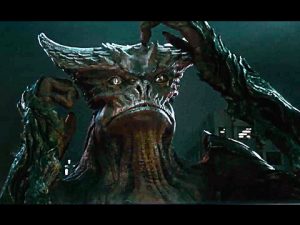