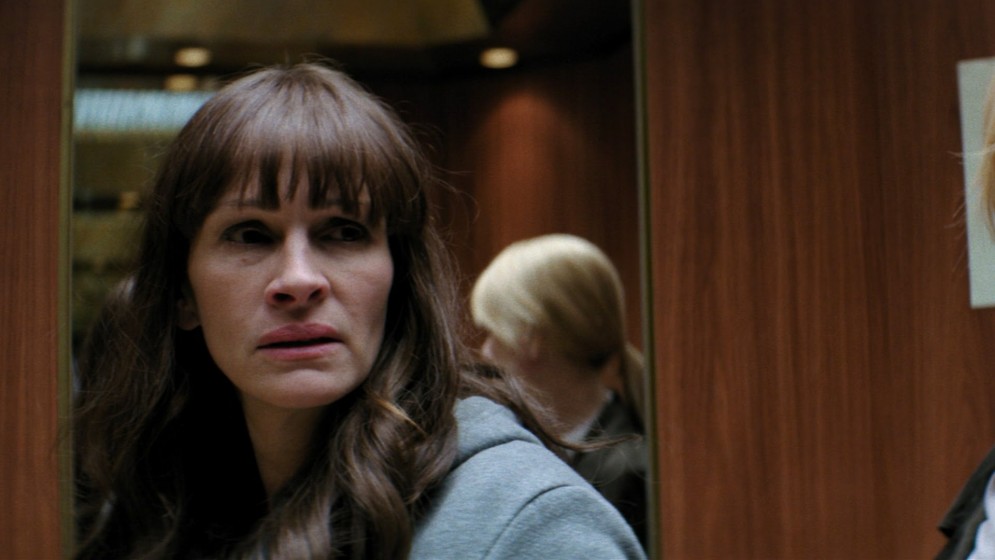 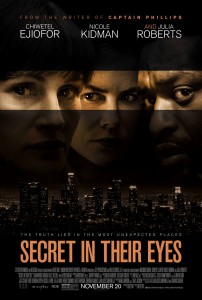 A warning: Foreknowledge of the Argentine Oscar-winning drama may diminish one’s appreciation of this Hollywood remake. But those who have seen the original—here absent the title’s definitive article, but otherwise very much the same story—may find some satisfaction in seeing what Billy Ray (Shattered Glass) chose to stick with and what he chose to alter.

For starters on the front of change, the twisty plot, straddling two time periods, nicely utilizes post-9/11 anxiety rather than the shaky revolutionary politics of 1970s Argentina, and a key role is gender-switched and allowed more narrative connective tissue to the other characters. 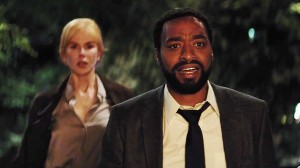 Ray (Chiwetel Ejiofor, empathetic as always), a former lawman who once worked for the LA District Attorney, diligently chases down a cold case, trying to track the man who murdered the daughter of a colleague, Jess (Julia Roberts). He’s also carrying a torch for  the new DA, Claire (Nicole Kidman). We repeatedly flash back to 2002 when the crime was committed, spending time with other key players in this drama—reliable character performers Dean Norris, Joe Cole, Michael Kelly, and Alfred Molina.

The deft control of tone in the original film allowed mordant character humour to support the compelling procedural. The remake doesn’t have that kind of versatility. The melancholy thread of deferred romance is also less pronounced here, maybe because Ejiofor and Kidman lack the required chemistry. More likely it’s because the writing around Kidman, and her performance, with the exception of a single interrogation scene, is anemic. And the final twist, altered in the remake to give Ejiofor’s character more complicity, doesn’t hit hard enough.

But credit to Billy Ray for managing to recapture the overall spirit of unease from the original story if not all its emotional shades. And kudos to Roberts for her intensity, shelving any vanity she might have had for a role where she spends much of the running time looking like she was hit by a truck.