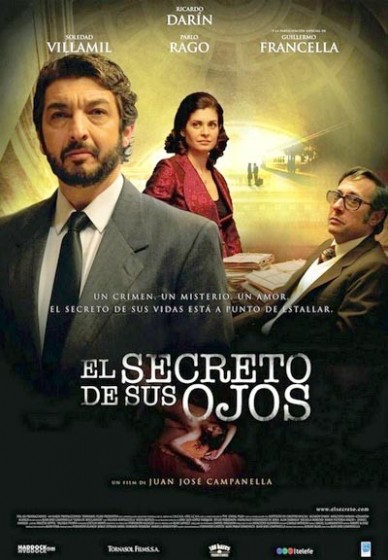 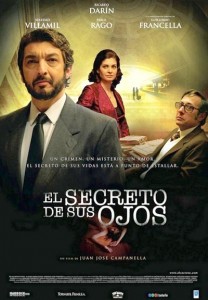 Buenos Aires 1974: Benjamin Esposito (Ricardo Darin) is a federal agent assigned to a murder case. A 23-year-old woman, a recent bride, is raped and murdered in her home. Esposito, with the help of his colleague Sandoval (Guillermo Francella) starts to investigate, but with no leads but the fact the door wasn’t forced, figures the killer is someone the woman knew. Inspired by the evident love and heartbreak of the widowed husband, he swears he’ll find the killer. He looks at photographs of the victim, and forms a theory by the way one old friend of hers looks at her admiringly.

We flash to the future, 20 years later. Esposito is retired, and using the two-decade-old murder case as a source for a novel. He visits a former colleague of his who is now a judge, Irene Menéndez-Hastings (Soledad Villamil), to help jog the memory and get feedback on his story ideas. It’s clear they have unresolved feelings for each other, and admit they’ve never spoken about the case in the intervening years.

We flash back and forth as Campanella deftly tells the tale of the murder, a juicy procedural unfolding in two time periods. It’s gripping even in the wildly implausible way that Esposito figures out who the murderer is, and how Menéndez-Hastings provokes the man in question to confess. It’s all a bit outrageous, but maybe no more so than in The Girl With The Dragon Tattoo, when a key clue to the identity of the killer is taken from a decades-old crowd photo of the victim looking at “someone who frightens her” who is off camera.

In fact, next to the Swedish film, this Argentinian winner of the 2010 Academy Award for Best Foreign Language Film, The Secret in Their Eyes, is as compulsive a crime drama that came out in the past year. The performances are key, especially the two leads, Darin and Villamil. Their chemistry fires the entire project. A few key scenes are some of the years’ best, such as when Esposito and Menéndez-Hastings share an elevator ride with the murderer, released to freedom due to a vindictive colleague. There’s also a bravura long take when the killer is captured, where the camera swoops uninterrupted into a soccer stadium and tracks the man through the crowd.

So, yes, there are some elements that are far-fetched, but the grace of the filmmaking and the economy of the storytelling carry the day. The fact that Campanella has directed episodes of Law & Order: Criminal Intent and Law & Order: Special Victims Unit should come as a surprise to no one.