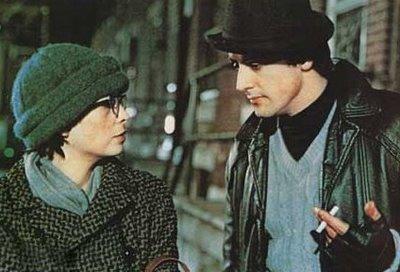 With Creed on its way, I thought it was a good time to revisit the evergreen boxing movies about the Italian Stallion, Rocky Balboa, a Philadelphia fighter from the streets played by an actor/director/screenwriter whose own success story mirrors his character’s arc. Back in the mid-’70’s, a jobbing actor named Sylvester Stallone took his shot at the big time, refusing to sell his screenplay unless he got to play the lead role. The movie was a huge hit, and won Best Picture at the Oscars, with Best Director for John G. Avildsen, and both Stallone and Talia Shire were nominated in the acting categories. Watching the movie again, the first time in decades, it’s Stallone’s performance that really stands out.

The movie is a low-budget gem, so simple it plays like myth: The guy from the run-down Philly neighbourhood who coulda been a contender, except at 30 he’s a bum, working as a heavy for a local loan shark and boxing on the weekends. The World Heavyweight Champion, Apollo Creed (Carl Weathers), wants to give a nobody a shot at the title, confident that he will trounce anyone he faces. This gives Balboa the chance he needs, with Burgess Meredith’s Mickey managing him.

Cue the most famous training montage in the movies, cued to Bill Conti’s “Gonna Fly Now”, and one of Hollywood’s sweetest love stories, between Rocky and Adrian (Talia Shire), the shy girl who works at the pet store, sister of Rocky’s buddy Paulie (the immortal Burt Young). The downmarket locations are perfectly utilized, and the final fight, if not cinema’s most realistic bout, delivers the required feels. I did like that Rocky goes the distance but doesn’t actually beat the champ. That felt right.

The bedrock theme of individualism, of having to lift yourself up because no one owes you anything, couldn’t be more American. Those ideas end up being the constant thread through the series. With his new heft in Tinseltown, Stallone took over the directing of this one, too, and it shows. The first five minutes is the lightly re-edited last five minutes of the first movie, in case we’d forgotten what happened, followed by a hilariously bad exchange where Rocky and Creed, their faces swollen and bloody, both in wheelchairs, exchange a few unkind words in a room full of reporters.

Rocky, flush with the first windfall of his life, spends wildly. In six months he has a car,  a house, and a jacket with a tiger on it, but no more cash. Rocky’s career as a pitchman suffers from his being barely literate. Think he’ll get drawn back into the ring?

Adrian and Rocky are now married, and soon she’s pregnant. Paulie, formerly a meatpacker, has mysteriously become a high roller. Naturally, Creed is hungry for revenge and ticked off by hate mail calling him a chump. Mickey’s face goes from pink to bright purple as he gets up in arms over Rocky’s lack of motivation while training for the rematch, while the movie sets up then ignores the possibility he’ll go blind if he fights again. What was marginally fresh in the first film—given this is a genre going back to forgotten 30s stars like Wallace Beery—feels forced and obvious in the sequel. But the characters are still vivid, and the inevitable bout, when it arrives after some dull hospital drama and the hairiest baby ever, is more compelling than those in the first. Rocky II is more involved and more operatic (if that’s possible) than the previous pugilist picture , even as the final outcome kind of nullifies what was great about the conclusion of the first film. In the third movie, the franchise leaps head first into the 1980s, from grit to glitz, complete with a new, time capsule-worthy  rock theme—”Eye Of The Tiger” by Survivor—and just a little more of a light touch in the melodrama.

After the requisite revisiting of the final scene of the previous film, we get a montage of Rocky’s subsequent title defences and the arrival of his real fame and fortune. He sells American Express, he gets a haircut, a good suit, a portrait by Leroy Neiman (who also cameos), and a Maserati. He’s even on the Muppets!

Of course, all this, even the charitable events, including a friendly tussle with wrestler Thunderlips (Hulk Hogan), makes him go all soft. Only Mickey sees it, and when fresh challenger Clubber Lang (Mr T, the first and only time he was ever genuinely scary) gets up in Rock’s face at the unveiling of the Balboa statue on the steps of the Philadelphia Museum of Art, Mickey tells Rocky he can’t beat him. He got “civilized.” That’s a bad thing. Rocky needs a shake-up, which happens with a combination of personal tragedy, Clubber’s fists, and his former nemesis, Creed, stepping up in a coaching position. All of which works with the same simple genius of the first movie, offering up success as the next challenge for Rocky to overcome. In terms of sheer entertainment value, Rocky III might be the top of the heap.

The excesses of the 1980s run rampant in this, the third sequel to Rocky. Our punchy hero is still living the high life and enjoying semi-retirement, driving a Lamborghini, and buying a talking, cake-serving comedy robot for Paulie. The product placement is egregious, from Baskin Robbins ice-cream to Hugo Boss logos on the athletic gear.

But there’s also the feeling , illustrated in a few of the lyrics of James Brown’s big soundtrack hit “Living In America,” that we should be dubious of all this comfort. It’s a continuance of the easy-living-makes-us-soft ethos of the last movie:

“You might have to walk the fine line,
you might take the hard line
But everybody’s workin’ overtime”

The franchise’s structure remains the same: celebrate the past glories in the first few flashback minutes, and then set up the next challenge: This time it’s Ivan Drago (Dolph Lundgren), an Olympic fighter from the Soviet Union looking to get into the professional ring. Apollo Creed takes him on and pays the price.

Of course, this draws Rocky back to the ring himself. “This other man has not the size, the endurance, or the genetics to win. It’s physically impossible…,” says the Russian giant’s trainer about the Italian Stallion.

Adrian, who had a genuine character arc in the first film, has become not much more than a thankless emotional support system for Rocky. At this point, the franchise feels a little like a cartoon, trading in broad cliches and runaway sentiment—so much montage, so little actual narrative.  Rocky symbolizes heart and truth versus all the evils of the world: totalitarianism, technology, and “the easy way.”

In case we’ve forgotten these lessons, we get a mid-movie montage of scenes from the previous movies, synched to a cheesy rock track, as Rocky drives his Italian sports car through the Second Avenue tunnel in Los Angeles, followed by yet another montage of Rocky training in the snow, sawing logs and climbing mountains, while Drago runs on a track and has a lab full of scientists monitoring his every move. It’s pretty tedious stuff.

Worst of all, the final bout is followed up by Rock giving a speech. This is where Rocky really goes down for the count, despite the return of the director of the franchise’s first film.

We catch up with our hero right after the Russian bout (following the typical montage of past glory, revisiting the last few minutes of the previous film). Rocky hits the showers suffering from a bad case of the shakes. As soon as he’s back on American soil, he’s greeted by his son—played by his actual son, Sage Stallone, who he always calls the Kid, maybe because he can’t remember his name. Funnily, Rocky Jr has grown five years since Rocky was training in Russia in the last act of Rocky IV. Relativity is really a thing.

Rocky gets ambushed at his own press conference by George Washington Duke (Richard Gant), a Don King-esque promoter who wants to set up a fight between Rocky and his own fighter. Rocky’s diagnosed with brain damage, just as the family chump Paulie gets taken by a sleazy accountant, and all the Balboa fortune is weaselled away. They all move back to the old neighbourhood, Rocky gets Micky’s old gym up and running again, and starts training a new fighter, Tommy Gunn (Tommy Morrison), while neglecting his actual son.

The conflict this time is between Rocky and his family, so instead of cheering him we’re shaking our heads at his confusion. Morrison’s a more convincing boxer than actor and doesn’t do much as a villain. and the bullied nice-kid-turned-tough-punk Rocky Jr isn’t hugely compelling either.  The badly written and staged scenes just pile up on one another.

The finale, a street fight outside Rocky’s favourite bar is just pathetic. It does a disservice to the character, and badly misjudges what the audience is looking for from these movies.

If there’s anything to recommend Rocky V, it’s that Talia Shire’s Adrian gets a chance to shine for the first time since 1976. But it feels too little too late. You’ve got to give Stallone credit for the longevity of his most popular creation. Here he brings Rocky back 16 years after the last entry, 30 years since Rocky first showed up on the big screen. Stallone’s also back in the director’s chair and manages to recapture the tone of the series at its best; blue-collar melodrama, underdog sentiment.

It takes awhile to get there. First we have to sit through a sweet but heavily nostalgic tour through Rocky’s past. He’s unable to get over the loss of Adrian, who died offscreen years before, and instead haunts all the old familiar places. Rocky runs a restaurant, entertaining the patrons with slugger stories from the old days, and he’s somewhat estranged from his white-collar son, Robert (Milo Ventimiglia). Rocky gets friendly (in a platonic way, thankfully) with a younger woman, Marie (Geraldine Hughes), who he knows from the neighbourhood, and her son (James Francis Kelly III).

It all cannily plays on the audience’s affection for the character, but even more so on aging Boomers coming to terms with their own mortality. There’s a generous dollop of wish-fulfilment going on here, the idea that the hero, despite being humbled by age, can still compete—while conveniently forgetting Rocky’s brain damage from the fifth film.

When the handlers of the current, unloved heavyweight champ, Mason Dixon (Antonio Tarver), challenge Rocky to an exhibition match, how can he refuse? Apparently the lesson learned in 1985’s Rocky IV by Apollo Creed—you can be too old to go back into the ring—needn’t apply here.

The inevitable training montage and bout in Vegas is unabashedly familiar territory, but Stallone’s learned a thing or two about directing through the years. He delivers a respectful and tonally perfect conclusion to Rocky’s cinematic journey.

Until Creed, opening this week…